On its 50th anniversary, Mercedes decided to celebrate its success of the past and the present in a unique manner. At the 2017 Geneva Motor Show on Tuesday, the German company announced the latest edition dubbed the Mercedes AMG GT Concept. This model has a low-flung, fastback sedan design which resembles the AMG GT supercar. The four-door version was displayed in a bright red livery which offered the audience a sneak peek about the same. Even though AMG was acquired by Mercedes-Benz almost a decade ago, it works independently with some support from the automobile giant.

Its upcoming production will be developed independently by AMG. This model is the third completely independently developed sports car by the international automobile manufacturer. The car manufacture is on the basis of the alternative drive configurations by AMG. The production will take place autonomously at AMG’s headquarters situated in Affalterbach, Germany. In order to retain the identity of the AMG GT supercar range, the designation and fundamental design elements on the front and the tail end are similar to the previous models. The latest model is a hybrid of the SLS AMG and AMG GT models in terms of exterior design. It consists of a front and rear fascia with a steeply raked windshield. 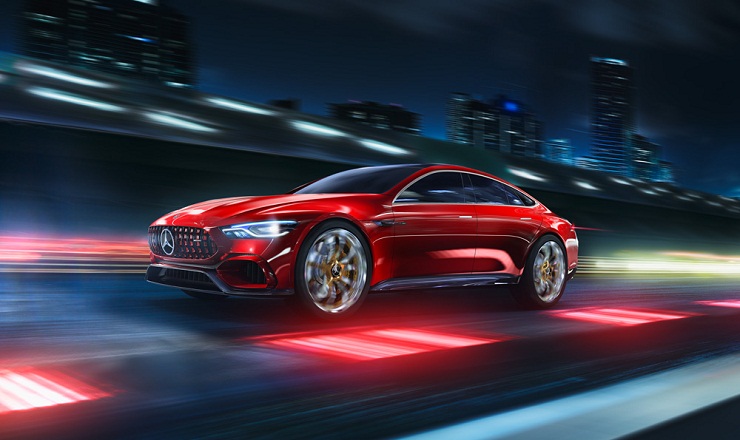 Currently, the AMG GT lineup only focuses on the gasoline-fired power. But the Mercedes AMG GT Concept will offer a hybrid powertrain which got its inspiration from the Mercedes AMG Formula One cars. The total system output of the car including the electric motor and the 4-liter twin-turbo V8 equals up to 805 horsepower. AMG has labeled this kind of technology EQ Power+. All automobiles developed with this type of technology in future will also have this name. The manufacturer claims that this sports sedan can speed up to 60 mph in under three seconds.

The Mercedes AMG GT Concept comes with a spacious luggage compartment and a comfortable yet roomy interior. As it comes with an electric-only mode, one need not worry about charging this supercar every night. Also, the battery will charge on the go just like the Formula One cars. The battery charging will take place during braking or when the combustion engine drops down its power usage. This is to ensure maximum performance at all times. It includes a version of the 4MATIC all-wheel drive which will ensure balanced torque distribution. 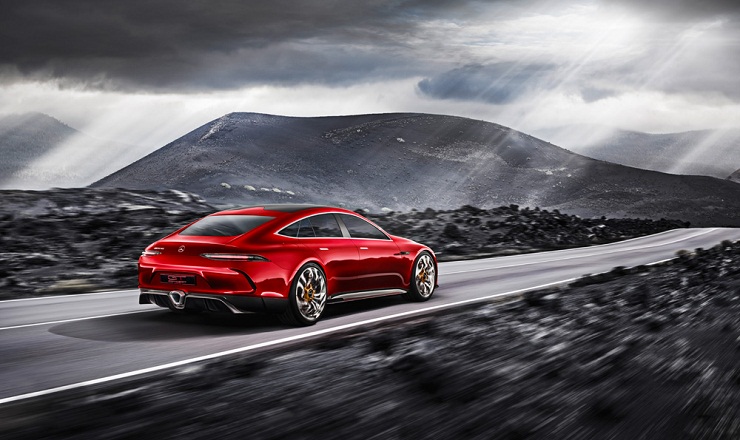 The exterior design is in sync with the sleekness of the brand.

A heavy sedan with high power running on electric battery seems to be an impressive piece of technology. The stylish and sleek design adds to the appeal of this AMG model. There is no announcement of the price range or the production plan. But rumors suggest that its production might begin somewhere in 2019. The Mercedes AMG GT Concept might stand out as it’s a combination of a luxury sedan with high power.