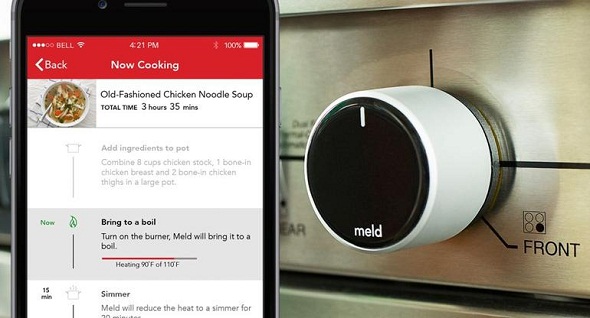 The smart home has already got products like the Nest thermostat and August smart lock making the home safer and smarter. Next on the list of smart home devices is Meld, a new way to ensure food is cooked at the right temperature.

The Meld smart knob can turn the existing hob into an app-connected cooker and adjust burner cooking temperatures automatically. The makers claim the technology is congruous with almost all ovens and will let any hob to be set to the perfect temperature to make any dish.

It’s a Kickstarter project that has already reached its $50,000 (£33,500) goal with more than a month of fundraising still to go. The invention is the brainchild of former engineers and product developers from Amazon and Pinterest who are based in Seattle.

The Meld actually consists of three parts: the knob itself, which replaces an existing hob control; the Meld Clip, that attaches to nearly any pot to measure the temperature of what’s being cooked and the Meld app, which is used to automatically control the heat based on what is cooking.

The technology works well with both electric and gas ranges. It can handle a variety of cooking such as, slow cooking, simmering, poaching, candy making, sous vide and frying. In the future, Meld could also include support for processes like grilling, baking, microwaving, and sauteing, the makers said.

The app, for its part, comes with a number of presets for popular recipes such as braised pork belly, piri piri chicken and even soft-boiling an egg.

While researching the product, the Meld team found the cooking instructions like cook at medium heat were equivocal, especially when medium settings on hobs can differ as much as 35C.

The team explained on Kickstarter that they needed to find a way to consistently ascertain the accurate temperature along with the ability to swiftly make adjustments to the burner. They wanted the technology to do away with the guesswork, so the cook could concentrate on the art.

The app, which will run on Android and iOS, tells the system what’s on the hob. The app can also be configured to manually control the knob for staple dishes.

For $129 or $99 for early-bird funders get the knob and clip, which can be shipped to any part of the world. Delivery is scheduled for May, after which the system is expected to retail for $149.

Anna Domanska
Anna Domanska is an Industry Leaders Magazine author possessing wide-range of knowledge for Business News. She is an avid reader and writer of Business and CEO Magazines and a rigorous follower of Business Leaders.
« Researchers develop aluminum battery that could charge smartphone in 60 seconds
Dell Launches Venue 10 7000 Tablet, Starts At $499 »
Leave a Comment
Close