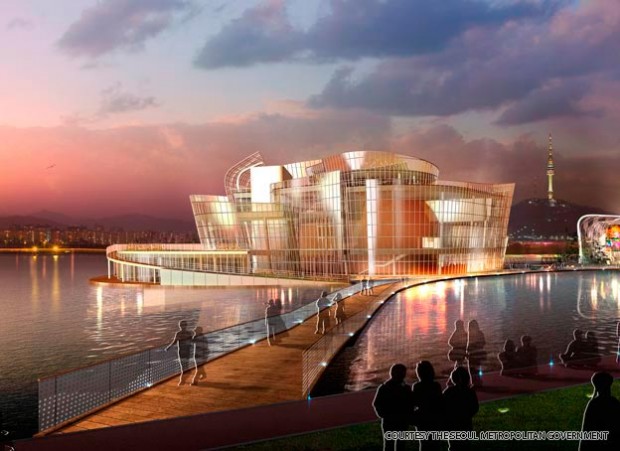 With a 700 seat convention hall, restaurants and arcades, all powered by solar energy, Seoul has launched what is likely to become South Korea’s hot new tourist destination.

Part of a group of three completely man-made islands, Viva, launched earlier this month demonstrates the Seoul Metropolitan Government’s commitment towards revitalizing recreational areas in a commercially viable manner, while preserving ecology and even making a statement to the world about the increasing use of alternative energy in South Korea.

Also being dubbed as “the rebirth of the Han River”, the Floating Island intends to revolutionize the recreational life of Seoul.

Located near Banpo Bridge on the Han River in the heart of Seoul, the “Floating Island” comprising three mega man-made floating islets, the other two besides Viva, called Vista and Tera, will be launched sometime in August according to Government officials.

Kim Hyeong-keon, a city official involved in the project, said that the three islands are being designed with the purpose of being used for international conventions, as well as for recreational purposes such as water sports activities, fine-dining, performances and exhibitions.

As opposed to artificial islands, like the ones in Dubai, which are built by layering up sand on the ocean floor, Viva and its satellite islands float on the surface of the river, being buoyant and not anchored. What this means is that in case of a flood, the islands will rise and fall with water levels, not be flooded over like the man-made “anchored” islands. 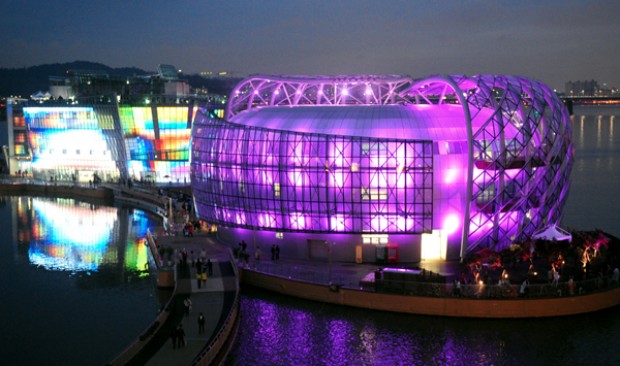 Also, the floating isles are equipped with a high-tech tracking system, which would closely monitor these changes, alerting a controller in case the islands float too far from their home site due to changing water levels. In case an island moves away more than one meter away from its original location, it will be automatically returned to its home site by the tracking system.

24 airbags, each measuring 2 meters in diameter and 12 meters in length are placed under Viva’s giant buoy. Made of a special rubber that can support a 2,000-ton buoy, these airbags keep Viva afloat. Additionally, Viva would be harnessed to a 500-ton concrete block embedded in the river bed with metal chains so as to prevent Viva from moving or washing away.

The same technique is used to keep the other two islands floating in place.

According to Government officials involved in the project, the tightness of the chains harnessing the islands to their respective concrete blocks are designed to automatically control the island. The metal chains of the floating islands would automatically tighten to keep the islands in their original positions, in case a flood raises the water level more than 16 meters.

With only 80 centimeters of the buoy submerged underwater, Viva presents a capacity of accommodating facilities weighing up to as much as 6,400 tons.

All facilities on Viva are contained within a three-storey building which is covered with 54 square meters of solar panels. These panels together produce 6 kilowatts of energy each day, and are able to power the facilities below with electricity, while also illuminating the building facades at night.

The $83.9 million of total investment in this project has come from the city government and a consortium of other construction companies.