German automaker Mercedes-Benz recently gave us a glimpse of an autonomous bus concept, its vision for the future of public transportation. Originally named the Mercedes Future Bus, the landmark vehicle combines connected data, camera, and radar systems to drive itself.

The bus itself is based on the company’s 12-m (39-ft) long Citaro bus model which is widely used in cities around the world. It is powered by a 220-kW (299-hp) Mercedes-Benz OM 936 in-line six-cylinder engine. At the heart of this concept is CityPilot, the company’s system for autonomous driving that is layered onto the vehicle. The CityPilot uses almost a dozen different cameras located on the bus, along with GPS and two different radar systems. 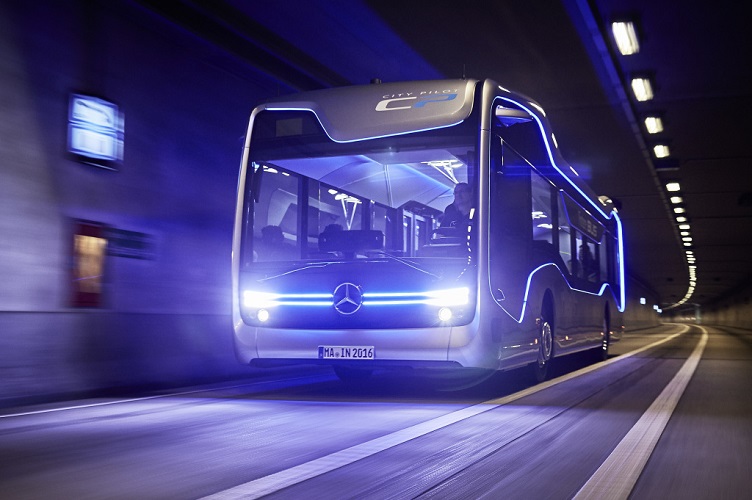 It is designed to navigate through busy areas with lots of people and junctions with traffic lights. Besides, street-light recognition, it’s capable of stopping and unloading passengers without the intervention of a driver. The bus can also brake on its own, automatically open and close its doors, navigate through tunnels and recognize obstacles in the road. In addition, there’s a seat and a wheel for the times when human intervention is absolutely necessary. It has a top speed of 43.5 miles per hour.

The autonomous bus has navigated across a Bus Rapid Transit route from the Netherlands’ Airport Line 300 Schalkwijk Centrum bus stop into the city of Haarlem, a more than 12-mile drive with bends, tunnels, and traffic lights. The company says the driver’s intervention is required only when the bus faces oncoming traffic, in line with local laws, and does not need to take control in any way, though the human driver remains in place at all times. According to Mercedes, the new concept is a milestone on the way to the autonomous city bus.

The interior design of the Mercedes Future Bus has an open layout that is said to have been inspired by city squares and parks. There are three kinds of zones that accommodate people based on how long they will be on the bus, with designer seats, upwards-branching grab rails, and ceiling lights that resemble a leaf canopy.

However, with the design showcased, it appears that the Mercedes Future Bus will not be able to accommodate all that many passengers, as the company has chosen an airy and open layout over one that expands seating space.

Passengers will be boarding and disembarking the bus through two sets of double-width doors halfway along the body of the bus. Green luminescent bands signal which set of doors should be used when entering or exiting and red bands show which shouldn’t be used. This, along with an electronic ticket system and the position of the doors, is used to expedite passenger flow.

According to the company spokesperson, the bus is just a technological demonstration and not planned for public use, though its systems could be used in production. The bus is said to be on display in September at the IAA Commercial Vehicles show in Germany.