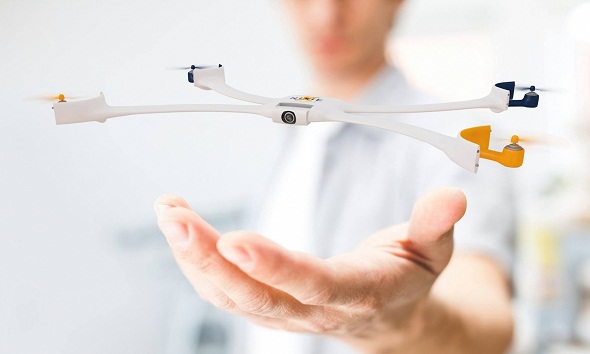 The wrist-mounted drone has scooped the $500,000 grand prize at Intel’s Make it Wearable Challenge

Wearables have become the new modern gadgets. From GoPro camera to Google Glass wearable eyepiece, every company in tech is either making them or designing businesses around them. But now the developers of a new quadcopter drone have developed what could be the world’s first wearable drone that can fly high to take photographs.

Called Nixie, this flying camera is aimed at rock climbers. The Nixie quadcopter is worn wrapped around the wrist like a watch, but owing to a range of sensors powered by Intel’s Edison chip it can dismount from the users arm, spring into the air and take pictures from hard-to-reach places and fly right back again and then syncs with the owner’s smartphone.

The wrist-mounted drone has scooped the $500,000 grand prize at Intel’s Make it Wearable Challenge, after an open call for new wearable technology ideas that use the company’s flagship microchips.

In January, Intel CEO Brian Krzanich launched the Make it Wearable contest to encourage entrepreneurs and hobbyists to use Intel’s chips to develop different kinds of wearable technology. The grand prize is intended to help and encourage the winners to introduce their prototype into the market.

“This was an experiment to see what we could do in this space and see what kind of creativity we could spawn,” Krzanich said at an event on Monday. “The real value in this was the diversity of the teams and ideas.”

Developed by Christoph Kohstall, a Stanford University physics researcher in the US, and Jelena Jovanovic a former employee of Google, Nixie is still in the prototyping phase. But developers say it will weigh less than a tenth of a pound and will be able to capture HD (high-definition) quality images.

“We all use pictures to capture our moments,” said Nixie’s Jelena Jovanovic. “We use the tools we have available and we’ve been doing it as long we’ve been human.”

Nixie sports a panorama mode for aerial 360° arcs, boomerang mode in which it flies off, takes pictures at programmed fixed distances from the owner, a follow me mode for following the owner while they are in motion, and a hover mode for near-impossible high shots.

While Nixie is simply a concept at this stage, it does raise some questions, Will Nixie be able to identify the owner in a crowded place? And most importantly, will it be able to integrate in its owner’s daily life? After all, a wearable drone camera will only succeed if one can actually wear it.

EU antitrust regulators are planning a formal investigation into Google’s digital advertising practices by the end of this year. Google is already facing unprecedented regulatory
1 hour ago