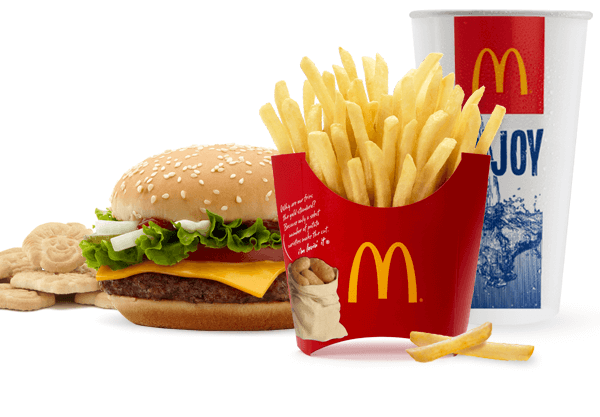 McDonald’s on Thursday, revealed plans to offer customers the choice of a salad, fruit or vegetable   as substitutes for french fries in its value meals at no extra cost. It will roll out the change in the U.S market in 2014.

The world’s largest hamburger chain made the announcement in partnership with the Alliance for a Healthier Generation, a non-profit organisation founded by the Clinton Foundation and the American Heart Association to reduce childhood obesity in New York City, where CEO Don Thompson made an appearance on stage along with former President Bill Clinton.

In an interview before the announcement, Thompson said McDonald’s is trying to develop other healthy options that will appeal to customers. He stated that the company could also take the fruits and vegetables it offers in other parts of the world, like cups of corn and kiwi on a stick, and make them easily available worldwide.

“We think we can influence the purchase of fruits and veggies,” Mr. Thompson said in an interview. “We have a leadership role and we can be part of a solution. The average person eats at McDonald’s three times a month.”

McDonald’s said it would endorse only water, milk and juice rather than soft drinks for Happy Meals on its menu boards and in advertising. The chain will emphasize nutrition in its packaging and all advertising to kids will include a “fun nutrition or children’s well-being” message.

The latest effort to promote healthier choices comes as McDonald’s continues to face criticism from activists forbids its marketing to children and also to improve the nutrition content of its meals. To keep pace, McDonald’s recently started offering customers the choice to substitute egg whites in all its breakfast sandwiches. It also came out with chicken wraps, which are partly meant to go after people who want their food fresh and healthy.

Toward the end of last year, McDonald’s reported its first monthly sales decline in nearly a decade. Ever since the company has struggled to push up the sales figure.

According to a latest study by the Robert Wood Johnson Foundation, it was found that the fast food chain’s ads which target kids often emphasized toy giveaways and movie tie-ins, instead of food.

McDonald’s Corp has more than 34,000 locations globally. It said the changes will take place in 20 major markets. The company said they will be in place in up to half the markets within three years and all the designated regions by 2020

Anna Domanska
Anna Domanska is an Industry Leaders Magazine author possessing wide-range of knowledge for Business News. She is an avid reader and writer of Business and CEO Magazines and a rigorous follower of Business Leaders.
« Alibaba decides to move IPO to the US
eBay to buy online payment platform Braintree »
Leave a Comment
Close