McDonald’s to add Mighty wings on its menu 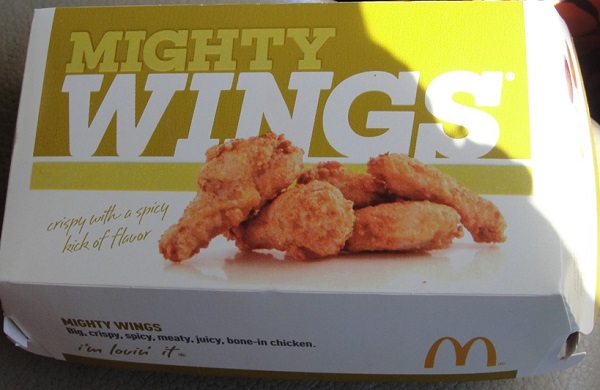 McDonald’s the world’s most popular hamburger chain is getting into the chicken wing business. After several months of testing in Chicago, McDonald’s is preparing for a nationwide rollout of its “Mighty Wings” next month, the company has confirmed.

After a successful test run in Atlanta, McDonald’s will launch Mighty Wings nationwide on Sept. 9, according to a statement from the company.

The Big Mac seller will start the Mighty Wings rollout Sept. 9, have the items in all U.S. stores by Sept. 24 and keep them on sale through November.

The bone-in wings are flavored with cayenne and chilli pepper and they come with nine types of sauces including creamy ranch, honey mustard and tangy barbecue. They will be sold in three-, five- or 10-piece packs, starting at $2.99.

The chicken wings are just the latest in a slew of new products McDonald’s has rolled out in the last year. They include the premium chicken McWraps, egg white Delight McMuffins and blueberry pomegranate smoothies.

By some estimates, wings rank among the fastest-growing category for food-on-the-run restaurants — with sales topping $8 billion in 2012, reports GuestMetrics. That’s up 11% over a year earlier, the research firm estimates.

“Wings is a major move” says Scott Hume, editor of the BurgerBusiness blog, which broke the news Monday. “It’s like the Colonel adding a cheeseburger.”

Monday’s announcement by McDonald’s “continues the blurring of the lines between burger, chicken, sandwich and pizza chains,” says Hume.

And it’s a bid by McDonald’s to juice tardy sales that have afflicted most fast-food companies in recent months. “The market is such that chains need menu news continuously, not occasionally,” says Hume. McDonald’s executives believe Mighty Wings will be a hit with their customers.

McDonald’s wings will be on the market just around the start of the football season, which is also wing-eating season. Prices for wings on the wholesale market “trend up as you go into football,” Buffalo Wild Wing’s CFO Mary Twinem said on an earnings call in late July.

The world’s largest restaurant chain’s shares rose 0.2 percent to $95.31 at the close in New York. The shares have gained 8 percent this year, while the Standard & Poor’s 500 Index has advanced 16 percent.

If Mighty Wings are a success, McDonald’s is going to have to figure out where all the wings will come from. This is partially the reason behind a limited-time roll-out, for now.

Jay Raol
« New Sony PlayStation 4 With Great Features To Be Launched On Nov 15
Vodafone and Verizon are to start talks for U.S. Wireless Stake Sale »
Leave a Comment
Close

EverGrande is now known as the “world’s most indebted property developer” and serves as a symbol of corporate excess.
18 hours ago