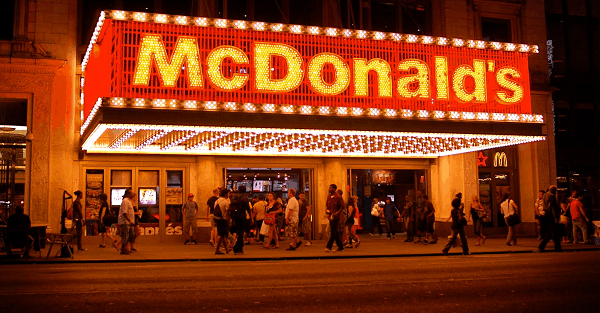 McDonald’s Corp., the world’s biggest fast-food chain, posted a fall in global sales figures. According to a statement, the company saw the first drop in sales in almost 10 years. Certainly McDonald’s is struggling to keep growing amid unsteady global economic conditions.

After almost 10 years of monthly sales increases, at last McDonald’s Corp. experienced overwhelming sense of  its arch rivals’ presence and the shaky economy as it reported a 1.8 percent global comparable sales decrease for October. The McDonald’s drop in sales is the first one since March 2003. The world’s biggest fast-food chain saw a drop in sales not only in the United States and Europe, but also in the markets of the Middle East, Asia and Africa as well.

According to compiled data, monthly sales in stores open at least 13 months dropped by as much as 1.8 percent in the month of October, showing challenging global economic conditions. Data showed that same-stores sales slumped approximately 2.2 percent in the United States and Europe and decreased roughly 2.4 percent in the Middle East, Africa and Asia Pacific region. McDonald’s Corp. saw an increase in sales in Canada.

Analysts indicate several reasons why McDonald’s  Corp. saw a sharp drop in sales. One of them is without a doubt the soft economy. Customers are struggling with the unsteady economic conditions and decide not to eat out as they simply cannot afford it. This factor especially applies to the younger consumers, who have been facing high unemployment.

In addition, McDonald’s Corp., which is the worldwide fast-food chain, has also been hit by the economic weakness in Europe. According to data the market of Europe accounts for as much as 40 percent of McDonald’s revenue and operating profit.

Also the reemergence of stronger competition from its arch challengers, who had been strongly hit by the global economic crisis, affects the McDonald’s performance. The company’s competitors have been rolling out new ideas which simply lure customers back to their restaurants. For example, Burger King Worldwide Inc. have been introducing new sandwiches , not to mention that it has not forgotten about discounts for its customers. Wendy’s Co. has decided not only to add new menu items and offer discounts, but also its restaurants have been revamped.

Analysts note that McDonald’s Corp. cannot find itself in the new environment. Its new menu items are not good enough. On the other hand, its arch rivals including Burger King, Wendy’s, Taco Bell and Domino did they homework and because of that they simply reap.

Time for a change

The drop in McDonald’s sales in October followed a decrease in company’s profits for the third quarter. But the responsibility for the drop in sales is shifted on Don Thompson who became chief executive officer at McDonald’s Corp. back in July.

The figures certainly will pressure him to take an action in order to minimize losses and reenergize McDonald’s Corp. Probably he will have to break his promise to continue the strategy developed in 2003. Yet changes are inevitable if McDonald’s wants to stay in the game.

Christy Gren
Christy Gren is an Industry Specialist Reporter at Industry Leaders Magazine she enjoys writing about Unicorns, Silicon Valley, Startups, Business Leaders and Innovators. Her articles provide an insight about the Power Players in the field of Technology, Auto, Manufacturing, and F&B.
« Shares of Asia slump on concerns over US fiscal cliff
Chief of BBC Quits over Failures Regarding Shoddy Journalism »
Leave a Comment
Close