McDonald’s Hall of the Zodiac: Lunar New Year 2022 bridges the gap between the physical and the virtual worlds.

McDonald’s lit up the metaverse to celebrate the Chinese Lunar New Year 2022.

The Lunar New Year took on an otherworldly glow as companies clamored to celebrate it in the metaverse. The Chinese New Year celebrations kicked off on January 31.

McDonald’s and the Metaverse New Year

This year, McDonald’s partnered with Opening Ceremony brand co-founder Humberto Leon to bring the Chinese New Year to people’s homes. The Lunar New Year is a holiday predominantly celebrated in Southeast Asia, and by the East Asian diaspora. 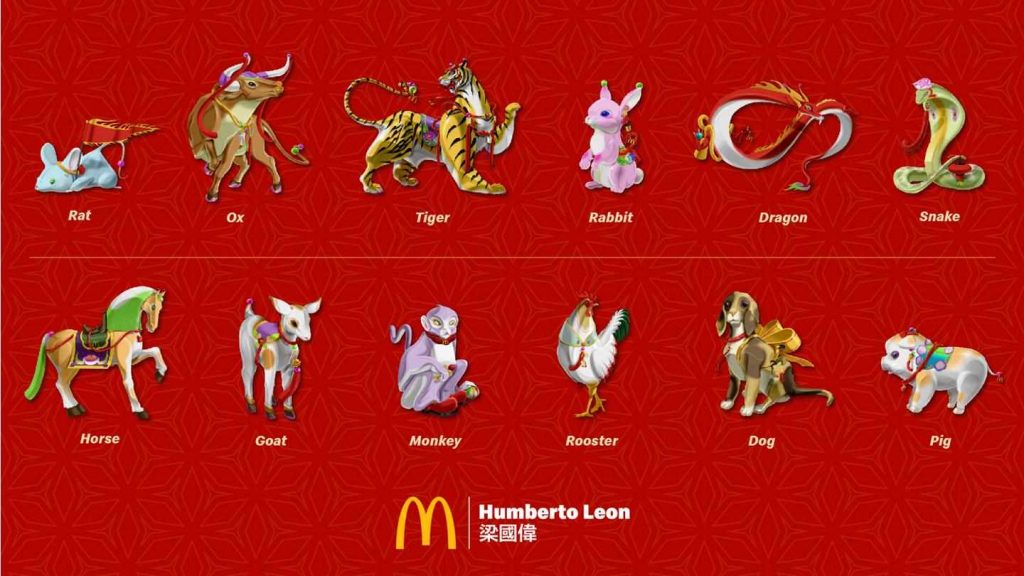 The 12 animals of the Chinese Zodiac have been reimagined by Humberto Leon.

The designer virtually captured the likeness of all 12 animals of the Chinese Zodiac —the rat, ox, tiger, rabbit, dragon, snake, horse, goat, monkey, rooster, dog, and pig —wherein each of the animals are linked to a year. It is believed that the Jade Emperor selected these 12 to be his guards. The designer managed to customize the likeness of all animals for metaverse. Users can walk in to a large hall where the Water Tiger is enshrined in the middle, surrounded by the remaining eleven. People can take their time exploring the room and observe the animals.

On his recent collaboration, Humberto Leon commented, “Lunar New Year is not only a time to celebrate with family and friends, but also gives us Asian Americans the perfect opportunity to share our cultural heritage with people throughout the various communities we call home. Partnering with McDonald’s means a lot to me because it’s a brand that has always been committed to embracing and celebrating the universality of all cultures, helping me see myself in the brand and in the world. Kicking off Lunar New Year with McDonald’s in a way that underscores the creativity and innovation of the Asian American community, makes me proud to offer a true expression of my identity and the influences that have shaped it, to which I know many will relate.”

Those who want to get their fortunes read can enter their birth year and corresponding animal to find out what the year has in store. The McDonald’s Hall of the Zodiac: Lunar New Year 2022 is an immersive experience that can also be customized, after users create their own account. The exhibition is available on two virtual reality social platforms, AltspaceVR and Spatial, and users can access them till February 15, the duration of the Chinese New Year celebrations. The Hall of the Zodiac is available at mcdhallofzodiacs.com and is accessible via mobile and desktop.

McDonald’s move is significant as it heralds companies’ move toward virtual reality, and shows us that the hype around metaverse is here to stay. The fast-food chain has also collaborated with the designer to create an exclusive line of limited-edition merchandise that features the tiger illustration.

What is the Metaverse

Metaverse refers to a completely digitized world that can mirror the physical world and can be used for social connection. It sounds like science fiction but is fast becoming a reality, with many big brands entering the space.

Ark Invest’s Chief Executive Officer Cathie Wood believes that the metaverse will soon be an essential part of our daily lives. She states, “It’s a big idea that will probably infiltrate – just like technology is, anyway —every sector in ways that we cannot even imagine right now.” Many believe that metaverse is well on its way to becoming a multi trillion-dollar industry.

Meanwhile, even Facebook Messenger launched a variety of new tools to help users celebrate the new year. A sticker pack featuring images of tiger keeping in mind the Year of the Tiger theme, designed by Naomi Otsu, was also made available, along with other AR effects. Chat themes and word effects were also popular as people used the opportunity to wish each other through the app, which had enabled users to send red envelopes using their 3D avatars.

Christy Gren
Christy Gren is an Industry Specialist Reporter at Industry Leaders Magazine she enjoys writing about Unicorns, Silicon Valley, Startups, Business Leaders and Innovators. Her articles provide an insight about the Power Players in the field of Technology, Auto, Manufacturing, and F&B.
« Small Business Trends for 2022
Global Supply Chain Crisis to Continue to 2023 »
Leave a Comment
Close