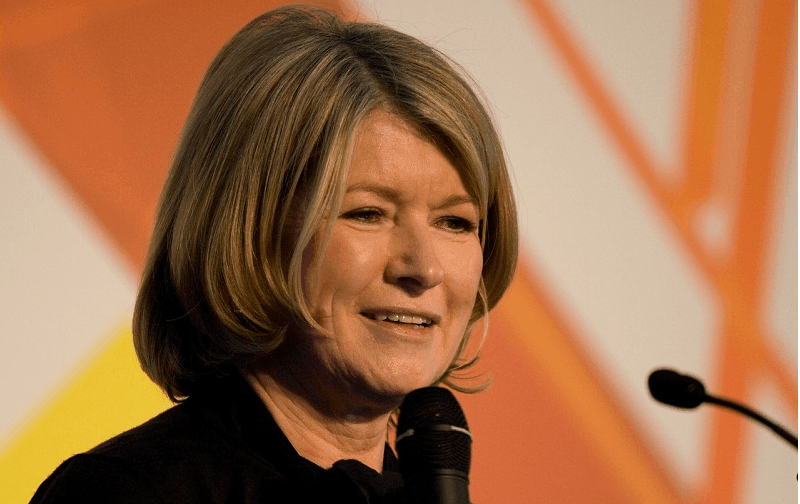 Martha Stewart is an American entrepreneur, writer and a television personality. She is also the founder of Martha Stewart Living Omnimedia. Many people rely on her as a source of helpful “how-to” information. Through her work, she helps people as a guide for everyday living – cooking, home renovating, entertaining, gardening, collecting, crafting, organizing, holidays, pets, and healthy living.

Martha’s image as the epitome of gracious living may lead some to imagine that she grew up with utter sophistication. In fact, she was born in Jersey City, New Jersey, a place known for heavy industries. Her mother was a schoolteacher and father Edward Kostyra was a pharmaceuticals salesman. When she was three, they moved to Nutley, New Jersey. She was second among the six siblings who all grew up in a Polish-American family. At an early age Stewart was taught many skills – her father taught her gardening; her mother taught her sewing and cooking; her grandparents taught her to keep up the preserves, and she learned to makes pies from bakers next door.

In 1961, Martha married a law student, Andrew Stewart. In 1967 Andrew Stewart became the founder of a publishing house. He also served as a chief-executive of various other publishing houses. In 1976, she started her catering business with Norma Collier, it was a huge success. Later in her career she started her own food store, after gaining some experience by working at a gourmet store. Meanwhile, she was introduced to Alan Mirken from Crown publishing house at a party. Mirken was highly impressed from her skills and knowledge, which lead to a book deal.  In 1982, she released her first book, Martha Stewart’s Entertaining. The book illustrated all the recipes and photos from the parties she previously hosted. It became the best-selling cookbook since 20 years. Many more books on weddings, Christmas, hors d’oeuvres, gardening, pies and restoring old houses followed her best-selling list. She also worked as a columnist and editor for the magazine “House Beautiful” and “Family Circle.”

In spite of her divorce in 1989, she founded her magazine ‘Martha Stewart Living’ in 1990, published by Time.Inc. She was the editor-in-chief of the magazine and its first issue was released in winter 1990. Huge success of this publication lead to a television show also entitled the same in 1993.The show was broadcasted daily for an hour, and half-hour for the weekends. Her television appearances made her a one-woman industry. Stewart was also engaged into merchandising and licensing operations; she signed a contract for $5 million with Kmart for advertising and consulting.

In 1997, she bought all of the broadcasting, publishing, merchandising and licensing ventures bearing her name and merged them into a single company, Martha Stewart Living Omnimedia (MSLO). In 1999, the share price of MSLO was doubled on the first day of company going public. Stewart reserved highest number of shares in the company, while being a President, Chairman and CEO.

Martha was also a board member of New York Stock Exchange, but had to leave her seat after she was accused of violating insider trading rules by U.S. Securities and Exchange Commission. MSLO made huge losses due to lengthy investigations and fall in its share price.  Stewart was found guilty and was sentenced 5 months of imprisonment followed by 2 years of supervised release including 5 months of electronic monitoring.

What sets Martha apart is her autocratic leadership style. She remains very particular and demanding on her staff. But she pays personal attention to every aspect of her business. Whether you like her or not, she has been very successful in her comings and goings, using her autocratic management style. She has a shining self-made empire, all made with personalized attention.

Martha is considered as the guru of good taste in America. She has turned her tastes and lifestyle into a very successful business empire. Martha has revolutionized the state of mind and the American’s way of life through how-to and self-help guides. Although, she does not allow anyone to have a final say about anything she is involved into, may it be her peers or her staff. She will do things the way she wants to, without asking for anyone’s opinion. She is very clear about what she wants and how she will achieve it – a perfect example of autocratic leadership. Her leadership style is the reason behind a girl from a middle class family is now at the top of the corporate world.

Today, Martha Stewart Living Omnimedia operates in four major areas: broadcasting, publishing, internet and merchandising. Over the years, Stewart has been patient and determined to build and preserve her business empire. While MSLO continues to thrive, Martha has a major influence on how Americans eat, entertain and decorate their homes than anyone else in the history.

Christy Gren
Christy Gren is an Industry Specialist Reporter at Industry Leaders Magazine she enjoys writing about Unicorns, Silicon Valley, Startups, Business Leaders and Innovators. Her articles provide an insight about the Power Players in the field of Technology, Auto, Manufacturing, and F&B.
« Best designed products of 2015 to marvel over
Productivity Tips to Achieve Inbox Zero »
Leave a Comment
Close