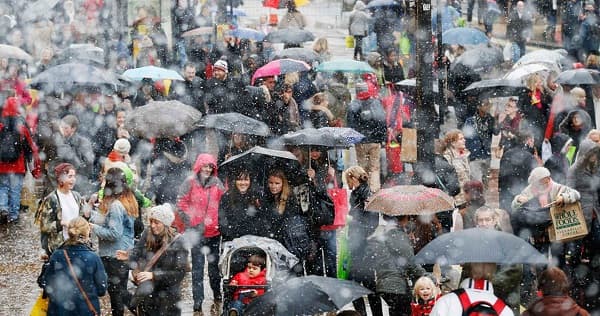 Newest figures on UK retail sales are certainly unsatisfactory. The unprecedented chilly weather in March had a negative impact on retail sales as it significantly discouraged British customers to go shopping. Thus the ONS survey also added to disturbing signs about the UK economy.

On the 18th of April, the Office for National Statistics released its report on UK retail sales in March, indicating that the results were much affected by the adverse weather conditions. According to the report by the ONS, the UK saw its March retail sales slump approximately 0.7 percent from a month earlier when they climbed more than  2 percent. The recorded result was more or less consistent with analysts’ expectations. As for a year-on-year basis, the UK retail sales decreased around 0.5 percent in March.

Analysts note that these disturbing trends should not be surprising, taking into account wage growth and the level of inflation which had a great impact on consumer spending, thereby hitting UK retailers as well.

Furthermore, the Office for National Statistics highlighted that excluding fuels, UK retail sales plummeted around 0.8 percent in March on a month-on-month basis.  On a year-on-year basis, they surged roughly 0.4 percent. Detailed data showed that non-food sales dropped staggering 4.0 percent in March. Interestingly, clothing and footwear slumped slightly over 3 percent while the country saw household products sales drop sharply by approximately 6.2 percent.  On the other hand, the UK witnessed an increase of 0.9 percent in sales at food stores.

As it was underlined by the Office for National Statistics, the chilly weather in March had horrendous effects on UK retail sales, particularly in the non-food segment. The ONS underscored: “Feedback from department stores, clothing stores and household goods stores suggested that sales were dampened by the weather as they prepared their stores for the spring season.”

The results by the ONS might be rather surprising, taking into consideration the figures issued by the British Retail Consortium. The BRC survey indicated that UK retail sales climbed 3.7 percent on a year-on-year basis. Yet some analysts underscore that the pessimistic results were widely expected owing to the chilly weather.

In addition, confidence is still low, according to different surveys. Analysts hold an opinion that a rebound in confidence will not happen in the near future.

Not surprisingly, the ONS results on retail sales illustrated also the disturbingly weak conditions of the UK economy in the first quarter ended March despite the fact that the country saw modest growth in the period.

Indeed, the situation is not colorful as the International Monetary Fund revised down its forecast for the United Kingdom earlier in April. The organization has already advised the Bank of England to think though introducing some stimulus measures. Yet the decision-makers at the BoE are not convinced whether the institution should expand stimulus.

Anna Domanska
Anna Domanska is an Industry Leaders Magazine author possessing wide-range of knowledge for Business News. She is an avid reader and writer of Business and CEO Magazines and a rigorous follower of Business Leaders.
« Gold Slides down with $560 Billion from Central Banks Equities Rally
Toyota to expand with production of Lexus in U.S. »
Leave a Comment
Close