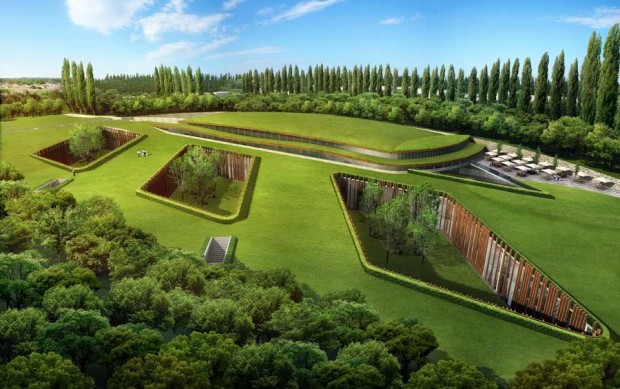 A Green Buff looking for a luxury golfing vacation ? This is absolutely the place for you !

With the ambitious goal of designing a sustainable luxury hotel and spa that meets the requirements of London’s Green Belt, the Hersham Golf Club n Surry, UK, has joined forces with international hotel and resort architects RearsdonSmith to submit a proposal for a five star subterranean hotel.

And given the area’s strict planning guidelines, the team has come up with the idea to build all 200-plus guestrooms underground. Looks incredibly inviting to me!

The underground hotel will have 198 rooms, a spa and subterranean parking facilities. The development will also include improvements to the golf course, a new club house, bars, restaurants and business and conference facilities.

“The design fulfills the requirements of the brief for a bespoke five star hotel while returning hard standing to the Green Belt and improving the physical layout and visual attraction of the entire site,” stated RearsdonSmith designer, Matthew Guy. “It represents a commercially viable solution to developing in the Green Belt and is, we believe, a world-first.”

The Hersham Golf Course underground hotel and spa development, the conceptual design for which and was unveiled by ReardonSmith Architects in December 2009, will be executed by Claudel Venture, part of the international leisure company Arkin Group, which acquired the 108-acre Hersham Golf Club in 2008.

Mr Cahit Atasoy, CEO of Arkin Group Developments, said in a statement, “Our vision is to create a stunning boutique hotel and spa destination that will be truly unique and prestigious. It will blend into the natural woodland setting and enhance and increase the level of green landscape. At the same time the Golf Club will be improved and remain an inclusive and open amenity for the local community.”

The project scheme will see a gross area development of about 22,107m² and an additional 10,194m² car parking area. The project is estimated to cost £72m.

We’ve always been massive fans of feel-good things and places which involve “betterment of the environment” as one of their critical design components.

So what do we especially love about the Hersham Golf Course Underground Hotel ? That it will not only preserve but also improve the Green Belt of the course area by 33%.

Designed so as to blend in with its natural surroundings so well that it lost sees as if the hotel came first and the golf course sort of grew over and around it, this underground hotel and spa will be concealed by a plush, green living roof and reflect the undulating golf course landscape.

Siddhartha Bhatia, Project Leader, ReardonSmith Architects, summed up this focus of sustainable design when he said “Our aim is to design a five-star hotel that is commercially viable while being sensitive to the demands of the ecosystem. Through the combination of innovative design and intelligent building technology we are replacing existing surface buildings with subterranean ones and, in effect, visually returning land to the Green Belt.”

The hotel’s guestrooms will be built in three rings below the ground level and around the sunken garden courtyards. The 800m² landscaped courtyards will allow natural light into the rooms through a glazed façade.

Public spaces will be visible on the ground level with restaurants and leisure spaces. The golf club will use less light emission techniques to reduce the lighting level.

The entire development will be within the existing woodland enclave and out of sight of local residents. The golf course, landscape and one level of public area will be the main visible forms of the hotel and golf club development.

Built to reduce the overall carbon footprint, the development will include a combined heat and power generation installation, grey-water recycling facilities, ground-source heat pumps and heat exchangers, and rainwater harvesting, exerting a significantly smaller pressure on resources as compared to a traditional five-star hotel.

5-star hoteliers, lots to learn from !