A London-based startup Lix, has created the world’s smallest 3D-printing pen that allows users to doodle in the air.

A devise is said to have created a stampede on Kickstarter, which having collected nearly £170K than its initial £30K funding goal roughly within 24hours of its launch. Described as a 3D printing pen or manual micro 3D printer, the 16.4-centimeter long Lix is like any other pen with a very slim aluminum body and is 40grams in weight. The pen can be charged using a power cable that can plug into any USB port.

The lines drawn are created using two different types of plastic filaments which is ABS and PLA. ABS and PLA are melted within, creating a liquid plastic ink which later cools and then solidifies providing very solid lines upon drawing. 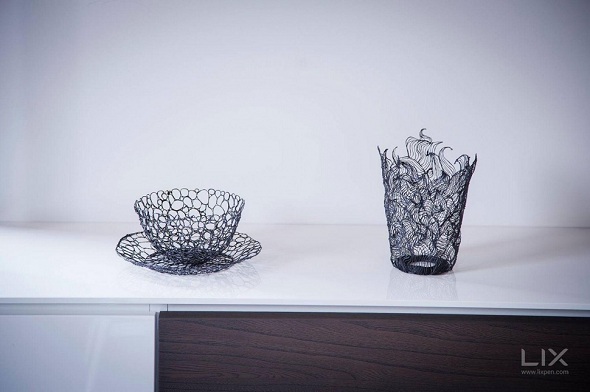 The pen sports two buttons which allow the designer to control the rate at which material should come out. The buttons further allow flexibility to the users by letting them determine the thickness of the melted plastic output.

Liz is speculated to have vast design and styling applications and has been highly anticipated in creative industry. And the list of anticipated professionals doesn’t end there. According to Delphine Eloise Wood, co-founder of Lix Pen Ltd, a lawyer said that she required such 3D printing pen during trials of Med-Mal cases in order to provide 3D images of various body parts lost due to carelessness.

Lix pen doesn’t require any kind of sheets of paper to draw upon making the sketch or model more expensive. It rather allows innovators and creators to provide a more realistic detailing to their sketches and models. Since USBs are portable and universal in use to everyone, the Lix team of creators decided to identify USBs as a common power source for the pen.

The pen had an affixed micro planetary gear motor, which is a very special innovative material with quite low thermal materials for the filament supply system. The mechanism is patented and was created in order to blend perfectly into a 12-millimetre diameter tube. Later, pen given a slick designed to appeal user experience and enhance aesthetic value.

Currently the pen is a prototype, but is estimated to hit mass production within next few months and will be available at a price tag of $135.

Anna Domanska
Anna Domanska is an Industry Leaders Magazine author possessing wide-range of knowledge for Business News. She is an avid reader and writer of Business and CEO Magazines and a rigorous follower of Business Leaders.
« Amazon launches tech store dedicated to all things wearable
Tech firms to routinely notify users of secret data demands »
Leave a Comment
Close