“Living Concrete” has smaller carbon footprint than most building materials

The US Department of Defense’s research arm DARPA wants to scale up production of these L.B.Ms – also known as living building materials and pilot its use to aid construction in remote or austere environments.

Concrete is the most widely-used substance on the planet, after water. If concrete industry were a country, it would be the third largest CO2 emitter on Earth with up to 2.2 billion tonnes, next to China and the United States.

Across the world, this humble mixture of cement and sand has become synonymous with human progress. Concrete slabs provide a structure for transport, energy, healthcare, and education. To humans, nothing warms our skyline like tall concrete towers. But its widespread use also magnifies our woes. Concrete sucks up almost a 10th of the world’s industrial water us; it renders our soil infertile, choke rivers, and kill habitats.

If the current rate of concrete consumption isn’t reduced in the near-future, the global concrete industry will bulk up the global warming issue. It is indeed a formidable task that cannot be accomplished unless we find a new material that is less environmentally disastrous.

Researchers from the University of Colorado, Boulder, have created what they call ‘living concrete’ by using sand, gel and bacteria.

This building material is capable of self-healing and is more environmentally friendly than concrete. Researchers believe this breakthrough paves the way for future building structures that could “heal their own cracks, suck up dangerous toxins from the air or even glow on command.” 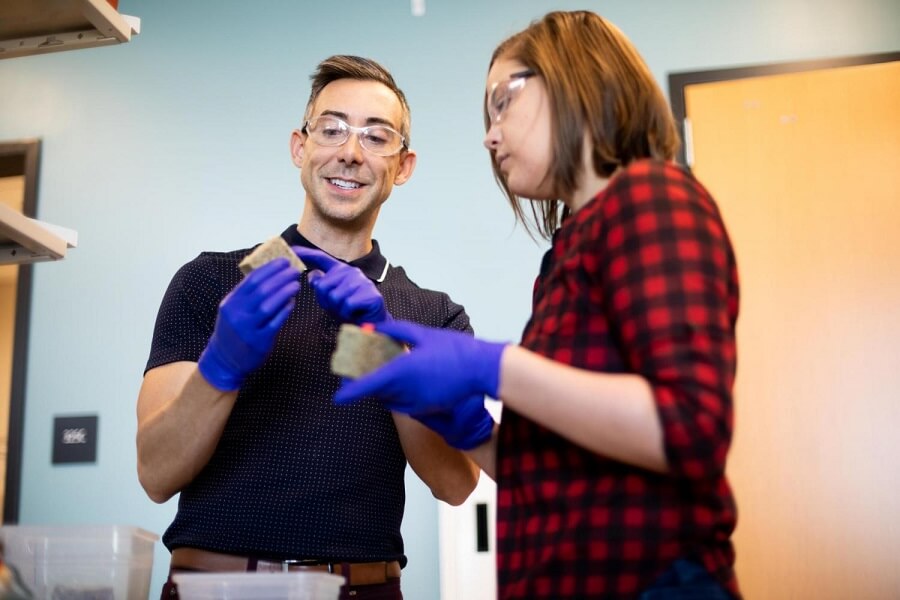 Biological materials like wood are already used, but they are dead, says Wil Srubar, who heads the Living Materials Laboratory at the University of Colorado Boulder.

To build the living concrete, the team worked with cyanobacteria – green microbes that live in water and can manufacture their own food. Powered by photosynthesis, cyanobacteria can absorb sunlight, nutrients, and carbon dioxide and create calcium carbonate or chitin, the compound most commonly found in seashells and concrete.

The team grew the cyanobacteria in artificial seawater and other nutrients, and heated to 30 degrees Celsius, then combined it with gelatin and sand. The liquid mixture was then placed in a mould, where it cooled, and solidified into hydrogel that supported bacterial growth. 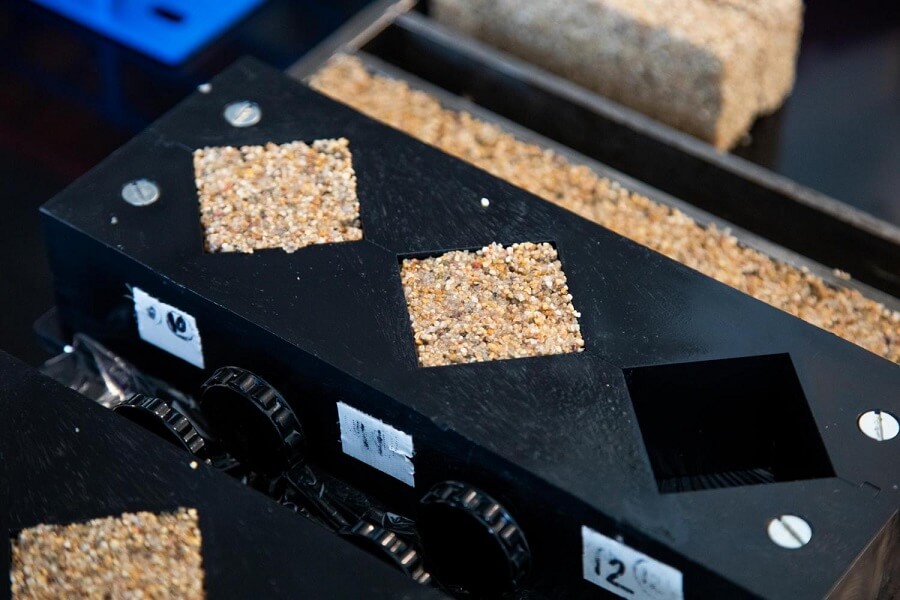 A mold for shaping bricks made out of living materials.

The Synechococcus in the cyanobacteria seeded calcium carbonate throughout the mixture, turning the solidified hydrogel into a toughened mineralized substance that held the sand in place.

These hydrogel bricks reach their maximum strength over the course of days, and the bacteria gradually begin to die out. Even after a few weeks, the blocks are still alive; when exposed to high temperature and humidity, many of the bacterial cells come back to life.

The living concrete is capable of reproducing itself. When split in half, the bacteria can grow into two complete hydrogel bricks with the help of some extra sand, hydrogel mix and nutrients.

The commercial use of living concrete in building construction could make the whole process more environmentally-friendly because of its reliance on photosynthesis. The concrete, if not dehydrated, would continue to grow thus healing on its own.

This concrete building process, however, is too slow to DARPA’s liking. The team is currently in talks with the US Department of Defense’s research arm and the project funder to scale up production of these L.B.Ms – also known as living building materials, and pilot its use to aid construction in remote or austere environments.

There are several stumbling blocks to overcome. The mechanical properties of living concrete are quite similar to mortar although, it isn’t yet as strong as regular bricks.

Eventually, the living building materials could be put to use to build mankind new concrete structures in environments harsher than even the Gobi deserts; perhaps, Mars.

Anna Domanska
Anna Domanska is an Industry Leaders Magazine author possessing wide-range of knowledge for Business News. She is an avid reader and writer of Business and CEO Magazines and a rigorous follower of Business Leaders.
« World’s Cheapest Electric Cars (2020)
World’s Most Valuable Private Companies (2020) »
Leave a Comment
Close