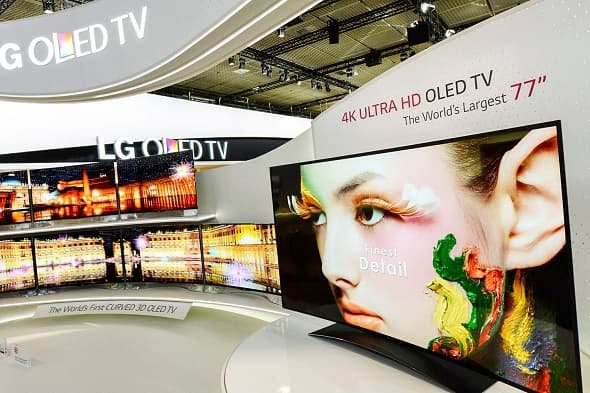 Using the exceptionally expensive OLED display technology, the company will launch two giant models, the LG 77EG9700 which comes with a 77 inch display, and the LG 65EC9700 which comes with a 65 inch display. Both of these new 4K OLED TVs come with a resolution of 3840 x 2160 pixels and both models come with a curved display composed of organic light-emitting diodes in Ultra HD quality. Beginning September, the company will ship 65-inch OLED TVs in South Korea, Europe and North America and the 77-inch model will hit shelves later this year.

Majority of the TV manufacturers are pushing to make Ultra HD TVs mainstream but they use LCD screens. LG 4K OLED TV uses an improved panel which features LG’s proprietary Four-Color Pixel WRGB technology that packs four times more pixels than regular HD televisions. With 33 million sub-pixels working to generate the most lifelike colors with richer, brighter and more natural hues which highlights the superiority of OLED over conventional display technology. The self-lighting pixels also ensures deeper blacks and its quick response rate helps the TV render motion flawlessly without wavering or blurring providing an amazing viewing experience to viewers. Simply put, it is the future of television.

The cost of making ultra HD quality TVs with OLED screens remain high. LG’s 65-inch model will be priced 12 million won ($11,765), while other kinds of ultra HD televisions sell for less than $3,000.

OLED features deeper colour saturation and razor-sharp picture quality than LCD. However, its price and high production error rate precluded the technology from catching on among mainstream consumers.

The South Korean company said it is committed to OLED because the price will reduce and eventually its advanced screen will replace LCD screens. LG predicts that OLED TV sales will outshine LCD TV sales within a few years.

“OLED is where we must head next after PDP and LCD. It is a matter of time,” Ha Hyun-hwoi, head of LG’s TV business said in a statement.

While LG’s aggressively pushing the OLED TV’s, its rival Samsung Electronics has not announced an upgrade to its 55-inch curved TV that uses an OLED display. Samsung uses OLED technology mostly for small devices, such as tablet, computers and smartphones.

Anna Domanska
Anna Domanska is an Industry Leaders Magazine author possessing wide-range of knowledge for Business News. She is an avid reader and writer of Business and CEO Magazines and a rigorous follower of Business Leaders.
« DMV Orders Google to Add Steering Wheel and Pedals for its Driverless Cars
NSA Built Own ‘Google-Like’ Search Engine To Share Communication Records With Government Agencies »
Leave a Comment
Close