LG on Monday announced its latest Friend, this time it’s an action camera designed to be the perfect companion for the smartphone. Called Action Cam LTE, the camera, which as the name suggests has LTE connectivity. The camera is meant to be a standalone device which can be used to capture images and video similar to the way GoPro is used. While the device can be connected to the likes of the LG G5, it can also be used on its own to record video and click pictures.

The camera is powered by a Qualcomm Snapdragon 650 processor and can stream directly to YouTube Live. Due to the hardware and the ability to connect to cell networks, the LG camera enables users to record video and stream it live over 3G and 4G connections to services, which is pretty good for an action camera. 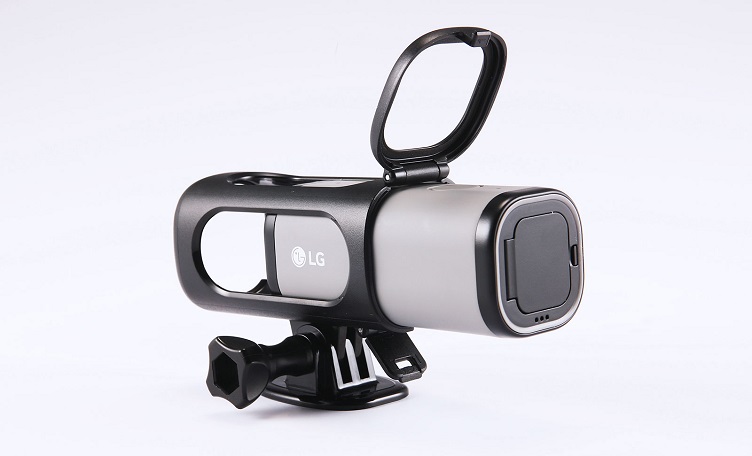 In terms of design, the LG camera takes on the barrel-type design, measuring around 35 x 35 x 79.7mm and weighing 99g. It comes offering IP67 rating making it water-resistant and capable of being immersed in up to one metre of water for up to 30 minute time period. The IP67 rating also makes it sand proof and dust proof, making it apt for an adventure that’s filled with action. It features a mounting cage, which seems to offer a standard GoPro attachment on the bottom, so will be easily compatible with a wide range of GoPro and third-party accessories.

The camera works with any device running on Android 5.0 Lollipop or newer, or iOS 9 and up device. Syncing a mobile device with the camera is done through the already available Action CAM LTE app. This enables users to store images or video straight to their phone or tablet, and control the camera remotely.

As for the tech specs, the camera is equipped with a 12.3MP sensor with a 150-degree wide angle lens and is capable of recording video in UHD (4K) at 30fps. It can also capture recording in Full HD at 30fps and 60fps as well as HD resolution at 30, 60, and 120 fps. There is live streaming over 3G and 4G networks at up to 720/30p and can be used as a CCTV camera for home monitoring, with pictures and videos going straight to the smartphone.

The Snapdragon 650 CPU comes paired with 2GB of RAM and 4GB of internal storage solely meant for its operating system. If users need to record video on the camera, they need to insert a microSD card of up to 2 TB.

Other specs include an accelerometer and gyroscope and Action Cam companion app on Google Play. The action camera has a 1400mAh battery which is good enough to provide up to 3 hours of Full HD footage.

The Action Cam LTE is available in Titan Silver and has been launched in South Korea. Other key markets are said to follow in the coming weeks. However, the exact price or release date is not yet revealed.

Anna Domanska
Anna Domanska is an Industry Leaders Magazine author possessing wide-range of knowledge for Business News. She is an avid reader and writer of Business and CEO Magazines and a rigorous follower of Business Leaders.
« ZTE ZMax Pro Promises Powerful Specs for Just $99
Corning Announces Gorilla Glass 5, Smartphones Can Survive Drops From Up to 1.6 Metres »
Leave a Comment
Close