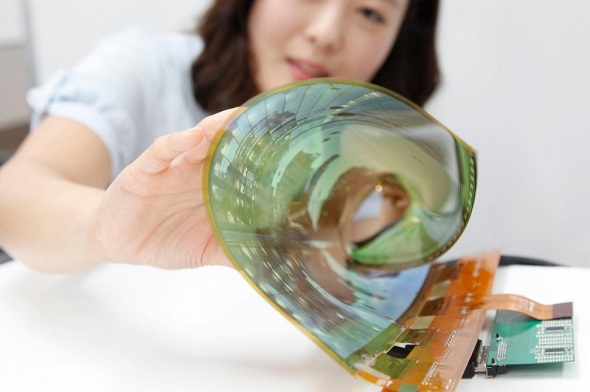 In-Byung Kang said in a statement that by 2017 the company will have successfully developed an Ultra HD OLED panel more than 60-inches in size, which will be flexible as well as transparent.

Korean manufacturer LG Electronics has created a TV screen so flexible that it can be rolled into a tube measuring just 3cm across. On Thursday the company demonstrated the world’s first rollable 18-inch flexible OLED panel as well as an 18-inch transparent OLED panel.

With TVs turning thinner these days, the new rollable factor will certainly make it more mobile and with these new panels, LG Display has already obtained fundamental technologies to precede the large-sized flexible and transparent display market.

The flexible OLED panel currently has a high-definition resolution of 1200×810, with nearly 1 million megapixels. The panel’s curvature radius is 30R, means the panel can be rolled up to 3cm without harming the display function. With this new technology, LG Display can come out with rollable TVs of more than 50 inches to the market in the future. The flexible OLED panel which LG showcased in the past was 6 inches with the curvature radius falling short of 700R.

As for the transparent OLED TV prototype, it boasts 30 percent light transmittance, as opposed to existing 10% transmittance levels on transparent LCD TV screens. This was achieved by embracing the firm’s transparent pixel design technology. LG has successfully reduced the haze of the display which is generated by using film components and circuit devices to a level of 2%. Because it is OLED, LG’s working on developing TV models that can discharge more light than ever before. In a few years the OLED TV could emit enough light to allow its owners to keep the lights off while watching their favorite movie.

With LG Display as the principal R&D entity, the transparent flexible display technology development project has been led by the Korea Evaluation Institute of Industrial Technology, Ministry of Trade and the Industry and Energy. Around 36 public and private organizations have taken part in the project.

LG Display’s SVP and head of R&D, In-Byung Kang said in a statement that by 2017 the company will have successfully developed an Ultra HD OLED panel more than 60-inches in size, which will be flexible as well as transparent.

Anna Domanska
Anna Domanska is an Industry Leaders Magazine author possessing wide-range of knowledge for Business News. She is an avid reader and writer of Business and CEO Magazines and a rigorous follower of Business Leaders.
« Android Factory Reset Option Doesn’t Remove All Your Personal Data
‘Lindt: Acquired a taste for Russell Stover candies’ »
Leave a Comment
Close

After the deal is finalized, VMware shareholders will elect to receive either $142.50 in cash or 0.252 Broadcom stock for each VMware share. Under the deal, Broadcom will also take
11 hours ago

Sweeney adds, “The problem here is a classic monopoly tie. You start with hardware. Apple makes smartphones and they profit from their smartphones — and they deserve to. But th
15 hours ago

The New York Post reported that the Bolt layoff will see restructuring across US, Canada and Europe. They expect that roughly one-third of the entire workforce will be impacted by
15 hours ago