LG Electronics has recently announced its first ever Smart Lamp, a household light bulb that is connectable to iOS and Android devices, which means is that an individual can control many aspects and features of this Wi-Fi or Bluetooth-powered Smart LED bulb via an app through the smartphone. 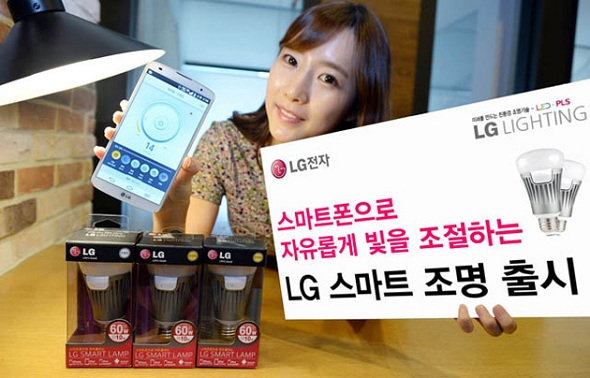 LG Electronics has recently announced its first ever Smart Lamp, a household light bulb that is connectable to iOS and Android devices

The low-wattage bulb is said to be 80% more energy efficient than the typical incandescent bulbs.

This is because the innovative light fixture uses LED technology which allows it to provide more Lumens at low power requirements. The Smart Bulb will blink when users get a phone call and this comes in handy when the phone is placed inside a bag where it is out of sight. The Smart Bulb is expected to last for over a decade with five hours of usage every day.

It also features several modes preset like Security Mode and Play Mode. The Security Mode lets users to switch on and off the bulb at a specified time even while they are away from the house. While in the Play mode the lights brightness and blinking are automatically adjusted to the beat of the music being played. For instance, if the music is blithesome and peppy, then the bulb will flash at a swift rate recreating a party like ambiance with blinking lights and all. Unfortunately, the Play Mode preset is only available for Android devices as of the moment. Folks with iOS will have to wait a bit longer. Users will need to download the companion app on their device that allows them to control various aspects of the bulb such as dimming or turning it on and off.

LG is said to be competing head to head with Philips in the light fixture business.  Philips introduced its ‘Hue’ light-bulb in October 2012 that could control up to 50 light bulbs via a smartphone app. The light bulb could connect to broadband networks and then allow smartphone users to alter the colour and brightness with an app sitting anywhere in the world. However, Hue required a ZigBee base station, rather than connecting directly to a phone via Bluetooth. The bulbs were exclusive to Apple Stores.

The Smart Bulb is currently priced at 35,000 won (around $32, £19, AU$33) and is compatible with Android 4.3+ and Apple iOS 6.0+. The Smart Bulb will only be available in South Korea. The electronics manufacturer has not made any announcement regarding the availability of the bulb in the international market.