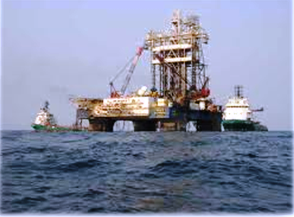 Since 20 years, Yigal Landau, the co-director of Ratio Oil Exploration has been drilling oil and gas in Israel mostly unsuccessfully. He oversaw more than a dozen explorations in the Mediterranean sea. The Middle east is known to contain world’s richest oil and gas reserves; however, Israel has consistently been suffering from a dry spell. Everything changed in late 2006 when Landau’s company obtained the license to explore the Leviathan, a deep sea field situated 130 kms from Israel’s coastline in the Mediterranean. In December, 2010 Ratio Oil Exploration along with their majority holder Noble Energy, Houston and 2 others startled the world and pleasantly surprised Israel with the announcement that the field contains 450 cubic meters of natural gas. This Discovery made it the world’s largest offshore gas find of the past decade. An ecstatic Landau reportedly said, “We had been expecting good news, but hearing the actual results, understanding the findings, made us very, very happy.”

The companies involved are happier than the entire Israel combined as they have already got themselves a ginormous amount of money. For the companies involved, the breakthrough has already translated into huge wealth. Ratio’s market value went up from $1 million four years ago to $1 billion yesterday. Surprisingly, it owns the tiniest part of the share. Israel has a lot more to enjoy with the new tax revenues and royalties that would flow in the treasury. They seem to be thinking about exporting a portion of this natural gas, although, it seems unlikely that they will go ahead considering plenty of other discoveries in natural gas have already established a firm hold in the market.

In addition to that, Lebanon claims that Israel has violated their maritime rights and is all geared up boosting its defense systems and if needed, negotiation skills. Brenda Shaffer, an energy expert at Haifa University believes that even though Leviathan is greatly important for Israel, it does accompany a lot of dangers with it.

The discoveries are highly controversial owing to Israel’s unfair conditions on the Gaza Marine field in Palestine’s waters, and its demands that the gas should first be routed to Ashkelon and then to Gaza so that Israel can deduct the fuel it requires at the prices it wants and control the flow further to assert its political agenda. Due to this, British Gas and its partners the Greek Consolidated Contractors Company with the Investment fund of the Palestinian Authority have suspended further explorations.

On the other hand, Lebanon claims that nearly 33 percent of Leviathan falls under their territory. Lebanese FM, Ali Shami urged UN Secretary Ban Ki-moon to prevent Israel from exploiting Lebanon’s maritime wealth, but UN spokesman says it won’t demarcate border.  Sayyed Hassan Nasrallah, Hizbullah chief has already declared, “We are able to target any vessels heading for any port on the Palestinian [Israeli] shore, from north to the farthest point south.”  Responding to the hate speech Israel announced that they would use any force needed to protect their ships.

The dispute is mostly a demarcation issue. After Israel’s withdrawal from Lebanon in 2000, the  “blue line” came into being –  the de facto land border sanctioned by the UN between Israel and Lebanon. The problem arose when Israel unilaterally extended a line of buoys into the sea to approximate a maritime border, which allegedly gives them more territorial water than they deserve. Lebanese officials have submitted maps to the U.N. to mediate the dispute.  The Tamar field is 35 miles south of Lebanese waters, while two other small blocks are reported to be extending into these waters whereas certain maps of some of the fields in the Southern waters are known to indicate that they might even extend into Palestinian waters.

Israel dismisses Lebanese allegations saying that even after an adjustment the Leviathan field would still be within Israel’s territory. Many geologists believe that a broad natural-gas reef does extend far north to Israel’s shore leaving Lebanon enough to exploit. This dispute can only be solved by negotiations, but it seems highly unlikely that Arab countries and Israel would co-operate and co-exist without wanting to kill each other at the first instance.

Israel has constantly been working to be energy-independent since it has been facing the Arab boycott since forever. Their energy supply is completely dependent on imports. The ’60s and ‘70s saw good oil flow from Iran until the Iranian Shah was bid a not so happy farewell by everyone except Israel. Even the Sinai desert was not let alone until it was handed over to Egypt in ’79 after a Peace Treaty. Israel has hardly had diplomatic ties with most countries it imports oil from, no wonder, as its former minister of national infrastructure, Josephy Paritzky had admitted during his term.

Everyone who should know knew that Israel would find the energy supply far out in the Mediterranean; however, International companies were afraid of the Indigestion Arab countries would cause at this news. With Texas based Noble Energy emerging on the scene a good enough reserve at Tamar was discovered with the drilling beginning at Leviathan.

With these combined Israel would be self sufficient for at least half a century leaving the exports aside. The problem here is the extraction and transportation which incurs a lot of expenditure. Noble CEO Charles Davidson told the Houston Chronicle that the Israeli government was showing flexibility in negotiations over the rates, especially for previously discovered fields. He was also looking out for partners interested in building the infrastructure that would make marketing the natural gas a lot more profitable; however, it would take billions and a lot of years. The profitability of this venture is still under scrutiny as the prices of Gas have gone down considerably after several other similar discoveries in the rest of the world.

The other option is to build an underwater pipeline; however, Cyprus being right beside Leviathan and not a big buyer is in no mood to help with that. Egypt on the other end of the pipeline already has its store. Israel is still hopeful as they are looking to sell the gas to certain European countries and former Soviets, but that would again be not so profitable unless at least one of their potential clients commits to paying for decades to come.

There seems to be a lot more at stake for Israel than just natural gas. Making peace with Palestine and Lebanon does not fall into its list of priorities at least for now. Moreover, UN is is no mood to meddle of course because no one seems to be listening to it any more. The billion dollars potential contracts need Israel to make friends with its neighbors and come to peace with its past for the larger world to enjoy fuel at reasonable prices.