“We’re all in. The only question is, will the customer be there with us?” asks Ford Motor Executive Chairman Bill Ford Jr.

Electric vehicle makers, as a whole, are worth more than traditional automakers – by about $100 billion. It’s a remarkable achievement for an industry that, measured by auto sales, is considerably small. The year-end EV stocks rally is a testament to the ineptitude of rivals to catch up in the expanding electric-vehicles market. According to Morgan Stanley, Tesla stocks will rally through 2021 boosted by forecasts of 5.2 million vehicle deliveries by 2030 from 3.8 million. Traditional auto industry leaders are now moving further away from gasoline-chugging vehicles in a bid to tap on the positive electric vehicle market outlook with EV investments in billions. 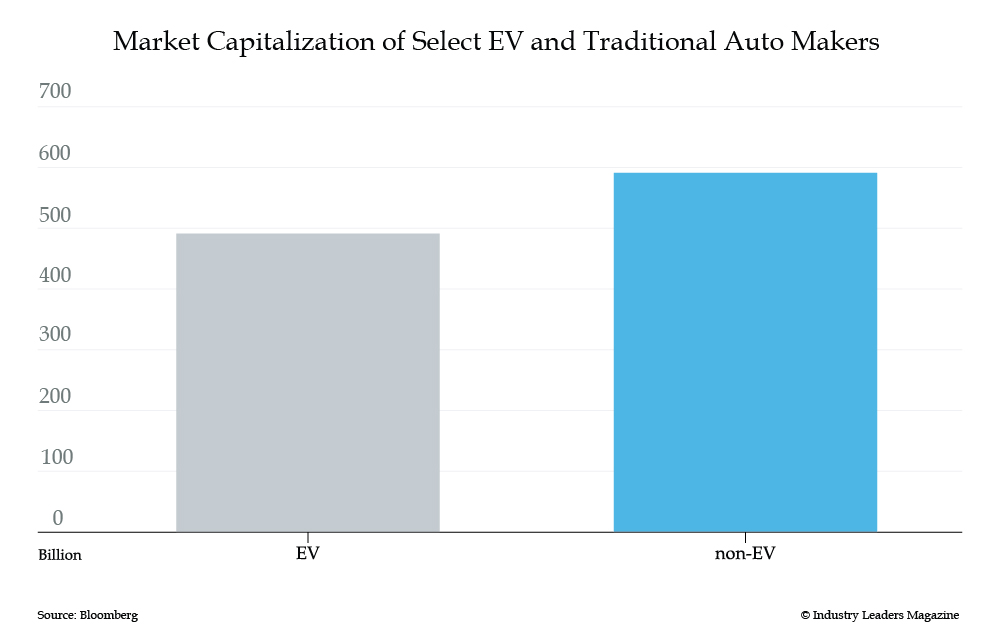 Industry Leaders Magazine’s list of traditional automakers across the globe includes: BMW, Fiat Chrysler Automobiles, Ford Motor, General Motors, Honda Motor, Kia Motor, Peugeot, Nissan, and Volkswagen. Some may argue that EV investments aren’t happening as quickly as predicted, but the pace and scale at which these companies are pledging money says otherwise. 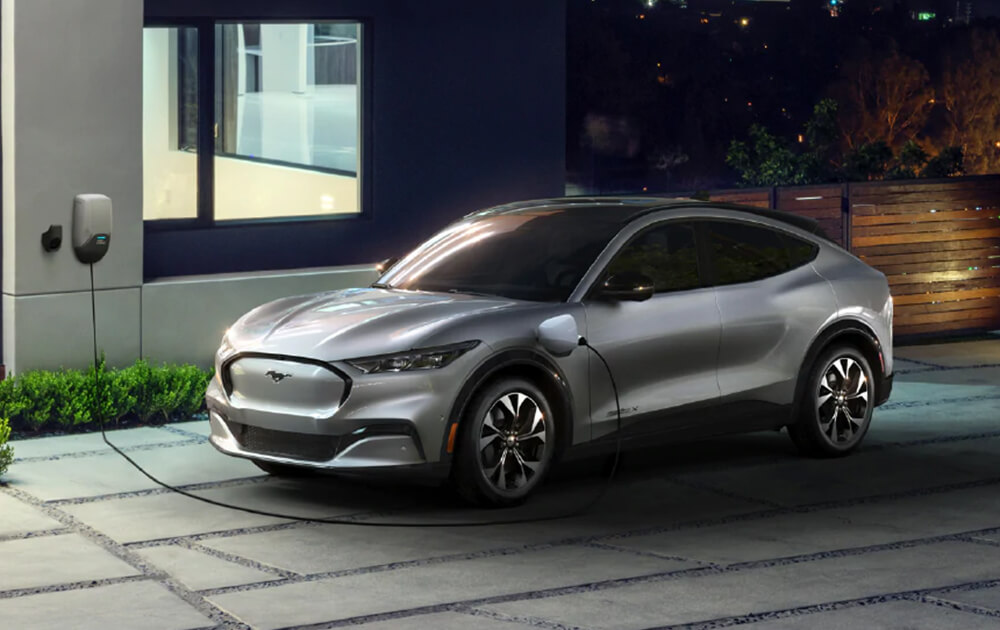 Ford Motor Co. recently announced it plans to double autonomous, electric vehicles investment to $29 billion, even as it posted a fourth-quarter net loss of $2.8 billion. The No. 2 U.S. automaker said it is “doubling down” on connected electric vehicles and plans to invest $22 billion in electrification through 2025. The amount is nearly twice what it had previously committed to electric vehicles. Additionally, Ford would invest $7 billion in autonomous technology development over a period of 10 years through 2025 – nearly double of $5 billion from 2021 forward.

“If EVs continue to quickly gain favor, especially with commercial customers, we want to be clear that we will not cede ground to anyone,” Chief Financial Officer John Lawler told reporters on a conference call.

The legacy automaker is keen to increase its battery capacity and add more electric vehicles in its future portfolio. “We are accelerating all our plans,” said Ford chief executive Jim Farley on the conference call with analysts.

The $22 billion EV investment does not include potential investment in battery production. Ford will make more announcements soon around its EV partnerships. 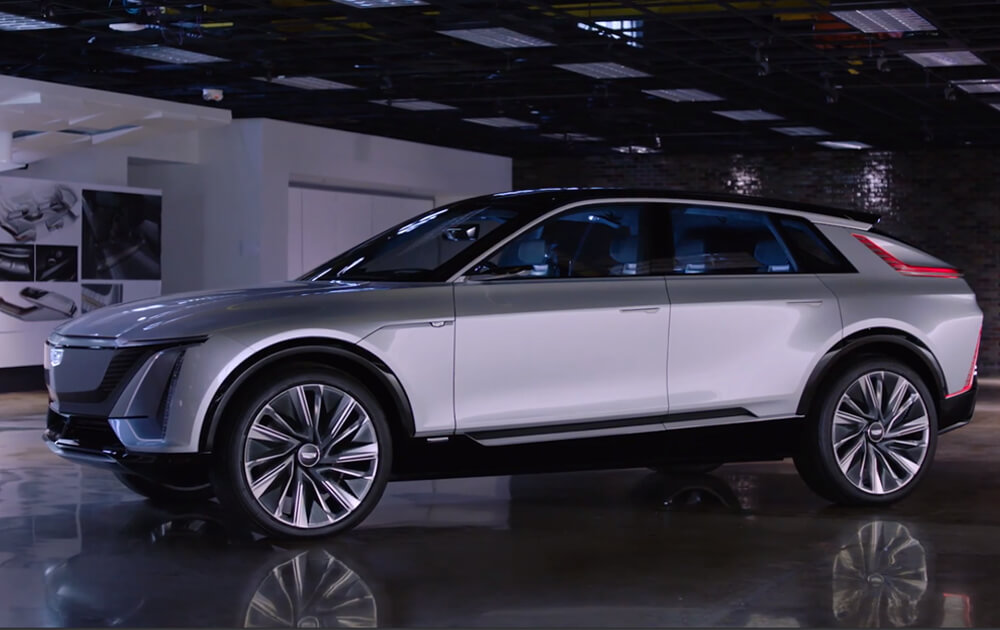 In November of last year, General Motors announced it plans to spend $27 billion in EV and AV through mid-decade. The electric, autonomous investment boost follows an unveiling of the all-electric Hummer truck along with a series of announcements on building new electric auto manufacturing capacity, including the overhaul of older assembly plants.

“Climate change is real, and we want to be part of the solution by putting everyone in an electric vehicle,” said GM Chief Executive Mary Barra. “We are transitioning to an all-electric portfolio from a position of strength and we’re focused on growth.”

The company recently announced it will stop producing gas-powered vehicles by 2035 and be completely carbon neutral by 2040.

“GM’s EV development times are speeding up and costs are going down rapidly, so we expect our Ultium EV programs to be profitable from the first generation on,” said GM executive vice president Doug Parks.

The automaker has outlined plans to introduce 20 new battery and fuel cell electric vehicles by 2030. Most of them will be built on a modular platform that is to be introduced by the end of 2021.

The German automaker, which owns brands including Audi, Porsche, Seat, Skoda and Volkswagen, has earmarked $86 million over the next five years as it seeks to retain its crown as the world’s largest carmaker in the green era.

“The transformation of the company and its brands as well as the strategic focus on the core mobility areas will be consistently implemented,” Volkswagen’s supervisory board Chairman Hans Dieter Poetsch said.

Volkswagen Group’s transformation could be accelerated by the European Union’s emissions clampdown which seeks to have at least 30 million electric vehicles by 2030. The automaker plans to build electrified versions of its 300+ global models by 2030.

Daimler, Mercedes-Benz’s parent company, will spend more than $85 billion “to accelerate the transformation towards electrification and digitization.” The automaker has already made progress with electric trucks, like the eCascadia, an electric class 8 semi truck, and the eActros, a short-range urban electric truck.

Daimler will spend the money on R&D and in property plant and equipment. Like its contemporaries, Daimler has set its sight on becoming an industry leader of EVs, and closing the gap to Tesla which currently has an iron grip on the EV market.

“It’s going to be a pretty long runway”

The growth of the EV market largely depends on electric-auto charging infrastructure in the coming years. According to federal data, there are currently 28,165 EV charging stations in the United States compared with 168,000 gas stations. As any industry analyst will tell you, it isn’t just about EV investments – it’s about years of planning ahead, development and testing an electric, autonomous vehicle before it’s market-ready.

Accomplished comedienne and writer Tina Fey has described the imposter phenomenon as oscillating between extreme self-doubt and egomania.
7 hours ago