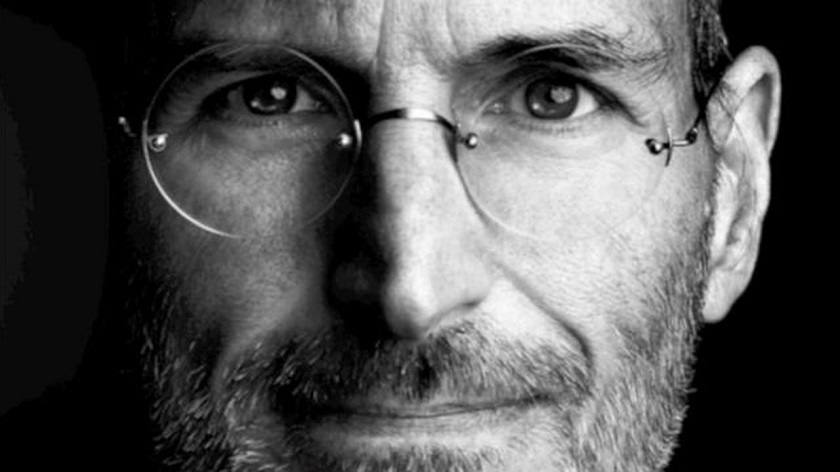 Jobs, throughout his life, shared more memorable management lessons than any mogul and megalomaniac through the ages. One of the uncanny traits of the Apple co-founder was his stubborn hubris. The man knew how to negotiate, how hard to negotiate, and how to turn any condition into a winning stride. A few good books, like The Steve Jobs Way by Jay Elliot and William Simon, give the reader the opportunity to learn about the mystique of his innovative management style.

Steve Jobs has been a popular figure in business for his management style and the art of negotiation. Let’s go back in time, see what an excellent negotiator Steve Jobs was, and learn how to negotiate like a hard-bitten businessman.

Eddy Cue, then Apple’s head of iTunes and the App Store, visited the honchos of HarperCollins and its parent company, News Corp. Meeting minutes was then sent in an email to Cue later that day by Brian Murray, the CEO of HarperCollins. The email went into detail about the publisher’s opening bid in negotiation, with only five days before the launch of the iPad. 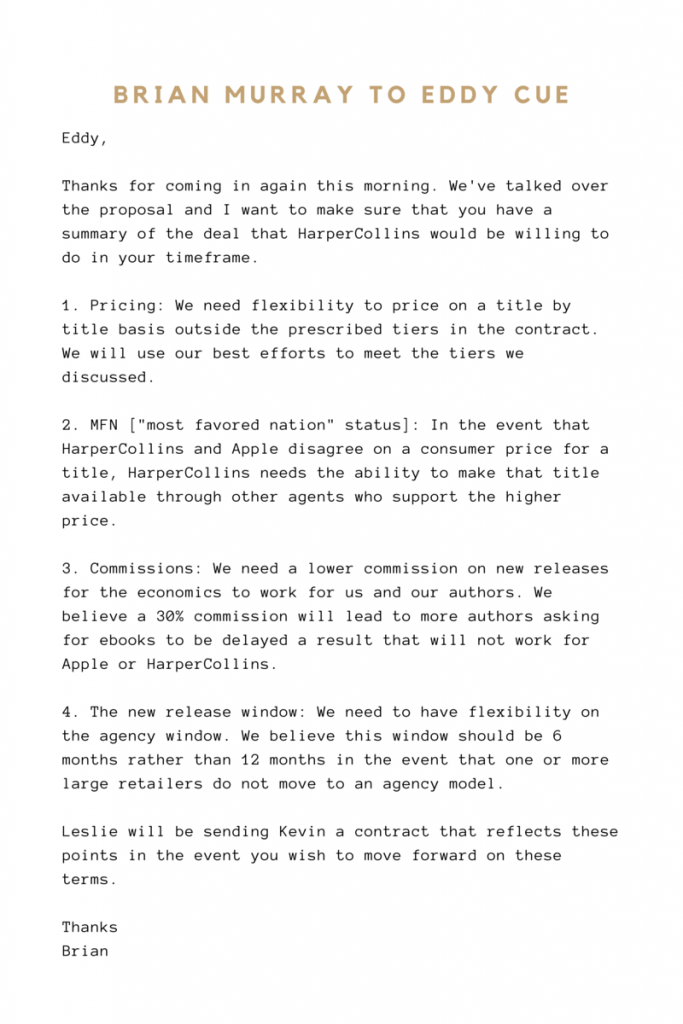 Apple was never going to agree to those terms. By now, the tech company had successfully signed deals with HarperCollin’s rivals including Penguin and Simon & Schuster. Those deals alone would allow Apple to set prices for new eBooks at $12.99 – much higher than the typical rate at that time on Amazon – and take a 30% cut of each sale.

Nonetheless, HarperCollins wanted to set its own prices and antsy that $12.99 per eBook would plummet its sales on the iPad and the Kindle. Also, it didn’t want to lose 30% cut of each sale. James Murdoch, News Corp. executive, forwarded Murray’s email to Apple’s then-CEO Steve Jobs, including the following note. 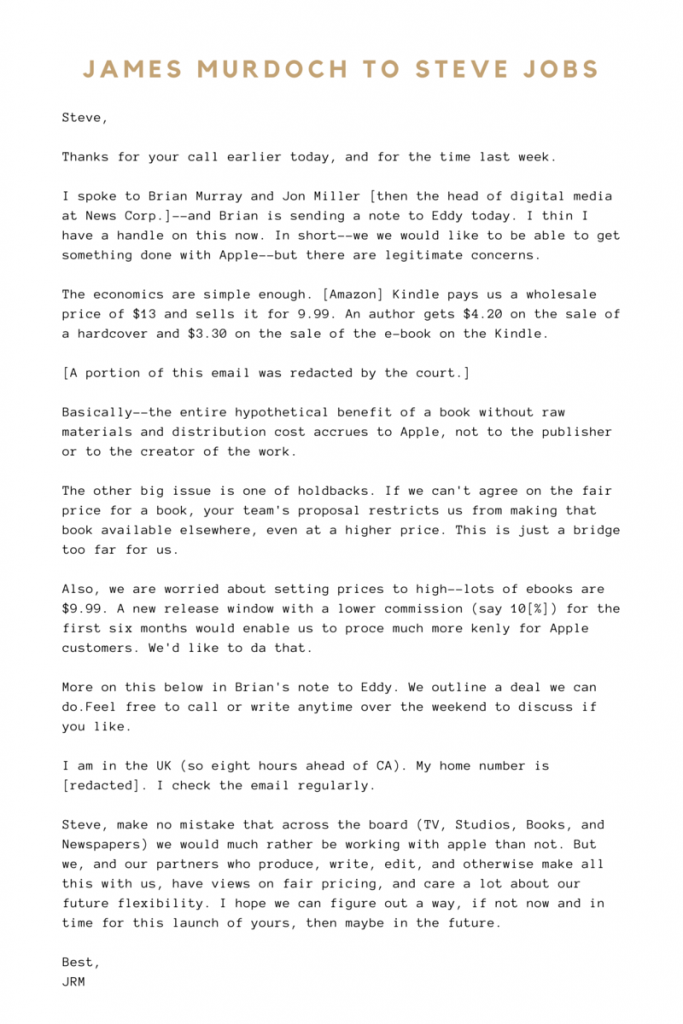 Jobs was a busy man, but he knew some deals are critical. He immediately sent this reply to Murdoch the same day, highlighting why Amazon’s pricing wasn’t sustainable and would train people to think that eBook were inexpensive. One thing, he made it clear in the email was that, Apple wouldn’t budge. 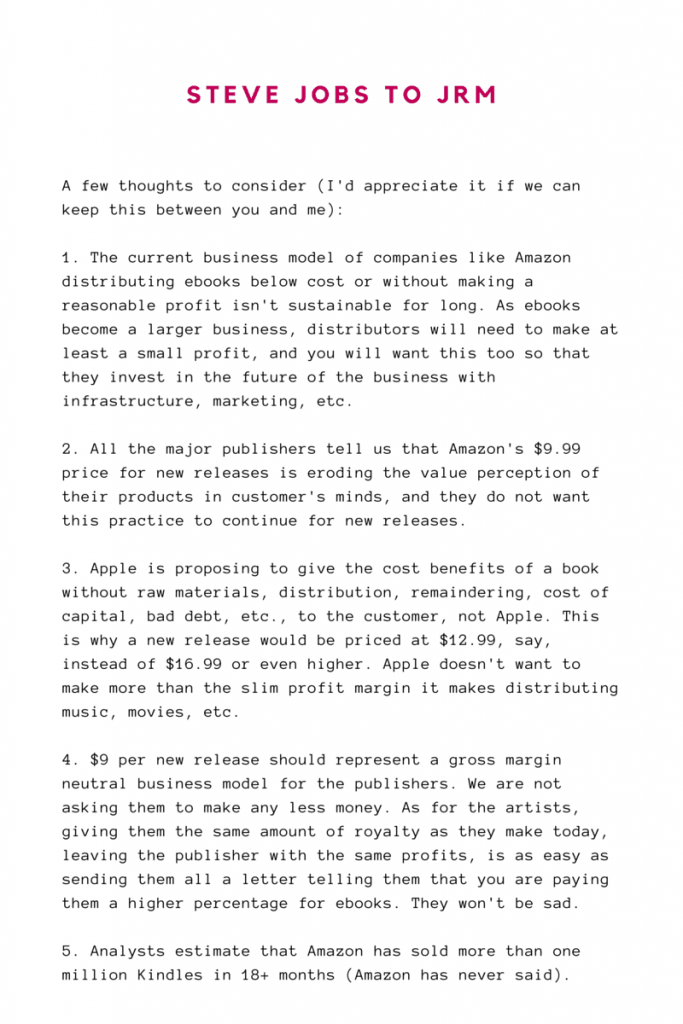 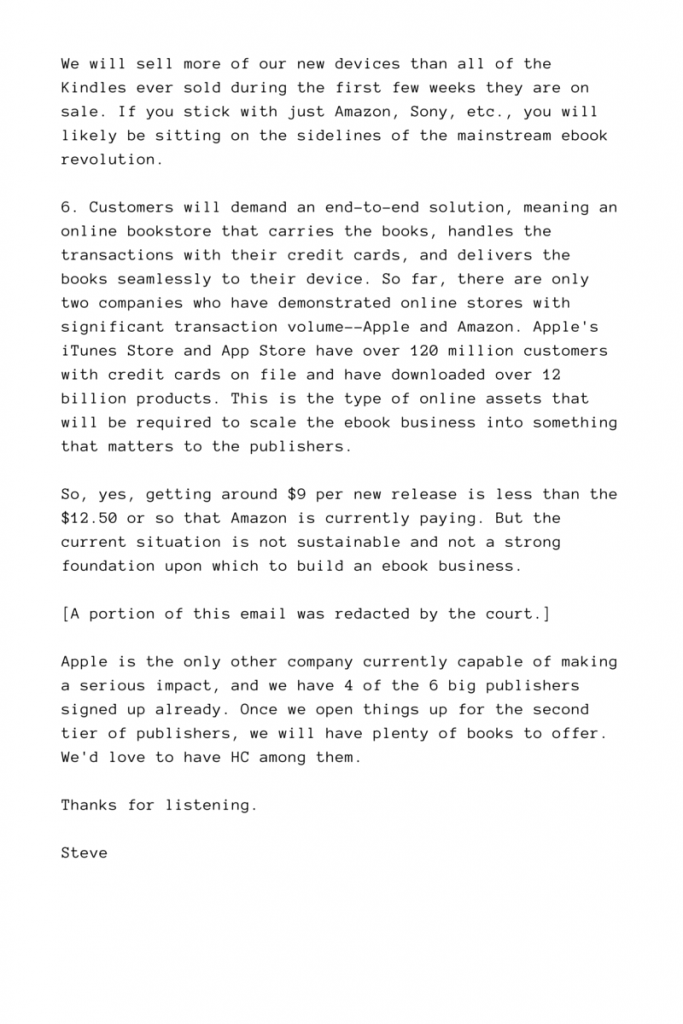 Murdoch’s reply came the following afternoon. He proposed a middle ground, the noted that Apple and News Corp. were negotiating on a number of fronts. The iPad announced was a few days away. 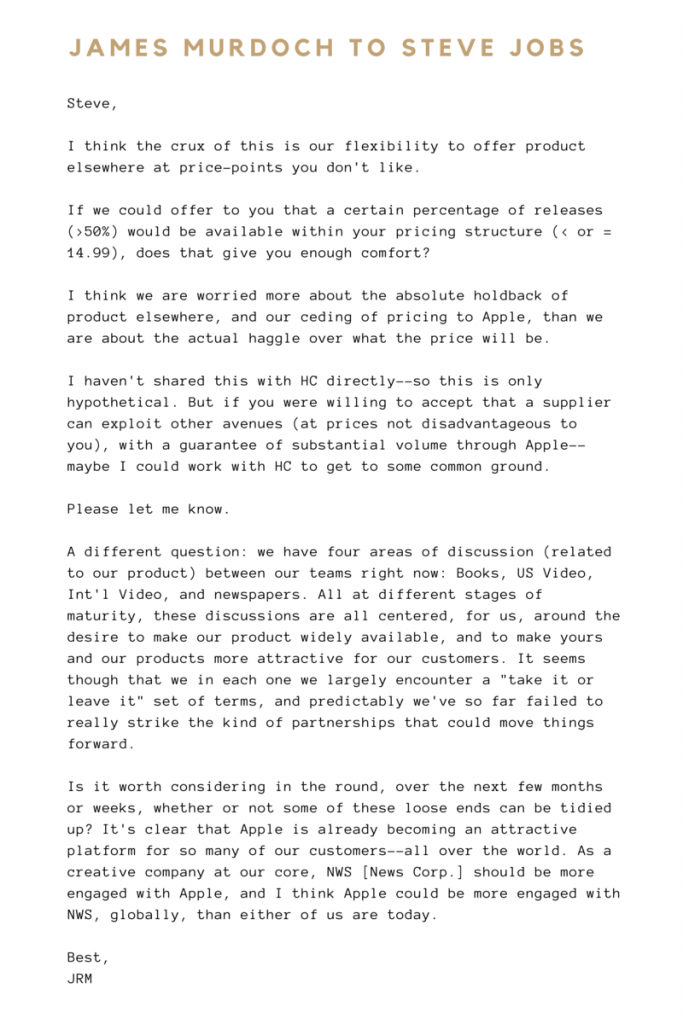 Now, with Murdoch putting it on record that HarperCollins was willing to trader-off, Jobs pressed harder. He outlined three clear-cut choices. HapperCollins was to either accept Apple’s terms, or, “Maybe I’m missing something, but I don’t see any other alternatives,” Jobs wrote, “Do you?” 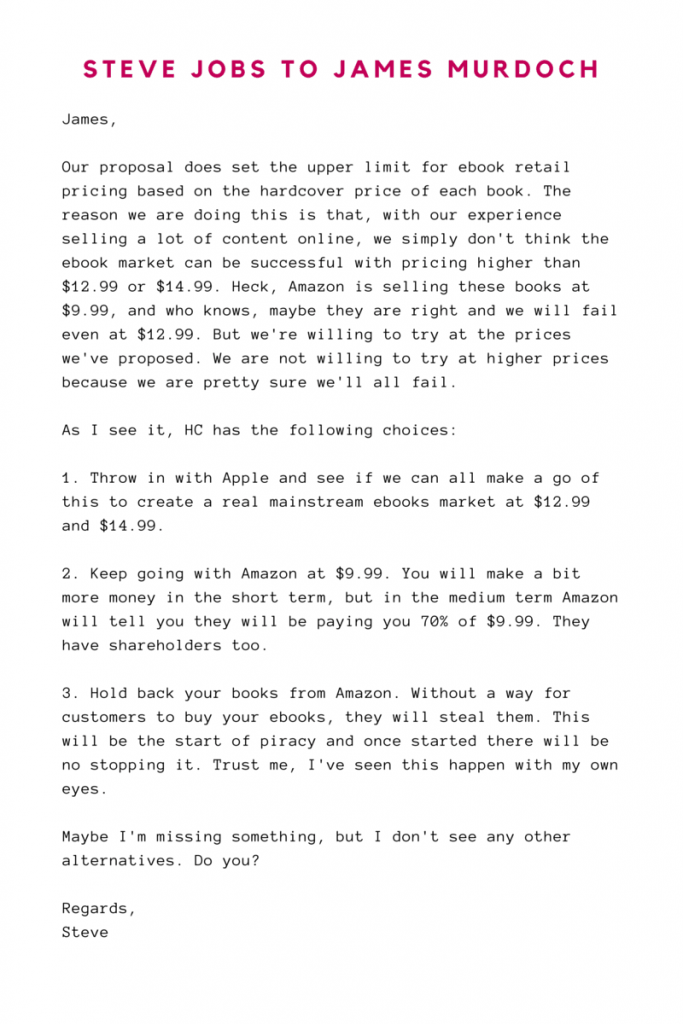 A day before the iPad launch, HarperCollins agreed to Apple’s terms of the deal.

To some, Steve Jobs was a tyrant, to others, an outlier. Jobs made sure there was a lot of iterative communication, so he could find out what the other person truly wants. One of the biggest mistakes people make during negotiation is trying to make the whole process rational and logical. The art of negotiation is all about an emotional play – where the other party makes a decision because of fear, greed, ego, a need to please, and so on. You don’t need any tactics, either persuasion or negotiation. Your strength lies in the sentence formation that you use with people, depending on the need and the situation. Notice how Jobs mentioned the 120 million customer credit card numbers? He deliberately left the image of potential profits in Murdoch’s mind.

To quote Steve Jobs: “Do you want to spend the rest of your life selling sugared water? Or do you want to come with me and change the world?”

Like our latest post on the art of negotiation? Read more on the management style of the man who was legendarily a tough nut to crack.

Anna Domanska
Anna Domanska is an Industry Leaders Magazine author possessing wide-range of knowledge for Business News. She is an avid reader and writer of Business and CEO Magazines and a rigorous follower of Business Leaders.
« Apple Releases Carekit Platform with Four Health Apps
Dear Google, Show Yourself Out of My House: Microsoft Cortana »
Leave a Comment
Close