Larger than Life: Antilla Mumbai – The World’s MOST Expensive Home 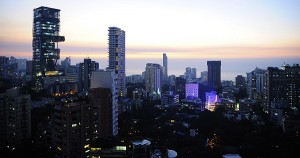 Given its location in the most expensive part of the Maximum City with over 13 million people, the new Ambani home Antilla Mumbai, named so after a mythical island, could very well be an island, oblivious of the massively dense city surrounding it, what with the three helipads on the roof, a 50-seat movie theatre, swimming pools (yes, in the plural!), a ballroom, a six-floor parking garage, and a four-story hanging garden.

The first house EVER to exceed $1 billion, Antilla Mumbai’s almost 400,000 square feet of interior space even exceeds that of the Palace of Versailles! Now, could the apt-ness of naming this edifice after an exotic island be questioned? We don’t think so. Especially given that the building houses a service staff of 600, (in addition of course to the 6 people of the Mukesh Ambani family).

And if this doesn’t astound you already, get this: each family member of the Mukesh Ambani family will have their own personal health club with a gym in Antilla Mumbai. Also, the mansion houses a dance studio, guest rooms, a variety of lounges, a six-level garage for 168 cars, a panic room and a garden on each level.

When you’ve got it, why wouldn’t you want to flaunt it? Not unlike other very successful industrial magnates around the world, the Ambanis wanted to build a custom home. So they brought in the designers of the Mandarin Oriental, architecture firms Perkins + Will and Hirsch Bedner Associates, based in Dallas and Los Angeles, respectively, since it was the Asian interiors of the Mandarin Oriental , that left Nita Ambani, Mukesh’s wife, absolutely awe-struck, not to mention, thoroughly inspired to have her home exude a similar feel.

According to Thomas Johnson, director of marketing at Hirsch Bedner Associates, the estimated cost of the world’s largest and most expensive home – the 27-story skyscraper in downtown Mumbai – when the plans were drawn up was almost $2 billion. The only remotely comparable high-rise property currently on the market is the $70 million triplex penthouse at the Pierre Hotel in New York, designed to resemble a French chateau, and climbing 525 feet in the air.

Why does this home cost more than a hotel or high-rise of similar size? It’s because of its custom measurements and fittings. A hotel or condominium has a common layout, replicated on every floor, and uses the same materials throughout the building (such as door handles, floors, lamps and window treatments). The signature aspect of Antilla Mumbai on the other hand is that no two floors are alike in terms of either plans organization or materials used. The lady of the house, Nita Ambani, had this vision of every space being unique, and the idea of blending styles and architectural elements so spaces give the feel of consistency, but without repetition formed a crucial part of the designers’ brief. So for example, if a metal, wood or crystal is part of the ninth-floor design, it shouldn’t be used on the eleventh floor.

If at this point you’re thinking “this is taking customization to a whole new level – literally!”, you’re spot on!

The completely glass-mirrored sky-scraper with a literally green façade has become one of the icons of Mumbai’s skyline. Every aspect of Antilla Mumbai, from its location to its bathroom jets, spills luxury.

Antilla has been built on a 4,532 square metres (48,780 sq ft) plot at Altamount Road on the very famous Cumballa Hill in South Mumbai, where land prices are upward of US$10,000 per square meter. Compare this to the approximate $12,000 per square metre price of property in New York – would it be possible to imagine a residential building spread over 400,000 square feet? Very definitely not.

Although Mumbai is the densest city in the world, with almost 30,000 people per square kilometer, this 500+ foot tall building will only be 27 floors where normally a building of this height would be 60, so that each floor can have exceptionally high ceilings. Also, the 400,000 sq ft space of Antilla – a house that belongs to a family of 6 people – is equivalent to each of the family members having more than 65,000 sq ft to him/herself, almost a 1000 times the 50-60 sq ft space that an average person in Mumbai lives on.

At a conceptual level, Antilla Mumbai’s layout is based on the principles of Vaastushastra, an Indian tradition much like Feng Shui that is said to move energy beneficially through the building by strategically placing materials, rooms and objects.

Atop the six stories of parking lots, Antilla’s living quarters begin with a lobby with nine elevators, as well as several storage rooms and lounges. Down dual stairways with silver-covered railings is a large ballroom with 80% of its ceiling covered in crystal chandeliers. It features a retractable showcase for pieces of art, a mount of LCD monitors and embedded speakers, as well as stages for entertainment. The hall opens to an indoor/outdoor bar, green rooms, powder rooms and allows access to a nearby “entourage room” for security guards and assistants to relax.

While the family and guests are able to relax and unwind in the four-storey garden on more temperate days, the humble abode also features an ice room where residents and guests can escape the Mumbai heat to a small, cooled chamber dusted by man-made snow flurries. Cool? Fantabulously so.

While Antilla has been subject to a number of controversies regarding the appropriateness of spending AND showing off such wealth in a context that is ridden with many social issues (like Mumbai being home to some of Asia’s worst slums for example), what is often forgotten is that almost 90% of the materials and labour that have gone into constructing this edifice have been sourced from India. How much employment would that have generated? Not an insignificant number to be sure.

The Ambani family plans to occasionally use the residence for corporate entertainment, and the family wants the look and feel of the home’s interior to be distinctly Indian. And wherever possible, the Ambanis used Indian companies, contractors, craftsmen and materials firms, whether it was for the silver railings, crystal chandeliers, woven area rugs or steel support beams.

So is there an environmental sustainability angle to this opulence? Sure. The gardens, whether hanging hydroponic plants, or fixed trees, are a critical part of the building’s exterior adornment but also serve a purpose: The plants act as an energy-saving device by absorbing sunlight, thus deflecting it from the living spaces and making it easier to keep the interior cool in summer and warm in winter.