Larger Than Life: The Most Expensive Photograph

In November 2011, a certain photograph became the subject of endless discussions on photography salons, internet threads, soirées, print and social media characterized by snide or polite disagreements, biting criticism and random conspiracies, habitually camouflaged as intellectual arguments in and outside the world of art. It was the world’s most expensive photograph, after all.

Topping the spot of most expensive photograph list Rhein II by Andreas Gursky has been talked about ever since it’s Auction at Christie’s New York. A 6×11 foot gigantic physical print, the photograph sold for a groundbreaking $4.3 Million, not even six months after the last photography record was set for Cindy Sherman’s Untitled #96 in May for $3.8 Million at the same venue.

So, while we have the alternative of claiming the horrors of capitalism, we’ve decided why not peek into the subject a little more to dig out what makes it so expensive? Why not walk on the fragile balance between our power of imagination and Andreas Gursky’s perspective and savor the dawn coming age where a handful of photographers are rebranding themselves as artists. 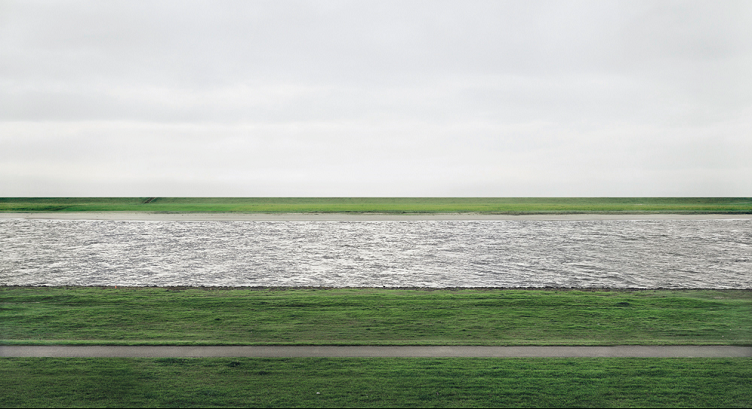 (The proportions make the photograph an extraordinary shot along with the magnificent contrast of colors. The Earth to sky ratio is 1:1, gray to green ratio is 2:1. Guesswork says the artist must have inserted bit of 1/6ths of grass.)

What makes it so expensive?

The aesthetically soothing and calm image is a breathtaking 6×11 print, captured in 1999 portraying the stretch of river Rhine outside Düsseldorf. The Rhein is a major river in Germany, frequently used by travelers all day long. It is also one of the busiest shipping routes of the world. A typical capture of the river would comprise of numerous boats, factories in the background, castles and vineyards on hilly terrains. Gursky’s body of work depicts the engulfing business prospect of modern life. The Rhein II is a quite a contrast in comparison to those others. In Andreas Gursky’s Rhein II photograph, the location and angle of the photo have been chosen in such a manner that the land is at the same height as the river, eliminating industrial backgrounds and other man-made artifacts. The photograph at Christie’s Auction was described as a ‘dramatic and profound reflection on human existence and our relationship to nature on the cusp of the 21st century’. Rhein II is minimalism at its supreme.

Multiple images were captured by the artist at the exact time of the day, scanning large format negatives. The images were then subjected to compositing and editing in Photoshop, something that was pretty early by digital editing standards. One of the most intriguing parts is that, even in the current digital age, most people find trouble adding the digital composite of such a higher resolution with tools such as Photoshop. To produce a print as large as 6×11 foot requires a tremendous amount of technical efforts, without showing loss of resolution.

Another factor making it expensive is its rarity. Out of the six editions produced, three of those are in public museums (MoMa, Tate, Pinakothek der Moderna, Munich). One is in a private museum (Glenstone, Potomac) and of the two left in private collection, one was sold at the overwhelming price, marking its rarity.

Gursky shot to fame in 1980’s, a time when photographs didn’t share as much space in the galleries as paintings did, pioneering photo-manipulation techniques. To accept photography as an art was then a brave and an alien concept. His work constantly adapted technical aspects depicting the high-art environment, collective existence and unitary behavior of large crowds, forcing its way into people’s power of imagination. Some deem the rich scale, attention to color and form of his photography as an intended challenge to the painting’s status as the crowned king of the art form.

The artist has always been eminent, breaking new grounds in the way film and digital processes have been used in making photographs. The presence of most of his works in full-size prints is something which cannot be experienced from a computer or a mobile screen. They indent to overwhelm us within their large confided expanses. Most of his images require extraordinary technical accomplishments. They take months and month to set up in advance as well as a lot of digital altering. A prime example of which, is Gursky’s New York Stock Exchange in 1991, which shows his marvelous attention to detail and technical ability, condensing time and spatial events.

Another one of his artwork 99Cents, again a 6×11 ft print, created to illustrate the metaphor of modern consumerism and aggressive capitalism. Ironically, the photograph was sold in 2007 for 2.2 million. It currently stands as world’s fourth most expensive photograph. Valuation of art has always been higher than that of photographs. Gursky’s photo-manipulation and wide metaphors makes him much more of an artist than a photographer.

The Rhein II passed the previous record of Cindy Sherman’s Untitled #96 from 1981, which was sold for $3.89 Million. The photograph was sold at the auction by an anonymous owner. Since, visual artists do not get royalties like some performing artists do; it can be perceived that Gursky did not receive the $4.3 million.

Sherman’s Untitled #96, which previously held the record, is a photo of the artist herself dressed as an innocent retro teenage girl, with signs of mushrooming sexuality such as flushed cheeks, pink lipstick, a provocatively upturned hem of skirt and painted crimson nails looking distracted by dreams of unrequited love. Cindy Sherman was a pioneer in depicting identity crisis and feminism in the 80’s. But then, beauty lies in the eyes of the beholder. What we distinguish in the artwork might not be the same in someone else’s vision.

Investment in artwork is explorative. Artists whose work is well-represented in renowned museums tend to acclaim positive criticism and increasing their value over time, mostly due to their status as their masterpieces often stifle the opinion of curatives. While photography has always be standardized as a lower art form, due to its easier accessibility in to producing photographs by anybody holding a camera. Some photographers have been called artists, due to their extraordinary vision and technical mastery that sets from above the rest.