Kraft Foods, America’s largest F&B company, has made a big splash in the billion-dollar water flavouring business, with its upcoming launch of a zero-kilojoule flavour enhancer in the US.

MiO (“mine,” in Italian), a zero-calorie, concentrated line of liquid flavorings – from Berry Pomegranate to Strawberry Watermelon – presented in sleek bottles that look like palm-sized water droplets, are all set to redefine the world’s fizzy preferences .

Mio, Kraft’s first rollout in the new food or beverage category in more than 15 years, is being posed to rank among Kraft’s biggest-ever product rollouts,  the last one bwing DiGiorno rising-crust pizza in 1995.

“This is the next big thing,” says Roxanne Bernstein, director of the $3.99 MiO brand. (One bottle makes about 24 servings.) “It’s an entirely new category.”

Kraft officials say that in an era of personalization, it’s all about dripping as many drops of flavor as you want into your water.

In focus groups, says Liza Laibe, Kraft beverages senior brand R&D manager, “Consumers tell us they can’t believe nobody has thought of this before.”

Cashing in on muscle 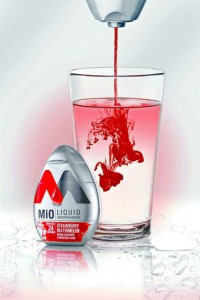 Competitors say Kraft may be mimicking what several very small companies have already done. But unlike its predecessors, Kraft has distribution and marketing muscle to turn the line into a behemoth.

While MiO has no artificial flavors, it does have artificial colors, artificial sweeteners and preservatives. That’s something some of the smaller brands have avoided.

“The little guys are taking this concept and doing it right,” says Tom Cangley, co-founder of Capella Flavors, maker of Capella Drops, a water flavoring brand it’s sold for about six years.

Kraft says it concocted the MiO concept during an “innovation day” summit for its beverage unit last year. The company insists it’s not marketing MiO as better-for-you. The target, Laibe says, is men and women 18 to 39 who prefer to customize their experiences, including what they drink.

Like Kraft’s wildly popular Crystal Light, the new flavoring line could be a big hit with women, says Lynn Dornblaser, new products guru at Mintel. Even so, she asks, “How many different ways do consumers need to change a plain bottle of water?”