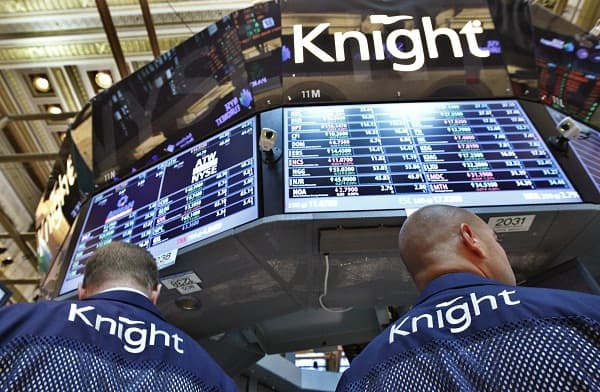 A group of shareholders seem to have put forward a 256.1 billion pound or $400 million financing deal in favour of Knight Capital Group Inc. and the latter looks all set to deal the deal which will provide the trading firm with the opportunity to get back into business after it sustained a harsh blow in the form of a economic loss amounting to $440 million. However, sources who are aware of the situation commented that the deal might prove to be too dear to the investors.

The deal is sure to assist Knight in continuing its operations and prevent any more interruption and insecurity for its brokerage consumers, which consist of eminent firms like Fidelity Investments, Vanguard and TD Ameritrade. It was reported by a source that a statement confirming the outcome of the deal was scheduled for a tentative early Monday release.

It was only last Wednesday that the shareholders associated with Knight Capital Group Inc. had to pay a hefty cost in order to keep the business from going under after some problems with the software led to a great deal of disorder which could not be sorted out before forty-five minutes had passed. The incident also caused a significant amount of damage to the company’s reputation and brought about a substantial decline in the loyalty of clients. Shares which were worth $10.33 even last Tuesday may now be valued at $1.50, which is almost 85 percent less.

According to sources, resources in the form of capital is being offered by shareholders, the likes of which include private equity organizations such as Chicago market developer Getco that also happens to include General Atlantic, the private equity firm, as an investor; the Blackstone Group and financial services firms Jefferies Group Inc, Stephens Inc, TD Ameritrade and Stifel Nicolas. Sources also said that the funding is likely to be carried out through the medium of exchangeable preferred stock, which will carry a conversion price range amounting to almost $1.50 per share, in addition to bearing a coupon of 2 percent. One source in particular reported that the group of investors is expected to own about 70 percent to 75 percent of Knight Capital as a result the conversion.

No comment was given by spokespersons at Knight, TD Ameritrade, Jefferies, Blackstone, General Atlantic and Stifel. Getco and Stephens officials were not available for comment at the moment. News of the deal had been broken earlier.

Trouble began at Knight on Wednesday morning when a software glitch occurred which was responsible for directly affecting the New York Stock Exchange and flooding it with inadvertent orders for thousands of stocks. This error provided a large boost to a few shares which increased by more than 100 percent leaving the corporation with trading loss. Being the country’s biggest supplier of retail market-making in Nasdaq-listed stocks as well as the New York Stock Exchange, Knight is responsible for buying and selling shares for consumers. It offers liquidity to the equity market by buying and selling with its own capital to ensure that its operations run smoothly and effectively.

Carrie Ann
Carrie Ann is Editor-in-Chief at Industry Leaders Magazine, based in Las Vegas. Carrie covers technology, trends, marketing, brands, productivity, and leadership. When she isn’t writing she prefers reading. She loves reading books and articles on business, economics, corporate law, luxury products, artificial intelligence, and latest technology. She’s keen on political discussions and shares an undying passion for gadgets. Follow Carrie Ann on Facebook
« Stimulus from US Fed and ECB Leads to Rise in Asian Shares
Ford fears $1billion loss in Europe and ending up with a smaller profit in 2012 »
Leave a Comment
Close