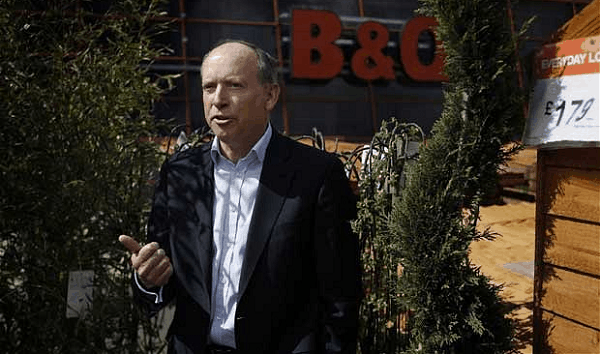 On the 29th of November, Kingfisher Plc posted its third-quarter profit. According to a statement, the Europe’s largest home-improvement retailer saw a 6 percent drop in the period ended October 27 as sales declined in its main markets in France and the UK, not to mention that the company’s results were affected by unfavorable foreign exchange movements as well.

Kingfisher Plc’s retail profit dropped approximately 6 percent to nearly £257 million in the third quarter ended on the 27th of October, compared to about £273 million a year ago. The company’s retail profit missed an analysts’ average estimate of roughly £259.

According to released data, Kingfisher Plc’s sales at UK and Ireland stores, which had been opened for at least 12 months, decreased as much as 3.8 percent. As for the company’s second main market, Kingfisher Plc saw its like-for-like sales in France dropped approximately 2.8 percent. Both figures reported by company did not meet analysts’ forecasts.

The company, which runs B&Q, Screwfix, Castorama and Brico Depot, reported a 3.9 percent decrease in its total sales to approximately £2.7 billion.

The Europe’s largest home-improvement retailer has been facing tough economic conditions in France, which is the Kingfisher Plc’s largest source of earnings, not to mention the growing uncertainty among its British consumers who are under pressure as inflation speeds up and the UK economic recovery is weak.

The company, however, ended the third quarter with net cash of approximately £222 million.

Ian Cheshire, chief executive officer at Kingfisher Plc, acknowledged the results, underlying: “Our markets remain challenging, with consumer confidence still weak and so we maintain our strong focus on margin, costs and cash.” Kingfisher CEO Ian Cheshire tries to remodel the company’s operations to secure profitability and growth by buying products directly from cheaper centers, checking a brand-new format in the Chinese market, reducing the cost of acquiring merchandise as well.

Certainly not only Kingfisher Plc feels the effects of deteriorating economic conditions in troubled  Europe, also other retailers experience disposable incomes due to inflation and austerity measures which have been implemented by governments.

In addition, data indicated that disposable incomes in Kingfisher’s other international businesses, including those based in Poland, China, Spain in Russia decreased just 0.8 percent. The group’s strong growth in the Russian market were, however, balanced by both lower sales and profit in the Polish market. Moreover, Hornbach Holding AG, in which Kingfisher Plc holds more than 2o percent shares, adjusted its annual sales and earnings forecasts.

It is worth mentioning that the Kingfisher Plc’s profit was negatively affected by nearly £16 million due to unfavorable exchange movements from translating euro and Polish zloty overseas profits into sterling.

Even though Kingfisher Plc is struggling amid tough economic conditions, the company has recently launched its 1,000th store.