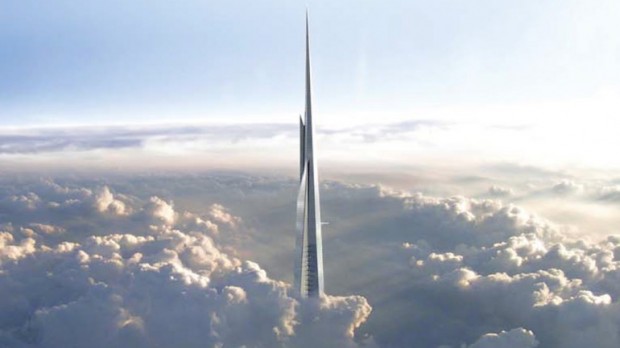 All set to overshadow Burj Khalifa, currently the world’s tallest building, Kingdom Tower will be built by the Bin Laden family in Jeddah, Saudi Arabia, as the focal point of Kingdom City.

Initially, the Kingdom Tower been planned to stand one mile (1.6 km) high and be called the Mile-High Tower. However, after soil testing in the area revealed results that doubted whether the location could support a building of that height, the building was scaled down to now stand 1 kilometer tall. 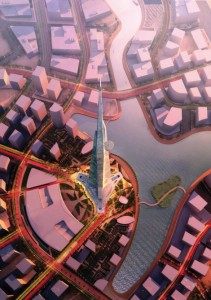 Chicago-based designers Adrian Smith + Gordon Gill (AS + GG) have been officially announced as the architects for the Kingdom Tower.

The Saudi Bin Laden Group,  headquartered in Jeddah,  is a multinational construction conglomerate and holding company for the assets owned by the bin Laden family which renounced all associations with the late Al Qaeda leader years ago.

To be built on the outskirts of the Red Sea in Jeddah, the traditional gateway to the holy city of Mecca, the cost for building the Kingdom Tower has been estimated at around $1.2 billion.

The tower, will offer total built space of 5.7 million square feet (530,000 m2), and will house a Four Seasons hotel, Four Seasons serviced apartments, Class A office space, and luxury condominiums along with the world’s highest observatory.

Adrian Smith, in a statement, said that the design firm’s vision for the Kingdom Tower is “one that represents the new spirit in Saudi Arabia.”

Saying that the slender, subtly asymmetrical massing of the tower “evokes a bundle of leaves shooting up from the ground – a burst of new life that heralds more growth all around it,” Smith added that, “this tower symbolizes the Kingdom as an important global business and cultural leader, and demonstrates the strength and creative vision of its people. It represents new growth and high-performance technology fused into one powerful iconic form”. 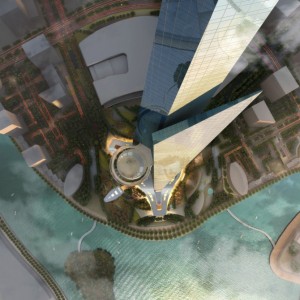 With an exterior wall system that has been designed to reduce wind loads and hence minimize energy consumption, the three sides of the triangular building offer setbacks that serve as shadowed pockets shielding areas of the building from direct sunlight while also functioning as outdoor terraces.

The tower’s sleek, streamlined form arises from a three-petal footprint with the aerodynamic tapering wings of the building helping cut down structural loads.

Of its 59 elevators, 5 will be double-deck ones, while the building will also offer 12 escalators.

Currently headed by Bakr bin Laden, who is Chairman of the group, the Saudi Bin Laden Group has in the past carried out important government contracts such as refurbishing the shrines at Mecca and Medina, and is widely quoted as having annual revenues of around $5 billion.

The Federal Communications Commission rejected by a vote of 3-2 on Tuesday to freeze the rollout of Ligado Networks’ nationwide mobile bro...
1 hour ago