KFC is continuing with its experiments with plant-based meat products in a bid to stay in step with future foods.

KFC, the iconic fast-food chicken brand is taking the next step forward and innovating on changing tastes and more sustainable alternatives to meats.

KFC announced that it is investing in creating a “restaurant of the future” and has tied up with 3D Bioprinting Solutions research laboratory in Russia to craft a “meat of the future” in response to the growing popularity of a healthy lifestyle and nutrition.

The project aims to create the world’s first laboratory-produced chicken nuggets. They will be as close as possible in both taste and appearance to the original KFC product while being more environmentally friendly to produce than ordinary meat, says a statement from KFC. 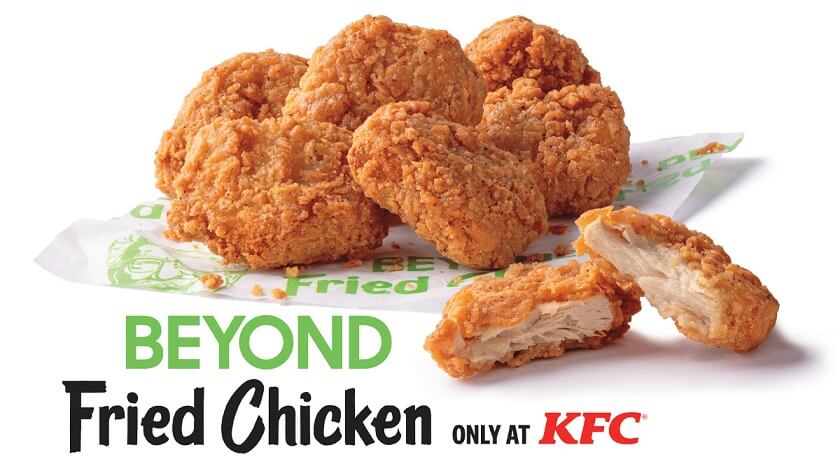 The company is already readying to do a final product for testing in the fall of 2020 in Moscow.

“At KFC, we are closely monitoring all of the latest trends and innovations and doing our best to keep up with the times by introducing advanced technologies to our restaurant networks. Crafted meat products are the next step in the development of our “restaurant of the future” concept. Our experiment in testing 3D bioprinting technology to create chicken products can also help address several looming global problems. We are glad to contribute to its development and are working to make it available to thousands of people in Russia and, if possible, around the world”, said Raisa Polyakova, General Manager of KFC Russia & CIS.

The economics of clean meat

3D Bioprinting Solutions is developing additive bioprinting technology using chicken cells and plant material to reproduce the taste and texture of chicken meat without involving animals in the process. KFC will supply all the necessary ingredients, its secret to the distinct KFC signature taste. Bioprinting Solutions says it is a pioneer in this form creating complex products from animal cells.

“3D bioprinting technologies, initially widely recognized in medicine, are nowadays gaining popularity in producing foods such as meat. In the future, the rapid development of such technologies will allow us to make 3D-printed meat products more accessible and we are hoping that the technology created as a result of our cooperation with KFC will help accelerate the launch of cell-based meat products on the market”, said Yusef Khesuani, co-founder and Managing Partner of 3D Bioprinting Solutions.

The 3D bioprinting method is viable as the Biomeat it produces has the same micro-elements of meat minus the additives and harmful chemicals that are used in traditional farming and animal husbandry.

According to a study by the American Environmental Science & Technology Journal, lab-grown meat has a minimal negative impact on the environment. It cuts energy consumption by half and the greenhouse gas emissions rare reduced 25 to 100 fold compared to the traditional farm-based meat production.

Cell-based meat products have the added advantage of being ethical as no harm is done to animals in the process.

KFC said in a statement, “It remains committed to continuous improvement in animal welfare from the farm and through all aspects of our supply chain, including raising, handling, transportation and processing.”

Arrival in the US

In the US, KFC has tied up with Beyond Meat for expansion of its Beyond Fried Chicken.

It already has trialed the plant-based meat in Atlanta, Nashville, and Charlotte, and now it is moving to test it in Southern California, near Beyond Meat’s headquarters in Los Angeles.

From July 20, KFC will be selling Beyond Fried Chicken at 50 stores in the Los Angeles, Orange County and San Diego areas, the company said.

Lab-grown meat and plant-based meat products are already being used by restaurants to satisfy their more eco-conscious customers and vegans. Climate change, methane gas emissions, and a growing food crisis have forced the world to look at alternatives. The use of technologies based on 3D bioprinting may become a promising field in this area.