June’s Smart Oven recognizes Food and Cooks Perfectly for You 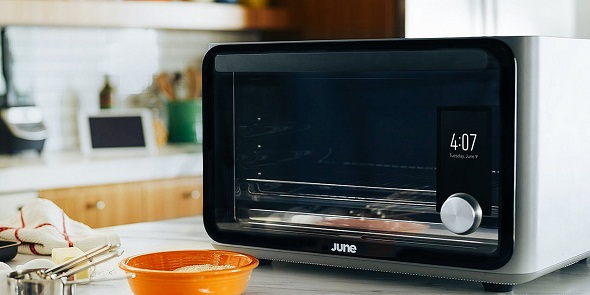 June’s Smart Oven recognizes Food and Cooks Perfectly for You

Former Apple engineers have built an intelligent oven that uses image recognition technique to identify your food and cook perfect meals for you.

Professional chefs are already trained for many years, and they know how to perfectly roast a chicken or bake a burn. But, for untrained chefs, this new smart oven is helpful and beneficiary in a sense that for untrained wannabe chefs it is easy to achieve similar results at home. So, now you don’t have to starve for food and it will be easy for people to cook their food at home, using this smart system.

A computer-based countertop appliance that is big enough to store large items such as roasts, and pizzas. June’s smart oven is fitted with a 5-inch touch screen display, Nvidia processors, sensors, built-in cameras, along with internet connectivity. Its glass door has been designed so that it won’t get hot and thereby, its internal heating elements are made of carbon fiber.

In any case, what truly sets the Wi-Fi-enabled June apart from other appliances is the hardware and software that power its food recognizing abilities.

The smart oven, internally is equipped with a wide-angle HD camera that when combined with machine intelligence algorithm (MIA) along with the oven’s built-in digital scale, enables the system to recognize the food items as well as estimates how much time it’ll take to bake the food.

At present, the company stated that the smart system is able to identify common food items like bread, and meat, the system will reveal more accurate result over time, and the air updates will expand its database.

The smart oven comes along with a companion app, which keeps smartphones, and tabs on the progress of your food’s dish and sends notifications when food items are cooked. The major advantage of using a companion app is that you can use it as a remote control to adjust the temperature or turn off or on, once your meal is ready for serve.

The app also supports live stream of data from the oven’s camera, so home cooks can observe the progress of their meal remotely. Additionally, the app has an accurate collection of food recipes to help users plan meals.

At last, the smart oven comes with a core temperature test, which that tracks the internal temperature of the system (what you’re cooking), which can prove to be useful for temperature -dependent dishes like baked and steaks foods.

The June intelligent oven is priced at $1,495 during a pre-order period. The company says that it envisions delivering the first orders in spring 2016, and will cost around $2,995 after July 10.

Anna Domanska
Anna Domanska is an Industry Leaders Magazine author possessing wide-range of knowledge for Business News. She is an avid reader and writer of Business and CEO Magazines and a rigorous follower of Business Leaders.
« HSBC Holding sheds about 50,000 jobs in push to cut billions in costs
Alibaba’s Jack Ma refers Internet as ‘Treasure Island’ »
Leave a Comment
Close

The Squid Game segments were watched by at least 132 million people in the first 23 days of the show on Netflix. Know what excited the viewers.
5 hours ago