With increasing issues of global warming, air pollution, and energy crisis, it seems that the world needs to now slow down on the technology aspect and must try to focus on the environment for some time. The automobile company Toyota Motor Corp is also now considering finding solutions for the environmental concerns. Toyota will be joining hands with Panasonic Corporation in order to work towards developing batteries for electrical vehicles (EV). And secondly Toyota EV will soon be rolling out and they say it won’t be just one, but more than 10.

With the rapidly changing industry, Toyota seems to be taking up a lot on their plate. In order to stand first in the race of electric vehicles, Toyota is coming up with more EVs.

According to the statement made by the automobile company, Tokyo Motor Corp. will be manufacturing more than 10 battery electric car models by 2020. The sales of the same will start in China first. The company will then subsequently begin their sales in the United States, Europe, Japan, and India. The Japanese company also stated that by the year 2025, all the Toyota and Lexus models will either feature with an electric version or be fully electric. The company’s agenda is to sell around 5.5 million traditional gasoline-electric hybrids, plug-in hybrids, hydrogen fuel cell vehicles, and EVs by 2030. The automobile company expects to sell a million EVs alone a year.

This shift towards Toyota EV has led the company to reach the front of the race among Japanese car companies. The list of companies also includes Nissan Motor Co. In order to reduce pollution that vehicles emit and to conform to the strict regulations, global automakers are competing to come up with more electric cars. 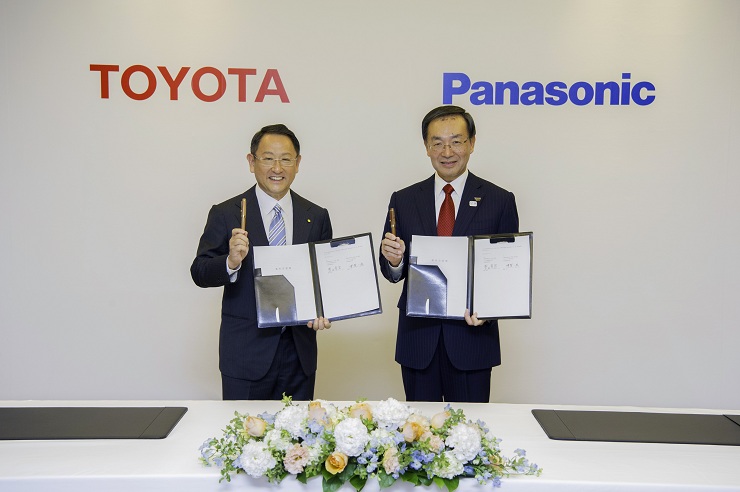 The agreement is also to address the growing expectations for electrified vehicles.

The main agenda for this joint venture is in order to achieve its goal of having green cars take over half the global sales by the year 2030. The global market leader in automotive lithium batteries, Panasonic, is already into making batteries for Toyota’s petrol-electric and plug-in hybrid vehicles – according to an existing agreement. The agreement is also to address the growing expectations for electrified vehicles.

The companies are avoiding the cylindrical batteries that Tesla makes use of. The joint venture is planning to develop “prismatic” cells. The batteries are squared and flat with aluminum housing. They are usually used in cell phones. The prismatic cells are lighter and smaller than the cylindrical ones. The only drawback of the battery is that they cost more and tend to overheat and swell up.

Toyota and Panasonic share their business relationship since 1953. Both the companies aim towards mutually improving their manufacturing capabilities. Panasonic’s key business is building automotive lithium-ion batteries. The company is still taking more efforts in order to improve the safety and capacity of its batteries. But, this would only be possible with the help of the accumulated technological knowledge in the battery industry.

Christy Gren
Christy Gren is an Industry Specialist Reporter at Industry Leaders Magazine she enjoys writing about Unicorns, Silicon Valley, Startups, Business Leaders and Innovators. Her articles provide an insight about the Power Players in the field of Technology, Auto, Manufacturing, and F&B.
« The Drone That Saves Lives
BMW EV Touches a Million Lives »
Leave a Comment
Close