John McAfee arrested for tax evasion and fraud in Spain

John McAfee, the cybersecurity entrepreneur, has been indicted by the DoJ and the SEC both for tax evasion and cryptocurrency fraud.

John David McAfee, cybersecurity entrepreneur and crypto personality, was arrested in Spain on Tuesday following an indictment for tax evasion and willful failure to file tax returns by the US Justice Department.

McAfee is facing extradition to the US. According to the indictment, John McAfee earned millions in income from promoting cryptocurrencies, consulting work, speaking engagements, and selling the rights to his life story for a documentary but failed to file tax returns from 2014 to 2018.

McAfee allegedly evaded his tax liability by depositing his income into bank accounts and cryptocurrency exchange accounts in the names of nominees. He attempted to evade the IRS by concealing assets, including real property, a vehicle, and a yacht, in the names of others. 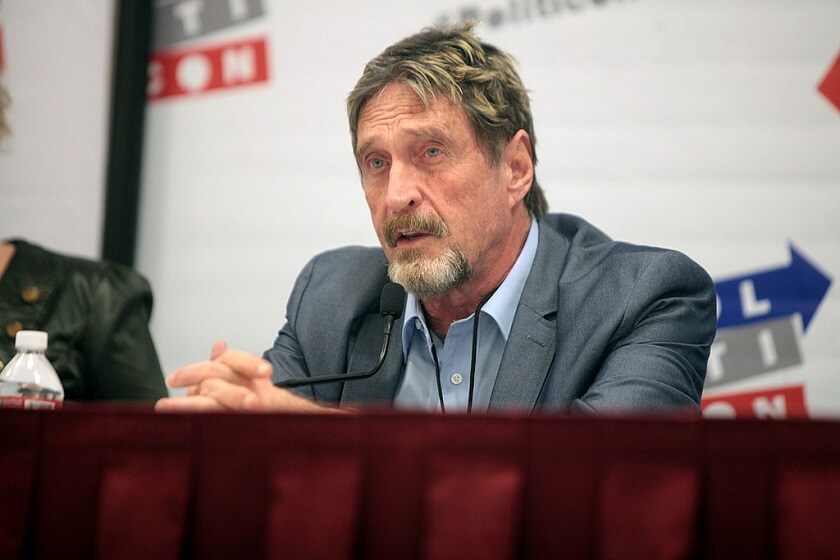 John McAfee speaking at the 2016 Politicon at the Pasadena Convention Center in Pasadena, California.

Apart from the Department of Justice indictment the Securities and Exchange Commission (SEC) has filed a report detailing in length an investigation into McAfee’s alleged fraudulent activity promoting a number of ICOs (initial coin offerings) throughout 2017 and 2018 and has also accused McAfee of receiving more than $23.1 million worth of cryptocurrency assets for promoting the ICOs.

The indictment does not allege that during these years McAfee received any income or had any connection with the anti-virus company bearing his name.

The SEC report specifically notes that McAfee allegedly received more than $11.6 million worth of BTC (bitcoins) and ETH (etherium) tokens for promoting seven ICOs. Unfortunately, those offerings were not named in the suit. He additionally received $11.5 million worth of the promoted tokens, the suit alleges.

The SEC in its investigation wrote, “When certain investors asked whether he was paid to promote the ICOs, McAfee allegedly denied receiving any compensation from the issuers. McAfee made other false and misleading statements, such as claiming that he had personally invested in some of the ICOs and that he was advising certain issuers. The complaint alleges that Jimmy Gale Watson, Jr. assisted McAfee by negotiating the promotion deals with the ICO issuers, helping McAfee cash out the digital asset payments for the promotions, and, for one of the ICOs McAfee was promoting, having his then-spouse tweet interest in the ICO. Watson was allegedly paid at least $316,000 for his role. According to the complaint, while McAfee and Watson profited, investors were left holding digital assets that are now essentially worthless.”

An indictment merely alleges that crimes have been committed, which have yet to be proved in a court of law.

McAfee claimed in a video that he put out that he was a 2020 US Presidential candidate for the Libertarian Party and was campaigning in exile, after he was charged with “using Crypto Currencies [sic] in criminal acts against the U. S. Government” in January 2019. In that same video, he said he hadn’t paid taxes in eight years. He also claimed the CIA had “attempted to collect us” in a July 2019 tweet, where he was photographed holding a gun. It ended with him being arrested briefly by the Dominican Republic authorities.

Christy Gren
Christy Gren is an Industry Specialist Reporter at Industry Leaders Magazine she enjoys writing about Unicorns, Silicon Valley, Startups, Business Leaders and Innovators. Her articles provide an insight about the Power Players in the field of Technology, Auto, Manufacturing, and F&B.
« Danimer is taking the Spac route to go public
Airline industry on the brink of collapse with no aid in sight »
Leave a Comment
Close