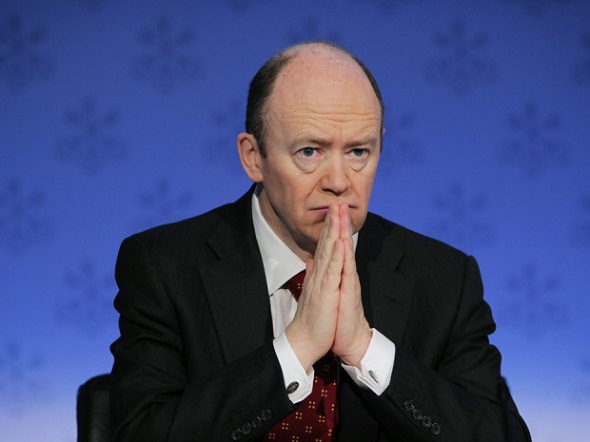 On Sunday, Germany’s largest lender – Deutsche Bank purged its leadership by delegating Briton John Cryan as CEO to replace Anshu Jain only two weeks after Jain was given more power to reorganize the bank.

The Bank has strived to restore an image tarnished by a raft of regulatory and legitimate issues that incorporate probes into affirmed control of benchmark premium rates, mis-offering of subsidiaries, money laundering, and tax evasion. The bank exhibited a radical management shake-up on May 21 in a last ditch attempt to restore confidence in its management, however, a few investors requested for more changes.

The bank said that Cryan, 54, has been on the bank’s supervisory board since 2013 and was a former CFO of rival bank UBS, and added that he will replace co-CEO Jain, who will resign on June 30, and will become the sole CEO when the other co-CEO, Juergen Fitschen, ventures down one year from now.

In a Deutsche statement announcing Cryan said that there was work to be done, and their future will be outlined by how well they deploy on strategy, impress clients, and decrease complexity.

A senior bank executive stated that the new CEO, who starts on July 1, was deeply indulged in the bank’s new strategy blueprint and is unlikely to roll out significant developments to the bank, and added that the strategy won’t be reformulated, yet there’s definitely a room to reshape the details of strategy.

Analyst at investment bank, Jeffries applauded Cryan’s reputation at UBS for underpromising to over-deliver by saying that Cryan would be more inclined to switch Deutsche’s evil fortunes without raising new capital or changing strategy once again.

Supervisory board director Paul Achleitner said that the decision by Jain and Fitschen to resign demonstrated their commitment to putting the bank’s interest in front they could call their own by praising their contributions of the bank.

Jain determined that whoever was going to see through the strategy at Deutsche Bank, was expected to focus on an entire five years and he was not ready to do this, as revealed by source familiar with the situation. The source added that Jain initially examined this with co-CEO Fitschen and the pair then agreed that both would offer their resignation to Achleitner, after which, it will let the supervisory board know of their decision.

Jain, an Indian-born British national, landed the top spot at Deutsche in 2012 after the investment banking money division; he ran consistently, delivered about 85 per cent of group profit, and frequently outperformed peers.

In any case, tougher regulatory requirements and law suit, including a $2.5 billion fine for settlement claimed that Deutsche traders rigged benchmark interest rates, took the sparkle off a division frequently alluded to inside as – Anshu’s armed force.

Making Jain directly in charge of cutting Deutsche Bank’s expenses by 4.7 billion Euros ($5.2 billion), offering its Postbank retail business, and paring back its investment bank put tremendous pressure on the executives. After feedback from shareholders at last month’s AGM, Jain tended to a social affair of senior staff and coordinators, offering an early insight that he was arranged to leave. Jain told them that he would prefer not to hinder the development of the bank and if necessary, and will step side.

Fitschen was hired as co-CEO to keep up the bank’s German profile, yet his ability to offer the groups’ strategy to domestic shareholders has been impeded by his own legal issues.