What is Hurting Business Finances of your Company? 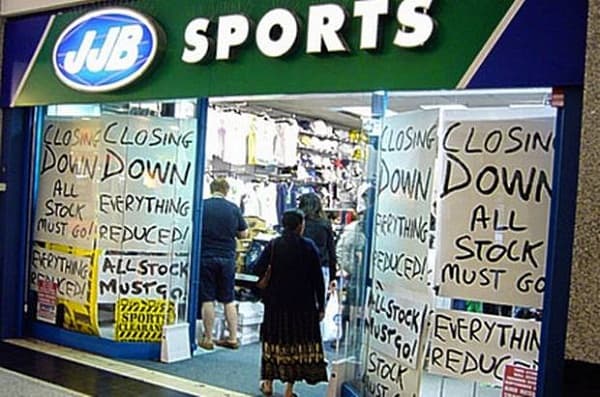 JJB Sports put itself up for sale on Thursday. Company’s officials informed investors that JJB Sports’ shares might be worthless. As the company failed to secure the fresh injection of cash from investors JJB Sports’ shares dropped 71 percent to 0.67 pence. The retailer is at risk of becoming the next British retail casualty of the financial crisis.

The news released by the company’s officials raises questions regarding the long-term future of JJB Sports, the sports clothing and equipment chain with approximately 1800 outlets and shops. The retailer employs more than 4,000 people both in the Uk and Ireland.  JJB Sports has been struggling to survive after a drop in sales.

JJB Sports secured itself just couple of months ago when it gained £20million from American retailer Dick’s Sporting Goods and an additional £10million from existing shareholders.

However as it turned out it was not enough to fight with decreasing sales and stiff competition in the UK market.  But not only JJB Sports is struggling with weak consumer spending, muted wage growth and austerity measures implemented by government, all UK store chains face the music. Woolworths and MFI went of business because of price-cutting introduced by both supermarkets and online shops.

JJB Sports’ officials informed that the company would not be able to gain new funds to take further steps to survive. The company was holding talks with its shareholders and suppliers in recent months to secure money for a turnaround and restructuring, even though it had already received money from its largest stakeholders, Invesco, the Bill and Melinda Gates Foundation, Crystal Amber and Harris Associates, four months ago. These recent negotiations were not successful and because of that JJB Sports asked its adviser, KPMG, to explore a JJB Sports’ sale.

In a statement released on Thursday JJB noted, “Following these discussions, the directors do not believe that the company will be able to raise the level of funds required to implement the turnaround.” The company’s officials also warned that a possible proposal or offer for the group might not attribute value to JJB Sports’ shares. The company had a net debt of £16.5 million at August 28, against existing banking facilities valued at £25 million. Even the long-awaited 2012 European football championships and London Olympics failed JJB Sports’ hopes for increasing trading. The data released by the group shows that JJB Sports’ sales dropped 3.3 percent in the six weeks to 26th of August.

Given the current debt, there can be no guarantee whether any proposal or offer may attribute value to JJB Sports’ shares, according to the company’s statement published on Thursday.

JJB Sports’ shares dropped 71 percent to 0.68 pence, giving it market value of approximately 3 million pounds. In August 2010 the company market value was £500 million. Analysts at Charles Stanley are convinced that JJB Sports will follow a similar process as Blacks Leisure, which means that we can anticipate the possible sale of parts of company’s businesses. Sports Direct and JD Sports Fashion, JJB Sport’s main rivals, are likely to buy it out.

However no deadline for sale has been set yet.