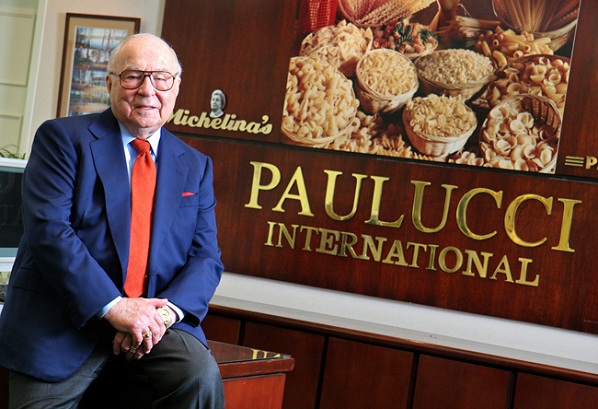 Jeno Paulucci, inventor of the pizza roll, past away on Thursday at the age of 93. The food magnate dies just four days after his wife, Lois. The cause of death was renal and coronary failure. Paulucci is survived by his daughter Gina, his son, Michael; another daughter, Cindy Selton; four grandchildren; and many great-grandchildren.

The Biggest Accomplishments of Jeno Paulucci

Paulucci was a pioneer of ready-made foods. His first successful product was Chun King, a line of Chinese canned food featuring chow mein, bean sprouts and other Asian vegetables, in 1944. Chun King eventually became a mainstay in postwar America. In 1957, Mr. Paulucci patented the Divider-Pak, packaging that keeps the food separate from its sauce, which is still being used today in many Asian-themed ready-made foods. Paulucci then sold Chun King to R. J. Reynolds for $63 million in 1966.

After that, in 1968, Paulucci founded Jeno’s Inc., a company that started selling pizza dough kits. It then started to sell frozen pizzas and a variety of snacks. The most notable of these snacks was the pizza roll, a combination single slice pizza and egg roll. Paulucci then sold Jeno’s Inc. to Pillsbury for $135 million in 1985. The next year, Jeno’s Pizza Rolls were rebranded as Totino’s Pizza Rolls, which are still being sold in stores today.

Later on, in the early 1990s, Mr. Paulucci founded Michelina’s Inc. (named after his mother), which sold ready-made pasta and Mexican dishes. Paulucci was still head of the company when he died. The company, now known as Bellisio Foods, sells its products worldwide.

The Beginnings of Jeno Paulucci

Born Luigino Francesco Paulucci, Jeno Paulucci was born on July 7, 1918, in Aurora, Minn., to Michelina and Ettore Paulucci, immigrants from Bellisio Solfare, Italy. Ettore came to the United States to work in the iron mines of northeastern Minnesota, but an injury kept him from working and the family was supported by a grocery store that Michelina ran. Jeno Paulucci started working in that grocery store at the age of 12. Right after high school, Paulucci got a gig with a regional produce wholesaler, and then worked as a traveling salesman for a chain of grocery stores. For pretty much his whole life, Paulucci worked in the food industry.

Another Side to Jeno Paulucci

Besides being a savvy businessman in the food industry, Paulucci was also a humanitarian. Paulucci created, or had a strong hand in creating, half a dozen or more civic organizations, including Northeast Minnesota Organization for Economic Education, the Jeno & Lois Paulucci Family Foundation, and the National Italian American Foundation. Paulucci was considered a dear member of the Duluth community, taking the time to do charity and to give back to those in need.

Overall, Paulucci made huge contributions to the food industry, pioneering those ready-made foods that many folks still enjoy today. He was an incredibly successful businessman, one who tried to do good while making money.