Japan’s Prime Minister Yoshihide Suga said on Monday that his country will be carbon neutral by 2050 affirming the country’s climate change commitments.

“We will bring the total amount of greenhouse gas [emitted by Japan] to net-zero by 2050, meaning carbon neutral,” Suga said in his first policy address to parliament since taking office.

“I declare we will aim to realize a decarbonized society,” he added.

Tokyo had previously committed to achieving carbon neutrality sometime in the latter half of the century and had been vague about the exact timeline. This new goal puts the world’s third-largest economy on the same timeline as Europe, Britain, and a decade ahead of China, which last month set a 2060 goal. Prime Minister Suga’s commitment is in line with the growing international commitment to saving the environment. 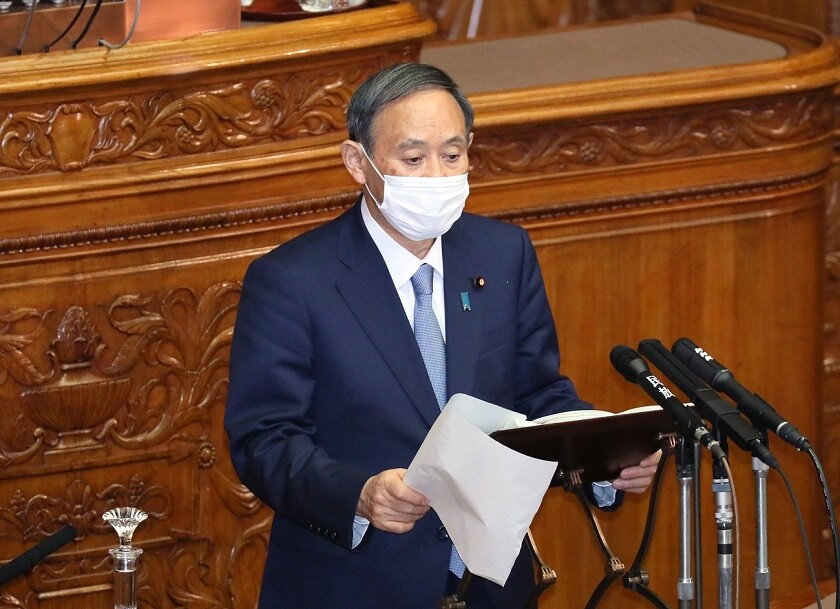 Photograph of the Prime Minister delivering a policy speech during the plenary session of the House of Representatives.

China’s Foreign Ministry spokesman Zhao Lijian told reporters that China was eager to cooperate with Japan to promote a “green recovery” plan, initiated by the European Union to boost investment in the environmental sector as a way to recover from the pandemic and prevent a further slide into climate crisis.

“Climate change is a major challenge facing all mankind. We must adhere to multilateralism, gather the strength of all countries and work together to deal with it,” Zhao Lijian told reporters. “Japan’s move will help strengthen the international community’s joint efforts.”

Japan is still h heavily reliant on coal and other fossil fuels for its energy needs. Prime Minister Suga did not give precise details on how Japan will achieve the goal but said the technology would be essential.

He also mentioned renewable energy and nuclear power, stressing that safety would be a priority, something that Japan is particular about following the Fukushima nuclear disaster after a tsunami.

Japan, a signatory to the Paris Agreement, was the sixth-biggest contributor to global greenhouse emissions in 2017, according to the International Energy Agency.

The shutting down of nuclear reactors after the Fukushima disaster has led to the country relying more on fossil fuels for its energy needs.

The country’s 140 coal-fired power plants provide nearly a third of its total electricity generation. Coal is the second-biggest power-generation method behind LNG-fired plants, which provide 38 percent of the nation’s needs.

Japan launched a new renewable energy plan in 2018, aimed at having 22-24 percent of the country’s energy needs met by renewable sources, including wind and solar by 2030, a figure critics called unambitious based on current levels of around 17 percent. That plan also called for nuclear to provide more than 20 percent of the country’s energy needs by 2030.

Anna Domanska
Anna Domanska is an Industry Leaders Magazine author possessing wide-range of knowledge for Business News. She is an avid reader and writer of Business and CEO Magazines and a rigorous follower of Business Leaders.
« Celltrion of S Korea receives US emergency approval for rapid test Sampinute
Exxon, JERA of Japan sign MOU with Vietnam for LNG power station »
Leave a Comment
Close

Experts believe that although EV stocks initially benefited from the optimism prevalent in the market, supply chain issues and high prices have put a dampener on demand for electri
20 hours ago