The Japan Aerospace Exploration Agency (JAXA) in order to magnify their efforts to find a feasible alternative to nuclear power, has laid out plans in an updates energy source proposal.  JAXA seeks to face its energy woes for the coming decades by launching a series of platforms – ‘a solar-based solar energy farm’ with batches of solar pants into the orbit around the planet Earth in order to collect Solar Energy. 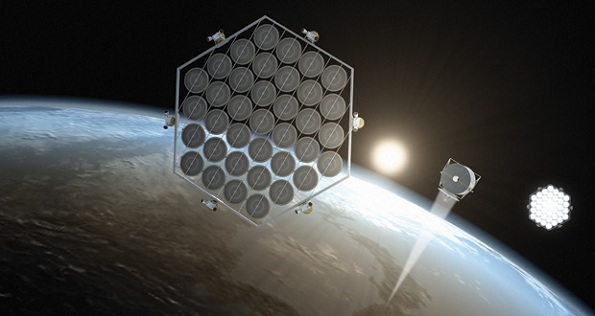 The proposal comes in wake of The Great East Japan Earthquake and tsunami which affected Japan’s economy, for massive amounts of fuels were being imported for energy generation. The proposal could help replace nuclear power as its primary source of energy, which is threatened due to ubiquitous earthquakes in Japan that threaten to expose its citizens and land to deadly radiations,

The JAXA proposal will help commercialize space-based energy farm through the series of platforms in space as well as on the ground as mentioned earlier. The space-based platforms would in turn collect light from the Sun and beam them down as microwaves at the ground stations where it will converted into electricity. In a demonstration, JAXA said that it will be fully functional by 2030, given that the initial work for the project being by 2020.  According to the statement by JAXA researcher Susumu Sasaki, the space-based solar energy project would be difficult with vast financial expenses; however the payoff for Japan would be huge since it has the potential to revolutionize energy industry.

The JAXA has devised a series of sophisticated plans for accomplishing it. In a road map provided by JAXA, it is described that the ground and space-based stations will 1-gigawatt commercial systems. These systems will be capable of giving the same output as a nuclear power plant. JAXA will also be setting up a 100-kW SPS version by 2020.

Normally, a nuclear plant threatens its sustainability by heating up the Earth which is created through nuclear energy. The Orbital Solar Farm is although seen as a same threat, will be much more safe, since it does insignificant compared to the sunlight that hits Earth directly and heats it up. Our current global warming problems still revolve around CO2 emissions and not waste heat generation. Bottom of Form

Writing on IEEE Spectrum, Susumu Sasaki said that “It would be difficult and expensive, but the payoff would be immense, and not just in economic terms. Throughout human history, the introduction of each new energy source—beginning with firewood, and moving on through coal, oil, gas, and nuclear power—has caused a revolution in our way of living. If humanity truly embraces space-based solar power, a ring of satellites in orbit could provide nearly unlimited energy, ending the biggest conflicts over Earth’s energy resources. As we place more of the machinery of daily life in space, we’ll begin to create a prosperous and peaceful civilization beyond Earth’s surface.”

Anna Domanska
Anna Domanska is an Industry Leaders Magazine author possessing wide-range of knowledge for Business News. She is an avid reader and writer of Business and CEO Magazines and a rigorous follower of Business Leaders.
« Indian American Scientist develops a printable 50- Cent Microscope that folds like Origami
World’s Most Amazing Panoramic ‘CENTR-Camera’ that records 360-degree video in 4K »
Leave a Comment
Close