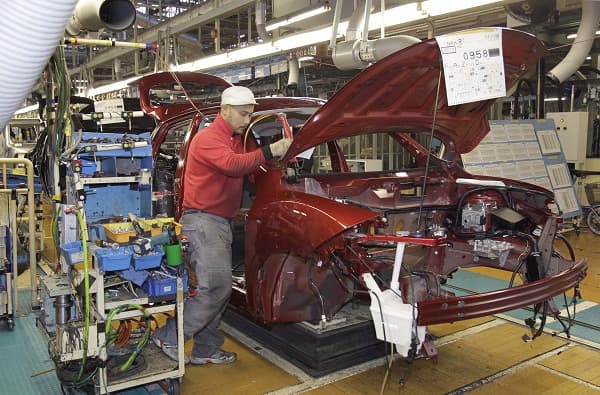 Japan posted weak industrial production numbers for July and an outlook for August and September. According to data, Japan saw a 1.2 percent drop in July from June amid slumping global demand. The third biggest global economy does not show any sign of recovery.

The government published the latest data which shows the 1.2 drop in Japanese industrial production in July. In addition, the released outlook for August and September is not optimistic. Analysts had expected an increase of 1.7 percent in Japanese industrial production as a result of reconstruction spending in the Tohoku area affected by tsunami. Instead Japan noted the decline. The July’s decrease comes after a slight growth of 0.4 in factory output in June and drops of 3.4 percent in May and 0.2 percent in April.

But even manufacturers had forecasted that the factory output would note a growth of 4.5 percent. They also missed the number. These days manufacturers predict that industrial production in Japan will grow by 0.1 percent in August, and drop by 3.3 percent in September. They are now more cautious in their estimates.

According to Masamichi Adachi, senior economist at JP Morgan in Tokyo, the data released by manufacturers is poor. As it was stated by him, if their estimates were accurate, industrial production in Japan would drop for three following quarters. What is worth stating, all five of Japan’s recessions since 1985 started after noting drops for three consecutive quarters.

The government also released data regarding an unemployment rate in Japan. Accordingly, data shows that the unemployment rate in Japan did not note any changes and remained at 4.3 percent for the second month. The Ministry of Internal Affairs and Communications informed that its survey showed that the number of employed dropped 90,000 to 62.77 million in July, while the number of unemployed dell 240,000 to 2.88 million. As for consumer prices, minus fresh foods, it decreased 0.3 percent in July. The drop in consumer prices reflects persistent deflation.

Weak Global and Domestic Demand to Be Blamed

Weak global and domestic demands are to be blamed for taking down Japanese manufacturers, especially electronic makers. These days Japanese electronic producers are struggling with intense competition from South Korean, Taiwanese and others. In addition, the strong yen erodes overseas earning, but at the same time it is also consuming profits.

According to Bank of Japan’s analyst, the situation is very serious because it will be very hard for Japan to avoid possible recession if external demand does not improve. He said: “We can all cross our fingers that China is picking up, that the US ‘fiscal cliff’ can be avoided, or that Greece can remain in the euro-area. It is a very, very difficult time for the global economy.” However, as it was stated, the demand related to reconstruction from last year’s tsunami and earthquake might help to maintain the growth.

It is likely that the released data from Japan will strengthen fears that even extraordinarily loose monetary policies in developed markets are failing to stimulate demand as it was expected. According to Kohei Okazaki, an economist at Nomura Securities Co. in Tokyo, overseas demand is dropping; thereby Japanese industrial production and capital spending are affected.

Anna Domanska
Anna Domanska is an Industry Leaders Magazine author possessing wide-range of knowledge for Business News. She is an avid reader and writer of Business and CEO Magazines and a rigorous follower of Business Leaders.
« New AT&T Stores to Provide Enhanced Retail Experience
Samsung Electronics Gets Support from Japanese Courts in Apple Inc. Dispute »
Leave a Comment
Close