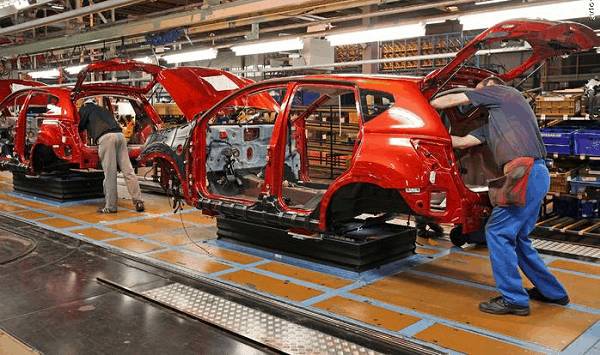 Japan’s top three carmakers, Toyota Motor Corp., Nissan Motor Co. and Honda Motor Co., decided to cut production in China by roughly half as a territorial dispute between Chinese and Japanese governments continues. Due to the territorial dispute Japan’s carmakers have noted a decrease in sales in the world’s largest auto market.

Japan’s carmakers have seen a decrease in sale in the Chinese market since the outbreak of the territorial dispute. Decreases in sales have not only affected the Japan’s carmakers but also producers of other Japanese products. Toyota Motor Corp., Nissan Motor Co. and Honda Motor Co. have decided to halve production in China starting from the 8th of October.

According to sources, Nissan Motor Co. will suspend the night shifts and will continue to operate only during the day “for the time being”. The company has two passenger car factories in China located in Huadu and Zhengzhou.

Toyota Motor Corp. and Honda Motor Co. plan to halve China production by cutting operating hours and slowing down speed of production lines. According to data, sales of Toyota Motor Corp. in China decreased by approximately 50 percent in September from August and nearly 40 percent from a year ago. The company is said to release its official sales figure from September on the 9th of October.  If cuts in China production last for a month, each one of Japan’s top three carmakers will suffer a reduction of approximately 30,000 units to 40,000 units.

The territorial dispute over islands in the East China Sea has already affected trade between China and Japan, Asia’s two largest economies. Japanese factories closed or cut their operations in September over fears that their workers could be targeted by aggressive Chinese protestors.  As it has been stated, Japan’s carmakers and other producers, are going to carefully observe the impact of protests on sales as they fear that anti-Japan sentiment might be more violent in case of any new developments related to the territorial dispute.

Korean carmakers to benefit from the territorial dispute

Korean carmakers, including Hyundai Motor Co. and its affiliate Kia Motors Corp., believe that their sales in China will surpass their initial targets as they have been benefitting from the anti-Japan sentiment since the territorial dispute started.

The two Korean carmakers, Hyundai Motor Co. and Kia Motors Corp., will probably sell more vehicles in 2012 than 1.25 million they had initially estimated. According to compiled data, combined deliveries grew to 127,827 units in September, or approximately 9.5 percent higher than a year ago.

Also other non-Japanese companies believe that they can benefit from the territorial dispute between two Asia’s largest economies as Chinese consumers are not keen on buying Japanese products starting with Toyota Motor Corp. and ending with Sony Corp. According to analysts with JPMorgan Chase & Co., the territorial dispute between Chinese and Japanese governments over islands in the East China Sea will cause Japan’s gross domestic product to shrink this quarter.

Anna Domanska
Anna Domanska is an Industry Leaders Magazine author possessing wide-range of knowledge for Business News. She is an avid reader and writer of Business and CEO Magazines and a rigorous follower of Business Leaders.
« Profit of $7.3 billion posted in the third quarter by Samsung
UK Retail Sales Grows as Weather Cools Down »
Leave a Comment
Close