At school, we’re taught to value success, ergo, we never gain the experience, the maturity, or the wisdom to cope with failure. Because we’re never taught to look at things objectively, we validate failure as definitive and shameful. To James Dyson, failure, coupled with perseverance, spurs on improvement like nothing else. Failure is not fatal. And when James Dyson tells of a sure-fire formula of success in life, believe him!

Frustration Is Often The Mother Of Invention

One summer in the early 1970s, James Dyson was vacuuming his house when he realized his Hoover Junior was losing suction and the dust kept getting clogged. An industrial designer by training, he had the idea of creating a bagless cleaner that would not lose suction as it picked up dirt. The inspiration came from a 30ft-tall cyclone sucking air out of a sawmill. If only, he could create a mini-replica of the 30ft-tall cyclone.

As Dyson continued his bagless obsession, his garden shed became his workshop. All this while, his wife Deidre continued working as an art teacher to keep everyone – James and the three young children, Emily, Jacob and Sam. By the mid-eighties, he had a huge overdraft, which at one point tipped £1 million. But, it didn’t deter Dyson.

To James Dyson, it took 5,127 prototypes and 15 years, for failure to pan out. And, when he launched Dyson Limited to produce his design, nobody else would take on it. One by one they turned him down, apparently, not interested in what he was selling. Meanwhile, the vacuum industry continued selling vacuum cleaner bags, worth $550 million each year.

A few years later, then Hoover’s vice president for Europe, Mike Rutter, said on U.K. national TV, “I do regret that Hoover as a company did not take the product technology off Dyson; it would have lain on the shelf and not been used. 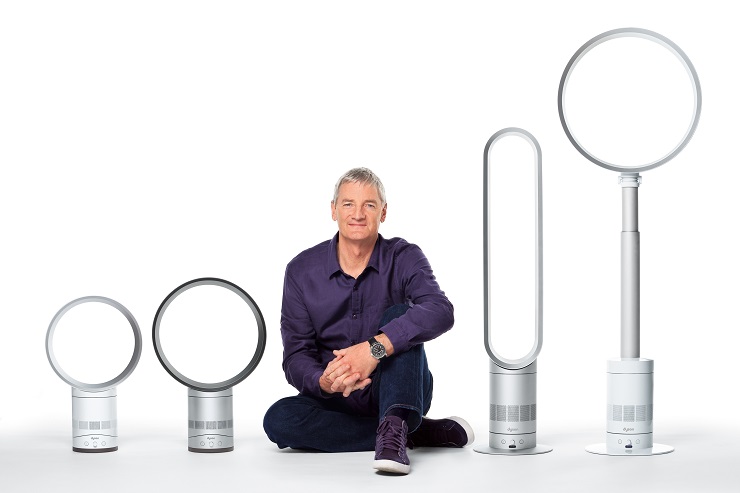 The Dyson dual cyclone vacuum cleaner won the International Design Fair Prize in Japan, went into production in that year. The G-Force cleaner was sold at $2,000 in Japan, but Dyson failed to popularize it. Four years later, Dyson pulled finances to make the product available in his home country, and within 18 months, it became Britain’s best-selling carpet cleaner. Just as his vacuum cleaner rallied as a must-have household item, other Dyson product’s tragically failed. Dyson’s first washing machine, the world’s first dual cylinder, was a gigantic failure. It became James Dyson’s first failure as an entrepreneur.

So when James Dyson entered into the entrepreneurial world, he was sunken under increasing debts and inexperienced. But, he wasn’t a quitter. In an interview with The Telegraph, he confided about early entrepreneurial problems, “It was too expensive to make. As well as that, we were going into a field where everyone had been at it for years and had their lines of suppliers, whereas we were making it here. They had refined and refined their products. We were starting from scratch.”

After years and years of development and marketing, Dyson was approached by then vice president for global operations of Amway in 1984. Amway wanted a Dyson’s vacuum cleaner, at any or no cost. As Dyson describes in his recent book, Against the Odds, “After a few days, they offered me what seemed a huge sum for a license for the Dual Cyclone.”

After four days of negotiations, Dyson and his partner met with lawyers and company executives on a deal, ready to sign. A few days, he received a letter from Amway’s lawyers accusing Dyson of misrepresentation on the grounds that the Dual Cyclone vacuum cleaner wasn’t ready for market. As the agreement was being contested with Amway, Dyson was unable to market his product elsewhere. The legal repercussions of which were dreadful. After several months, in early 1985, the case was resolved, with Dyson paying back every penny they had advanced, and in return terminating Amway’s license and having his patents returned.

In November 1987, Dyson received a call from an associated who announced that Amway had created a cyclonic vacuum cleaner, just like Dyson’s.

“What was most unfair I felt was that I had invested all that money and all those years in research and development of my invention, and on patenting. I had had to borrow and pawn and risk the welfare of my own family and now some enormous organization with more money and man hours than I could even dream of, were just going to get on with selling their version. They were out on the market before us, and, it transpired, they were claiming the credit for it.”

This wasn’t the only case where Dyson’s patents were being infringed. In 1999, Hoover US was also found guilty of patent infringement. In September 2013, Dyson initiated court proceedings against Samsung alleging they had infringed on Dyson’s steering mechanism patent, only to drop it later.

In 2002, Dyson stirred controversy when he moved production of his inventions from Malmesbury, North Wiltshire, to Malaysia, to cut labor costs. Some condemned the decision, given his cheerleading for British engineering industry. 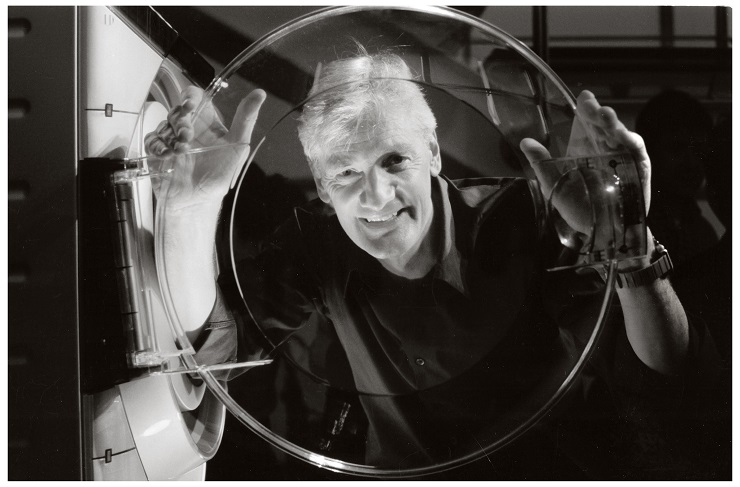 ‘Britain produces only 24,000 engineering graduates a year, compared with 450,000 in India and 300,000 in China,’ he said in an interview with The Telegraph. ‘We have a lack of respect for engineers here, in the way that the Japanese and Chinese do not. Britain has lost its confidence to engineer and make things. As our balance of trade sinks into the red, we have a choice: do we want Britain to be a theme park, or a hub of creative engineering? There is a bit of a “shoddy will do” notion about British manufacturing these days. Shoddy offends and irritates me. I want to see Britain back at the forefront. Patriotism? Yes, partly. What’s wrong with that?

‘Coupled with that is the fact that we are not fulfilling the potential of our children. To make and design things is a basic instinct. Yet we are not encouraging this in our young people.

In the 2000s, Dyson’s Airblade hand-dryer, which could leave your hands bone dry in 10 seconds, became a massive success. He pitched it to clubs, sports arenas, bars, and airports. From there on, James Dyson went on to make a ball-wheeled wheelbarrow to a supercharged fan and heater, a soundless Supersonic hair dryer, energy-efficient washing machine, and a bagless vacuum cleaner. Today, more than 2,500 people including top scientists and engineers work for Dyson and ship its products across 50 countries.

Dyson has even become a cultural signifier. In the Royle Family Christmas Special, Barb is moved to exclaim: “Ooh Valerie. What a Christmas! Implants and a Dyson!”

In 1999, he took over as chairman of the Design Museum from its founder Sir Terence Conran. Five years later, he publicly resigned in protest to the museum’s misguided pursuit of empty style over substance. They say, the final straw when a Terence Conran exhibition was canceled in favor of an exhibition on Constance Spry, the flower-arranger. In Dyson’s view, the museum’s focus on visual styling, rather the quirky, the graphics, had usurped over product and industrial design in the last decade.

Last year, Dyson announced record-breaking profits of £367m, up 13% on the year, despite spending £3m a week on research and development.

“James took a punt on the bagless vacuum cleaner about 18 years ago, without a team, without a hell of a lot of money. You’re better off being in a family-driven setup, where the family is the guardian of that technology and engineering focus.

The success of cordless vacuum cleaner, for which sales were up 68% in 2014, is a testament to the success of the Dyson ownership model. The entire company is owned by founder Sir James Dyson and his family.

Cordless vacuum cleaners can be used for just 20 minutes before needing a recharge. They now outsell traditional vacuum cleaners by three to one in Japan and by four to one in China. Similarly, the Dyson Humidifier is the top-selling humidifier in Japan by value. Geographically, Dyson took the number one spot in Germany in terms of sales and maintained its position as market leader in Japan. The group doubled the size of its business in China, despite the country’s economic slowdown.

“I have always found that the very moment you’re ready to give up, that if you go on a little longer, you end up finding what you’re looking for. It’s one of life’s rewards for perseverance.” – JAMES DYSON

James Dyson’s career and brand are built on innovation. Yet, if you read his book Against the Odds, the theme is ‘being comfortable with failure’, not innovation. In fact, the index of James’s autobiography pivots around the word failure, a curious affiliation by a man who is one of the richest people in Britain. Truth be told, James’s career and brand are built on failure, rather than immaculate triumph and achievement.

In a world, where the President-Elect of the United States callously paints the picture that success never-ever starts with failure, we need role models who can send a powerful message about the power of failure to the young, impressionable audience. We need leaders like James Dyson who exemplify a character trait that we want the future generation to have.

Anna Domanska
Anna Domanska is an Industry Leaders Magazine author possessing wide-range of knowledge for Business News. She is an avid reader and writer of Business and CEO Magazines and a rigorous follower of Business Leaders.
« Rex Tillerson could be a promising influence on U.S. Energy Sector
Over a Billion Yahoo Accounts Hacked: Biggest Security Breach Ever »
Leave a Comment
Close