Jaguar’s Reveals the Fastest and Most Powerful Jag Ever Built!

The Jaguar F-type Project 7 is fastest and most powerful beast built by Jaguar with a classic D-Type-inspired design. The phenomenal Jaguar F-type Project 7 was unveiled by Jaguar’s Special Vehicle Operations (SO) team at the Goodwood Festival of Speed 2014. The car is intended to be a cross between Bentley’s Mulliner and Mercedes’ AMG. The entire project was headed by former Land Rover brand guru John Edwards. A total of nine months were spend in its designing, structure, staffing and other activities.

“The Project 7 is already faster than the F-Type Coupe R on track,” says Paul Newson, Director of Special Vehicle Operations. “We expect it to be the fastest Jaguar ever around the Nurburgring, a lap time will come later.” 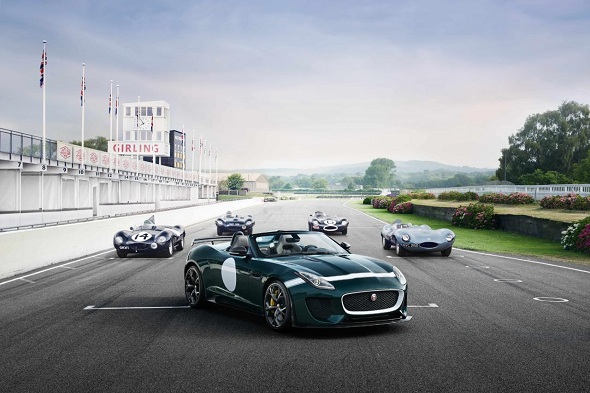 The Jaguar F-type is mounted with 5.0 –liter V-8 engine with output surpassing 575 horsepower. It is 25 horsepower more than that produced by the F-type R Coupe, and thus is now the fastest and most powerful machine built by Jaguar ever. The car can rocket 0-to-60 mph in 3.8 seconds with a top speed of 186 mph. It dons a D-type-inspired design with a new front and bumper. A few modifications in its downforce-increasing aerodynamic (177% more downforce) along with a carbon fiber, front air splitter, side skirts, rear diffuser and adjustable real spoiler cutting its body weight by 80kg. The production version has been transformed into a two-sweater from the single-seater concept version. The total weight of the F-type Project & is around 3,495 pounds.

“Project 7 is a single-seater sports car based on the F-TYPE, with the kind of racing-inspired form that designers dream about. It has one purpose: to be driven fast and enjoyed. Jaguar sports cars are known for exceptional performance and clean design. Project 7 captures that spirit in its purest form,” said Ian Callum, Jaguar’s director of design.

Project 7 comes with a removable roof, which can be folded and stored in the trunk when not in use.

A maximum of 250 Project 7 will be built with the first cars rolling out in mid-2015. It will be available in four colors – caldera red, white, ultra blue and British racing green. All models will flaunt white circles and stripes on the exteriors which is a removable option, while ultimate black or glacier white cars will get grey stripes. The car is handcrafted which is a slight hint that customers need to be prepared to pay anything for it.