Chopard. A Tradition of Excellence. 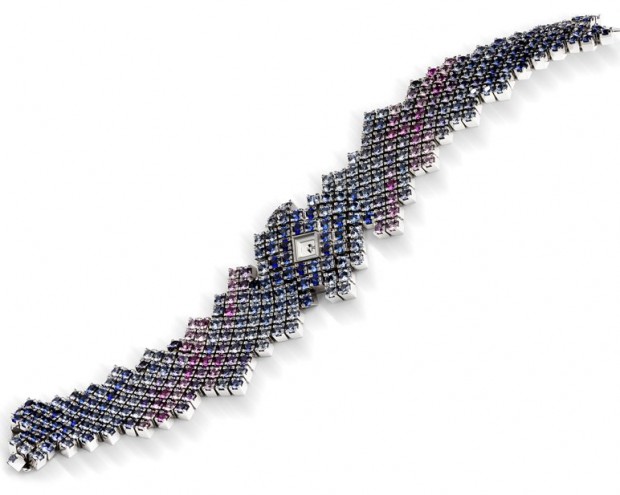 This amazing watch by Jaeger Le Coultre, the Joaillerie 101 Résille, makes a big impact with its combination of blue and pink sapphires and diamonds.

The cameo setting is in itself an artistic masterpiece that demands a very broad palette of gems to impart the desired fluidity to the colours. This fluidity is accentuated by the watch’s extreme suppleness as it coils gently around the wearer’s wrist.

The symbol of rigorous expertise and sensual aesthetics, it is the infinite expression of the patience and talent of the manufacturer’s designers and worksmen. Joaillerie 101 Résille houses the world’s smallest mechanical movement, its dainty size making it an exquisitely feminine piece of jewellery.

Antoine-LeCoultre, the founder of Jaeger Le Coultre, first started his watch-making workshop in 1833, when Swiss watch-making was still carried out in small home-run shops.

Being the first manufacturer from the Valle de Joux region of Switzerland, which is known for being home to the development of some of the world’s most complicated watch mechanisms, Jaeger Le Coultre has now become a major player in watch-making history, by becoming known globally as a leading high-end luxury watch and clock manufacturer.

Previously known as LeCoultre & Cie, the company was officially renamed Jaeger-LeCoultre in 1937.

In 1941, Jaeger-LeCoultre earned the highest distinction from the Neuchâtel Observatory for its tourbillon Caliber 170. In 1982, the Jaeger-LeCoultre museum was established in Le Sentier. In 2009, JLC produced the world’s most complicated wristwatch, the Hybris Mechanica à Grande Sonnerie with 26 complications.

With an impressive range of world firsts, superlative creations and legendary models to their credit, including the Reverso, the Duoplan, the Master Control, the Memovox Polaris, the Gyrotourbillon I and the Atmos, Jaeger-LeCoultre has now celebrated its 175th anniversary.

In addition to the super-intricate watches, Jaeger-LeCoultre has also produced other measuring instruments, such as speedometers and fuel meters, under the Jaeger brand.

While Jaeger speedometers and tachometers were supplied to British sports cars manufacturers such as Triumph, Jaeger instruments for automobiles were mostly used by the French automobile-makers like Citroën, Peugeot and Renault. Jaeger automobile instrumentation has also been used by Italian automobile brands like Ferrari.

On March 15, Novogratz went so far as to predict that the Bitcoin future price will reach half a million dollars per coin by 2027. He made this statement at the Bitcoin 2022 confer
8 hours ago

Managers and HR personnel must be coached on how to compassionately convey the message as it is one of the most difficult conversations an individual can have. Open and honest comm
10 hours ago