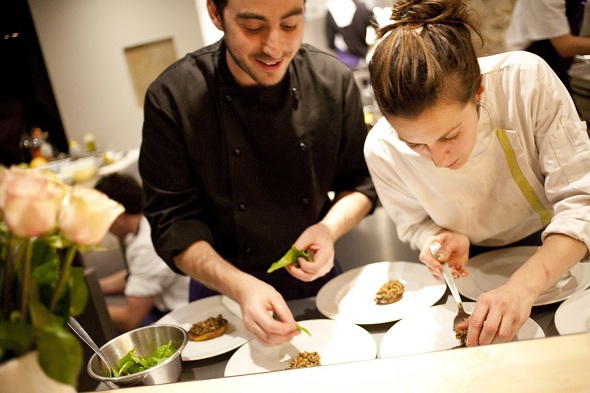 Daniel Rose, age 36, is the owner of Spring in Paris, a 40 seat modish French restaurant that mixes classic French cuisine with fresh and seasonal menu that is constantly reinvented.  Spring, is booked in advance and takes the impossibility of making reservations to a whole new level. What’s even more alluring is the journey of this cheerful young American who broke into the Paris food scene and has created a gastronomic sensation in Paris. Spring has been at the forefront of the Parisian dining scene and continues to live up to its hype.

Originally from Wilmette, Illinois, a suburb of Chicago, Rose comes from a very modest background. Rose then, moved to France over a decade ago, to study at the American University of Paris. After spending a year at the Institut Pail Bocuse in Lyon, the young man served as an apprentice at Bruneau Restaurant in Brussels.

In 2003 Rose landed his first gig as a head chef, running a kitchen and managing a team. A year later, he moved back to Paris, where he joined the hotel Le Meurice, working under three-star chef Yannick Alléno. Rose then has a few brief stints at Auberge des Abers in Brittany and Le Pré du Moulin in Sérignan du Comtat, near Avignon, all combined into an enriching experience that would define his life for years to come.

When Rose was working under French chef, Jean-Luc L’Hourre, a Meilleur Ouvrier de France 2000, at the Auberge des Abers in Lannilis, in Brittany, he had the gained the most influential culinary learning. He’s often cited calling Jean-Luc L’Hourre his mentor. During this time, he discovered that it’s quite a difficult job to be a chef, and requires a lot of work, a lot more training and it would be an even longer journey, and regardless you must always enjoy the process of learning even if it is never-ending.

There were a few other Michelin influential top chefs including Bocuse, Jean-Pierre Bruneau, and Yannick Alleno who helped him learn the basics in the world of soulful and joyous cooking. Rose discovered that kindheartedness is a key ingredient to success. It can be measured from the way you run your kitchen to the way you treat your associates. Alleno helped him realize that it’s all about cheerful cooking, while the rest is all style. Bruneau, on the other hand helped Rose discover that sometimes it’s better to have exceptional skill and good products than to be a creative genius.

In early 2006, Rose made the decision of honoring the city of lights with French cuisine. He opened the first Spring Restaurant, with a modest 16 seats in the 9th Arrondissement, a 17th century building. He quicly won over critics and became a darling chef amongst reviewers such as Michelin Guide, Le Figaro, and many food enthusiasts. A time came, when wait for dinner tables reached five months! This is when Rose knew he needed a much bigger place to serve, and hence in the summer of 2010, he moved near the Louvre in the Les Halles neighborhood. The current Spring restaurant is almost ten times as large as the original one with 2,100 square feet and a huge open kitchen.

What makes Spring Special? David Rose explains, “Freshness and quality are part of the DNA so everything served at Spring is in season and from not too far away. If the mission is deliciousness, then everything starts with the product. You can never make a bad carrot taste good, no matter how technically proficient or talented you may be.”

Spring is notoriously difficult to get into. Since its establishment, Spring has balked up several trophies under its name such as one of the “10 of the Best Restaurant in Paris” and “The Trophy Reservation” by Forbes. Rose and Spring have been profiled in the Chicago Sun Times, Elle, L’Express, GQ, International Herald Tribune, New York Times, Travel + Leisure, The Wall Street Journal, and numerous other publications. Remember when we mentioned Rose being a darling amongst the press?

Let’s hear it from the man about the whole madness. “As of mid-February, we were booked through June. That said, things are always shifting and changing. We do our best to accommodate those who want to dine with us and with a little patience and flexibility; we end up accommodating most requests. Trick of the trade: send us an email, and a lunch reservation is often easier than dinner – we’ll even make you the full dinner menu if we know that you’d like it in advance.”

The most rewarding experience that Rose gets is from the jovial people he gets to work with, his beloved customers, and his suppliers. He believes that each day bring an unknown and exciting adventure. He lives off the feeling of compassion watching the success of those around him.

“I like to think of Spring as celebration of the French tradition,” says Rose. “It’s all about abundance, generosity, quality and simple tastes.”

People often ask him, if he’s keen on opening a second restaurant. It then you get a glimpse of his entrepreneurial skills, Daniel Rose says, “I’m very much in the phase where I’m learning how to run a restaurant, be the chef, manage the team, keep my eye on the books. In order to run a successful restaurant, you have to be good at all of them. You have to be at least good or know whom to give the tasks to.”

“In Paris it’s not business. There are people that are interested, but it’s not about business. It’s about gourmandise. It’s about eating,” he added. We guess we already know.