The $25 billion nuclear fusion research and engineering megaproject is designed to emit plasma of 500 megawatts (thermal) for about twenty minutes.

International Thermonuclear Experimental Reactor or ITER, in short, is international nuclear fusion research and engineering megaproject funded by the member countries of European Union, China, India, Japan, Russia, South Korea and the United States. The project is considered the world’s most massive magnetic confinement plasma physics experiment to date. The project is conducted in an experimental reactor built near the Cadarache facility in Saint-Paul-lès-Durance in southern France.

The reactor is designed to emit plasma of 500 megawatts (thermal) for about twenty minutes while 50 megawatts of thermal power is safely injected into the tokamak. This would lead to a ten-fold output of plasma heating power. The project aims to demonstrate the principle of emitting more thermal power than the usual to heat plasma. The electricity consumed by the research reactor ranges from 110 MW up to 620 MW peak for 30-second periods during the plasma operation.

The construction of the ITER tokamak complex started in the year 2013. The total costs of construction and operations are of the project is expected to be more than €20 billion. Including the seven-member countries, around 35 countries are participating in the project directly or indirectly. The ITER project aims to bootstrap the global nuclear fusion industry. It also aims at demonstrating scientific and technological feasibility of fusion energy for peaceful use in future. 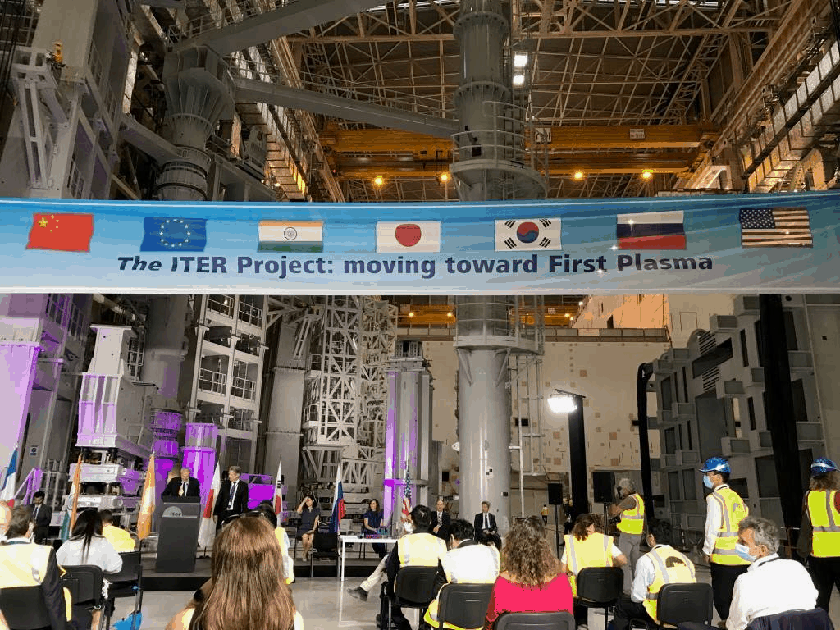 The total costs of construction and operations are of the project is expected to be more than €20 billion.

ITER in the news

ITER recently entered its five-year assembly phase. After this, the facility will be capable of generating the super-hot “plasma” that is required for creating fusion power. According to experts, fusion can be a clean source of unlimited power that would help tackle the ongoing climate crisis. The current nuclear energy relies heavily on fission, where a substantial chemical element is effectively split to produce lighter ones. Nuclear fusion, on its part, works by combining two light elements to produce a heavier one. This results in energy production with minimal radioactivity.

France‘s President Emmanuel Macron stated that the project effort would unite countries around a common good aim. The facility might well see plasma generated in the machine shortly after the assembly phase ends in 2025. “Iter is an act of trust and confidence in the future. The greatest advances in history have always erupted from daring bets, and journeys bogged with difficulties. Though initially it always seems that the obstacles are greater than the will, Iter belongs to a spirit of discovery, of ambition, that would overcome those obstacles and with the idea that tomorrow may be a better day than yesterday,’ Macron stated.

Prof Ian Chapman, chief executive of the United Kingdom Atomic Energy Authority (UKAEA), stated: “This is a highly exciting phase of the project for all. Most of us switch to fusion to change the world and to make a massive difference as to how we provide clean energy for future generations. We all look forward to Iter to succeed. We hope to see the first plasma creation in five years. It will be a short plasma, lasting only a few milliseconds, but demonstrating all the magnets work. After that, there would be a further stage of assembly of other components. The project is surely creating milestones.”

Experts believe that Iter can overcome the technical difficulties and given the planetary challenges being faced, fusion is worth the expense and effort. The United Kingdom is a member of the Iter project. However, it is set to fall out, as the government withdrew from the Euratom treaty as a part of Brexit.

Christy Gren
Christy Gren is an Industry Specialist Reporter at Industry Leaders Magazine she enjoys writing about Unicorns, Silicon Valley, Startups, Business Leaders and Innovators. Her articles provide an insight about the Power Players in the field of Technology, Auto, Manufacturing, and F&B.
« Cadillac Showcases LYRIQ, the first from its EV portfolio
McDonald’s sues ex-CEO Easterbrook, wants him to compensate the company »
Leave a Comment
Close