iRobot, the company that makes the popular line of automated robot home vacuums has announced its newest video collaboration robot which is ready for delivery. 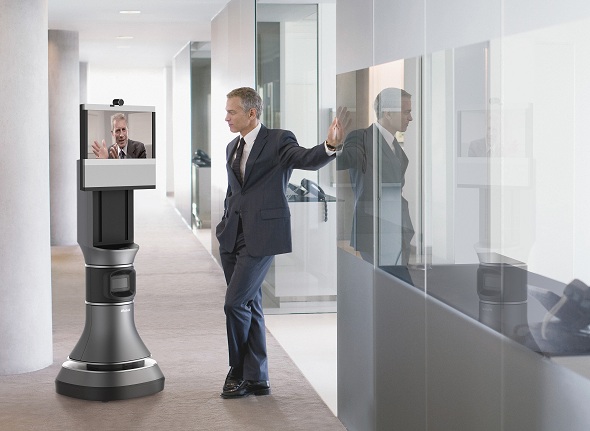 The robot features a 21.5-inch LCD screen and an automated navigation system and so it can move around while transmitting a video of the users face. Efficacious microphones and cameras gather and transmit surrounding audio and video back to the user. Users can control the robot via an Apple iPad; manage the Ava 500 into rooms and down hallways. The so called Telepresence robots are a new niche of products that hope to make the video conferencing a better experience for companies.

Ava 500 robot is as an extension of the standard video call or teleconference session without the limitation of being in one room or offering a single or limited number of views. The Ava 500 robot  can manoeuvre throughout the halls of a building while providing video communications to remote users and also associate with co-workers in areas that would otherwise be difficult, such as hallways, manufacturing floors, data centers and laboratories.

In addition, the robot can map out a building by tapping a location on a map or choose a location or employee name then be programmed to arrive at the desired location at a scheduled time without any intervention by the user and initiate the call using a Cisco TelePresence EX60. The user can also alter the height of the TelePresence display to move between a standing and sitting position, and to tilt the camera. At the end of the meeting, the robot will automatically return to the charging station.

Besides, the Ava 500 also includes encryption, secure HTTPS management and password protection for enterprise-level security, and integrated wireless via Cisco’s Aironet 1600 wireless access points. Management is through iRobot’s Ava 500 Cloud Service, which handles the robots, follow its schedule and supervise the robot’s health.

According to Rowan Trollope, senior vice president and general manager of Cisco’s Collaboration Technology Group, the robot is another way to widen the reach of video conferencing throughout an enterprise.

The Ava 500 is being demonstrated this week at the Enterprise Connect 2014 Conference in Orlando at Cisco’s booth and that of Yorktel, an Ava 500 reseller. The new robot is on sale in the United States, Canada and Europe for $70,000 or can also be leased for around $2,500 per month.