Cathie Wood. Investor. Catherine Duddy Wood, popularly known as Cathie Wood, is an enigma investors would love to solve. Known for taking unconventional risks, she is the CEO and CIO of Ark Invest, an investment firm that poured money into Tesla and crypto way before it was considered fashionable to do so. Her flagship fund, Ark Innovation, also holds stakes in Zoom Video, Roku, CRISPR, and UiPath.

A few days back, she shocked Wall Street by claiming that the next bout of volatility experienced by crypto will favor Bitcoin. She expects Bitcoin to make a comeback in the coming months and advised investors to sit tight. She also mentioned that she feels inflation has crossed its peak. It sounds almost preposterous to most and one cannot help but wonder how Cathie Wood investor speaks with such conviction.

Her fund ARK Innovation ETF has lost over half its value in the past one year. But she has better things planned. The AOT Growth and Innovation ETF (ticker AOTG) is set to be listed soon while most investors worry about inflation. It will focus on investing in companies with high growth potential and low marginal costs. 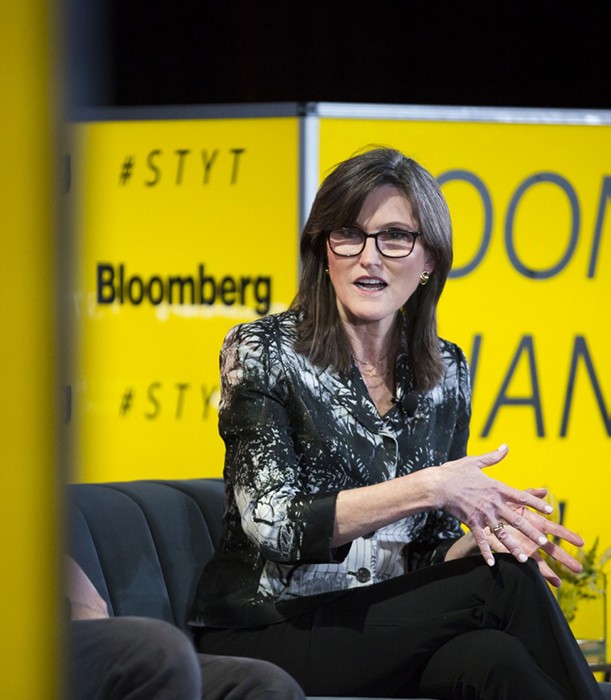 Founder of ARK invest, Cathie Wood has a portfolio that ranges from self-driving cars and genomics.

So, who is Cathie Wood? She wears many hats – mother, investor, devout Christian, amongst others. But people have always found it tough to fit her into a box.  Back in 2018, when experts mentioned that Tesla stock is extremely expensive in comparison to its value, her fierce defense earned her fans and critics in equal measure. Her bets on less-than-favorable companies, which have often proved her right, have given the tag of controversial investor. She manages over $85 billion and is fearless. She values transparency and shares her decisions to buy and sell companies daily to any investor who signs up for her email updates.

Her mentor Arthur Laffer, 81, and an economic genius, attests to the fact that he has never seen a more research-oriented person in his entire life. Ark’s investment product of choice is actively managed exchange-traded funds that allow investors to buy and sell stocks on the same day. The company’s hiring MO is also unconventional to say the least. Wood is also known to hire critics of the financial industry who eventually helped the firm plan out its strategy.

While risk-averse Wall Street likes keeping things secret, Wood’s firm reveals its strategies through social media, newsletters, and encourages investors to do their own thing.

Cathie Wood investor is known as a rock star of sorts as her ARK Innovation fund, known by its ticker as ARKK, returned some 157 % during that first year of the pandemic, compared to just 18% for the S&P 500 as a whole. However, this year share prices have tumbled and those who followed her advice have come full circle. Some experts call her successful, while some scathingly say that she is successful at failing.

Wood revealed on her “Jesus Calling” podcast that in 2012, she felt the Holy Spirit telling her to use her experience as an investor to build a new money management firm. She decided to take the plunge and put her savings on the line to build a company that will be transparent and modern. The question who is Cathie Wood will give you different answers depending on whom you are asking.

“Most of my friends told me I was nuts, and yet I wasn’t listening to them. I knew that I needed to follow God’s will for me,” she told a Christian ministry organization in 2016. “That was the only way I was going to be happy.” Her company Ark has been named after the Ark of the Covenant, a major part of Jewish and Christian history.

Her transparency in business also helped her connect with a diverse range of people, from artists to religious conservatives.

Despite the polarization that Cathie’s personal and professional beliefs bring to the table, she is one of the most watched and followed investors of the decade.

Christy Gren
Christy Gren is an Industry Specialist Reporter at Industry Leaders Magazine she enjoys writing about Unicorns, Silicon Valley, Startups, Business Leaders and Innovators. Her articles provide an insight about the Power Players in the field of Technology, Auto, Manufacturing, and F&B.
« Virginia Will Be Home to a Billion-Dollar Lego Manufacturing Plant
Germany Uses Coal Fired Power Plants to Brave Winter »
Leave a Comment
Close