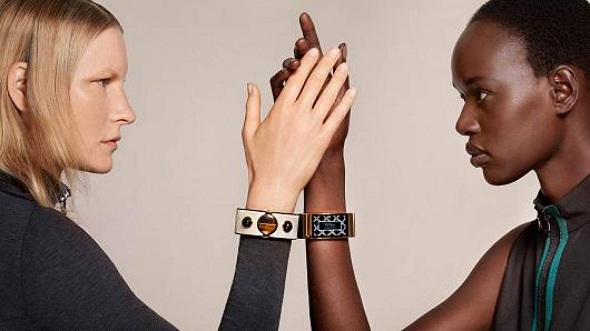 The bracelet will be available at Open Ceremony’s worldwide retail outlets and select Barneys stores by the December holiday season, Intel said.

Earlier in January, Intel announced it would be working with designer Opening Ceremony to develop a smart wearable device that was also fashionable. On Wednesday, the company revealed its first luxury smart bracelet aimed specifically at women.

The high-end wearable includes communications capabilities and is both bejeweled and digitally enhanced. The feminine fashion accessory is called MICA, or “My Intelligent Communication Accessory,” is the product of landmark alliance between Intel and fashion house Opening Ceremony, the company said.

MICA will be sold as an Opening Ceremony product. The bracelet will be available at Open Ceremony’s worldwide retail outlets and select Barneys stores by the December holiday season, Intel said.

“As a feminine accessory blending seamlessly into everyday life, MICA ushers in a new era converging fashion and technology by integrating a woman’s luxury accessory with technology in order to complement and enhance a woman’s work and social life,” Intel said in a statement.

While there wasn’t much information on the technological functionality of the luxury bracelet ahead of its launch, but Intel said the device can display notifications and alerts, including calendar reminders, SMS messages, meeting alerts and other notifications sent directly to the wrist display. Additionally there is also a two-way wireless data communication through a built-in XMM6321 3G cellular radio and will be available without the need to pair with a smartphone. The device can be charged using a USB cable or wirelessly. The company declined to say which platform or operating system it’s using, but said it’s already working with software developers to create apps, and plans to provide more details on the bracelet’s capabilities in October.

MICA, which features a curved 1.6-inch scratch-proof, sapphire glass touchscreen display will come in two versions, one will have black water-snake skin, adorned with freshwater pearls from China, and lapis stones from Madagascar, while the other sports a band made of white water snake skin tiger’s eye gems from South Africa and obsidian from Russia.

With the wearables space drawing in a lot of competition from the likes of Samsung, LG, Apple and others, the market could provide huge gains for a company like Intel. At this year’s Consumer Electronics Show, Intel CEO Brian Krzanich showcased several prototype IoT designs including heart-rate-tracking headphones, a smartwatch and an innovative bowl-shaped wireless device charger. It was later revealed that some of those demo devices had ARM-based chips inside.

While this luxury accessory wouldn’t come cheap, it is expected to land under the $1,000 threshold, probably closer to $500.