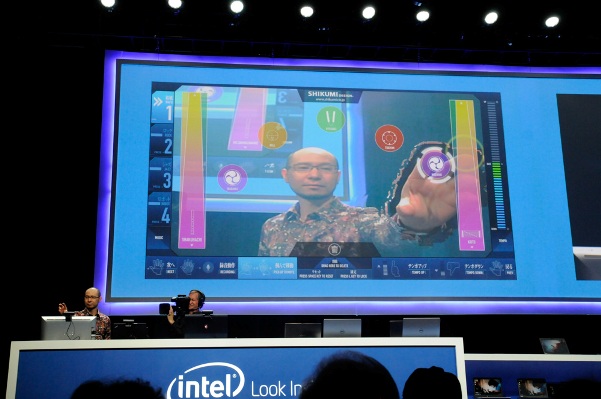 With PC sales falling and the smartphone market narrowing as competition between tech giants like Qualcomm and Samsung electronics tightens, Intel is trying to get back into business through the introduction of its new RealSense technology line and several wearable electronic gadgets, such as smart stereo earbuds and movement-sensing bracelets, that may catch consumers’ attention.

Within the catalogue of new products that Intel announced during the International Consumer Electronics Show (CES) in Las Vegas, the audience found new software and hardware technology that aims to foster the use of touch, voice, gestures, and other “human-like senses” in devices power-driven by the firm microprocessors.  The star in the new RealSense technology line is the fresh extra thin 3D camera, which can be implanted in tablets, notebooks, and other devices. The company described its new baby as the first integrated 3D depth and 2d camera module able to help devices see depth much like human eyes. The product will include a 1080 p color camera and a depth sensor. It is planned that the optic tool will be integrated into Acer, Dell, Asus, Hewlett-Packard, Fujitsu, NEC, and Lenovo devices during the second half of this year.

The RealSense technology line is also considered to be included in Microsoft’s Skype videoconferencing technology and Intel announced that it is soon partnering with the Redmond tech giant. According to Intel, its new software can extract a human face from an image by using its live background removal technology, which will enable users to easily change the background of their conferences in real time.

From PCs to wearable electronic gadgets

Intel unveiled more surprises during its presentation in the CES, for instance, it introduced a tiny computer built with Intel’s low-power Quark technology and packed up in an SD-card form with the intend of making it easy for clothing and gadget makers to integrate this platform into wearable electronic gadgets. Furthermore, Barneys New York, a luxury department store, is collaborating with the tech firm to develop smart bracelets that look as designer accessorizes rather than technological gadgets. In addition, Intel presented its new smart stereo earbuds, which will be able to measure the user’s heartbeat through their ears and include a microphone jack that connects to the wearer’s smartphone instead of a separate power source. Also, the smart stereo earbuds have an integrated software that changes automatically the melodies being played so that the wearer is encouraged to slow down or speed up their workout depending on their hear rate.