The Ins and Outs of a Successful co-CEO Leadership model 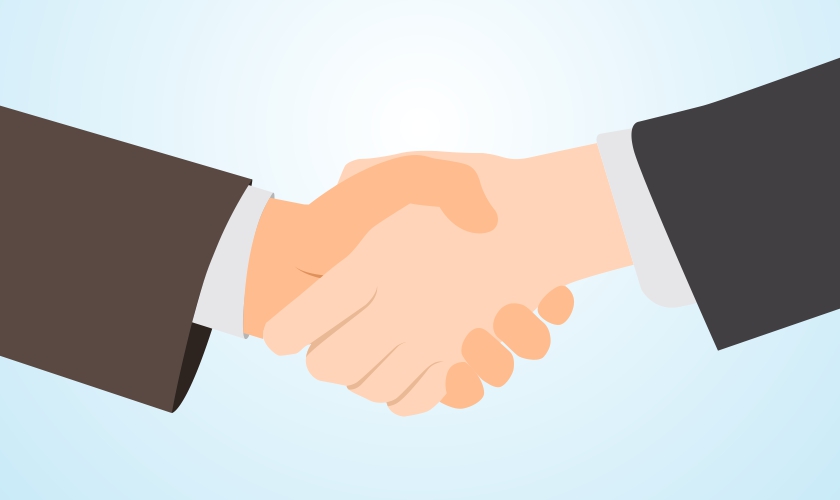 Firms, much like countries, operate at maximum efficacy and efficiency when there is one chief executive officer, one goal or one purpose. However, in recent years, an increasing number of Fortune 500 companies – including Whole Foods, IMAX, Chipotle and Bed Bath & Beyond – have implemented a successful co-CEO leadership model. In most of the cases, one of the CEOs is the founder of the company. Samsung Electronics Co., the world’s largest maker of memory chips and smartphones, however, is an anomaly, with three CEOs to steer the company’s fortunes.

When the authors of a new study studied the impact of dual leadership on a firm’s return on equity (ROE), it was found that there is a much complex relationship between the co-CEO structure and a firm’s bottom line. Things run smoothly when there’s a “first among equals.”

While, the co-CEO system may appear to benefit the firm most when there exists a significant power gap between the two leaders, influence over strategic decisions is placed upon the hands of one of the two CEOs.

This, largely depends on how the two successors are able to maintain an equilibrium. For example, if the power gap is increasingly wide, company performance may begin to slump. This suggests that there is an astronomical difference in the influence over strategic decisions given to the two CEOs, which will eventually result into a communication breakdown throughout the firm, distrust and ultimately, the firm’s performance.

But, one CEO isn’t always better than two heads

What exactly prompts a co-CEO leadership model? Before Industry Leaders gets into detail, let’s first look at a breakdown of the circumstances prompting two or more successors. 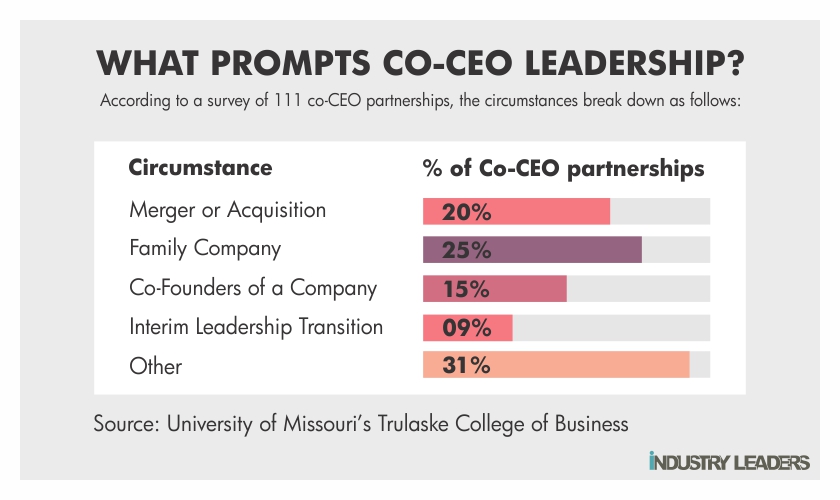 There are plenty of reasons to employ co-CEOs. Sometimes, two firms merge and want to keep a dual-leadership. On other occasions, siblings jointly assume the control of the family business. Whatever the case is, the co-CEO arrangement works when there is a clear distinction of the roles and responsibilities. When the other chief executive doesn’t resort to acrimony and finger-pointing, and vice versa.

In most cases, dual-leadership brings both job complementarity and education complementarity (e.g. one CEO with an MBA or law degree, and the other with an engineering degree). Complementarity in terms of responsibilities and backgrounds allows companies to bank on a broader set of experience and ideas to develop a strategy or make a decision.

In today’s global economy, it is becoming increasingly difficult to bring on board executives who have extensive experience and skill sets, much needed for the sheer volume of decision-making. If a company has a top leadership need in more than two areas, why not appoint two or more heads and take advantage of what the co-Leaders bring to the table?

Consider what happened at Apple when Steve Jobs was removed from his own company. Apple lost its vision and identity, which eventually led to the numerous unresolved leadership crisis. For many firms, losing their identity is an undesirable by-product of bringing on board a different leader. This is why companies like Chipotle Mexican Grill Inc. and supermarket Whole Foods Market both have two CEOs. The possibility of the success of the co-CEOs system enhances when the founder is comfortable sharing his or her responsibility to a trusted individual.

The market value of co-CEO structure

Below is a table showing the market’s response in various scenarios to a co-CEO leadership model. In all cases, the impact was both progressive as well as significant, to suggest that market generally views dual leadership model as a positive development.

Professor Stephen Ferris of the University of Missouri, who performed extensive studies of the effectiveness of dual leadership found that the market reacts positively and significantly to the announcement of two successors.

Bottom line: A co-CEO system might be a good idea when there is partnership and friendship, when there’s a clear distinction of the areas of responsibility.

Anna Domanska
Anna Domanska is an Industry Leaders Magazine author possessing wide-range of knowledge for Business News. She is an avid reader and writer of Business and CEO Magazines and a rigorous follower of Business Leaders.
« GoPro Earnings: Beats Estimates, Delays its Drone Launch
BMW VISION NEXT 100: The Car of the Future »
Leave a Comment
Close