Innovators at Stanford University and the Department of Energy’s SLAC National Accelerator Laboratory have created an electrode designed like a pomegranate – with silicon nano particles bunched like seeds in an intense carbon skin. What so special about this creation is that, it beats some remaining barriers to utilizing silicon for a new generation of smaller, lighter rechargeable lithium-ion batteries.

Yi Cui, copartner educator at Stanford and SLAC who headed the study, remarked that while a few challenges still remain, the configuration brings us closer to using silicon anodes as a part of smaller, lighter and more influential electric cells for items like cell phones, tablets and electric cars. 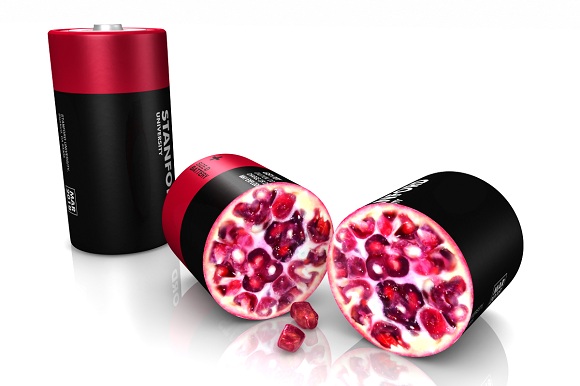 Analyses demonstrates that pomegranate-inspired anodes work at 97 percent capacity much after 1000 cycles of charging and discharging, which puts it well inside the coveted extent for commercial operation.

The anode, or negative electrode is where energy is stored when a battery charges. Silicon anodes could store 10 times more charge than the graphite anodes in today’s rechargeable lithium-ion batteries.

The brittle silicon swells and falls apart during charging, and it responds with the battery’s electrolyte to form gunk that layers the anode and debases its performance.

In the course of recent years, Cui’s team has handled the breakage problem by using silicon nanowires or nanoparticles that are too small to further break in smaller bits and encasing the nanoparticles in carbon “yolk shells” that provide for them room to swell and shrink during charging. The new study expands that work. 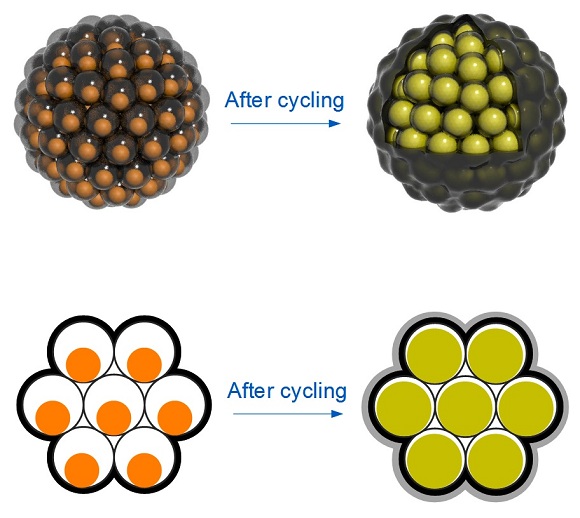 Silicon nanoparticles swell during battery charging to completely fill their yolk shells;
No space is wasted, and the shells stay intact.​

Graduate student Nian Liu and postdoctoral researcher Zhenda Lu utilized a microemulsion technique common within the oil, paint and nonessential commercial industry to assemble silicon yolk shells into groups, and cover each one bunch with a second, thicker layer of carbon. These carbon skins hold the pomegranate groups together and give a strong highway for electrical flows.

Furthermore since every pomegranate bunch has only one-tenth the surface territory of the distinct particles inside it, a much smaller region is presented to the electrolyte, along these lines lessening the measure of gunk that forms to a manageable level.

In spite of the fact that the groups are so little it is not possible see exclusively, together they structure a fine black powder that might be utilized to cover a bit of foil and structure an anode. Lab tests demonstrated that pomegranate anodes worked well when made in the thickness needed for commercial battery performance

While these tests indicate the techniques work, Cui said the group will take care of two more issues to make it suitable on a business scale: They have to streamline the procedure and discover a cheaper source of silicon nanoparticles. One plausible source is rice husks: They’re unfit for human sustenance, produced in tons and are 20 percent silicon dioxide by weight. Consistent with Liu, they could be transformed into pure silicon nanoparticles easily.

The study was published in the journal Nature Nanotechnology.