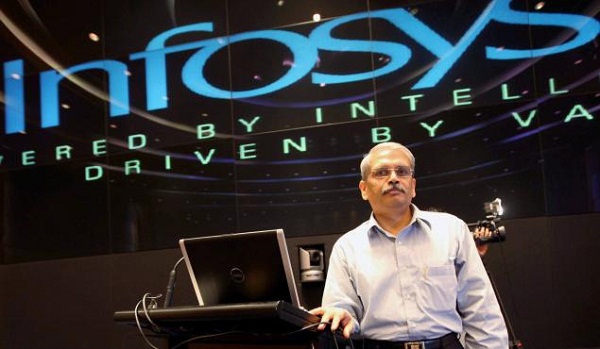 Infosys Ltd., India software services provider, disappointed investors with weaker-than-expected margins and a revenue outlook that it left unchanged. Infosys’ shares dropped by approximately 9 percent, the most in six months despite the fact that the company saw a 24 percent growth in profit for the quarter that ended in September from the same period last year.

Infosys Ltd., the company listed on the NASDAQ Stock Market in India, has informed that it expects revenue of at least $7.34 billion for the fiscal year ending March, unchanged from its last outlook. The company’s estimate represents a growth of approximately 5 percent from the previous fiscal year. However the Infosys’ outlook excludes revenue from its acquisition of Lodestone, a Swiss consultancy. The company also cut its view for fiscal-year earnings per American Depository Share to approximately $2.97 from $3.03 previously, adjusting the view for the currency exchange rate though. As a result of the Infosys’ earnings report, company’s shares dropped roughly 8.8 percent.

Analysts had predicted that the company would change the revenue outlook to approximately 6 percent because of its acquisition of Lodestone. Back in July, Infosys Ltd. decided to cut its outlook from 8-10 percent growth to 5 percent.

Infosys Ltd., whose clients include, inter alia, Bank of America, Volkswagen and GlaxoSmithkline, added 39 new clients in the last quarter. It is the slowest pace in six quarters.

The changing of the guard at Infosys

Infosys Ltd., the Bangalore-based company, has been struggling to maintain the growth as it seeks a position of a first-class player in the market. However in January the Infosys’ officials started warning its investors that the global economic slowdown and crisis in Europe would affect the company’s earnings.

Certainly the challenging economic conditions, including the crisis in the eurozone, the economic  slowdown in China, etc. make also clients less confident, not to mention that  decision making process is also being slowed down. Without a doubt Infosys Ltd. was affected by economic troubles in its main markets of the U.S. and Europe as companies have been cutting spending on investments in outsourced technology projects. But competition is more and more aggressive as well.

Anna Domanska
Anna Domanska is an Industry Leaders Magazine author possessing wide-range of knowledge for Business News. She is an avid reader and writer of Business and CEO Magazines and a rigorous follower of Business Leaders.
« Foxconn and China Face Harsh New Light Owing to Injury of Worker
RBS looks for another buyer for 316 branches as Santander walks away from £1.65bn deal »
Leave a Comment
Close